From the Eyes of Alumni: Christmas Around the World 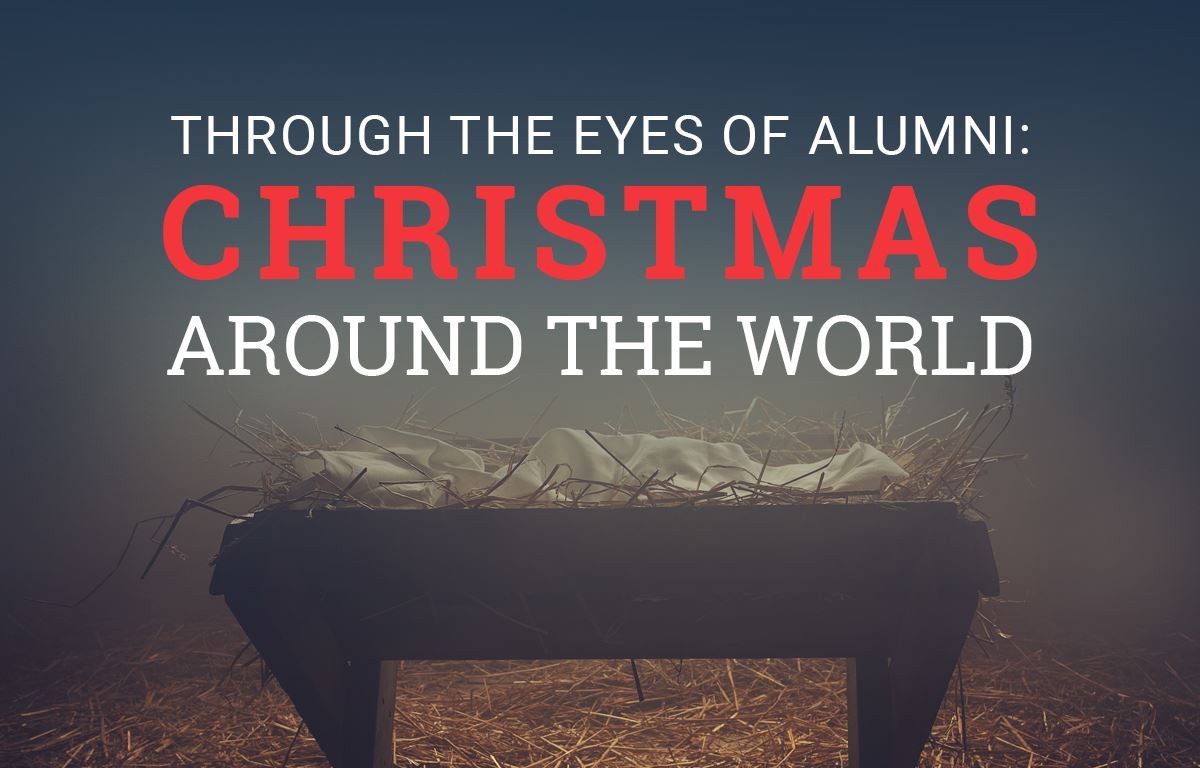 “All the people.” The angels brought their great and joyful news to the shepherds on a specific date in a specific Jewish city, but the message they shared, of God in the flesh, the Savior who came to die and offer forgiveness from sins, is truly for every tribe, tongue and nation.

It is a theme that we at The Master’s University explored this December during our 34th annual Come ChristmasSing concert series, aptly titled “Joy to the World.” But, as December marches on and Christmas Day approaches, the trappings and traditions of an American celebration can mask the true universality of the gospel message.

In many ways, Christmas in the United States crosses religious, cultural and generational lines. As a country, we collectively purchase fir trees for our homes, string lights around our roofs, exchange gifts with family and friends, and sing carols about the birth of Jesus Christ and the joys of the winter season. Even in Southern California, we at The Master’s University break out the hot cocoa and Christmas lights and brace ourselves for the temperature to dip into the 70s.

Around the world, Christmas may look very different than the “picture print by Currier and Ives” that we are used to in the U.S., but in each location the holiday provides a similar opportunity to share the gospel message.

This year, The Master’s University caught up with several alumni who are serving as missionaries in countries from South America to Central Asia to learn more about the opportunities that Christmas provides them in their distinct cultures.

Matt (’94) and Kim (’95) Davis are currently serving with the Evangelical Free ministry ReachGlobal in London, where they are “engaged in church planting, sports ministry, arts ministry, and discipleship,” Matt said.

In the United Kingdom, the Christmas season often attracts many unbelievers to church for special concerts and services. Families enjoy traditional foods such as minced pies, Christmas pudding, and mulled wine. And, many schools put on nativity plays.

But, in a country where less than 2 percent of the population is truly Christian, “Christmas is intensely secular,” Matt said. He explained that the story of Jesus’ birth is viewed similarly to the story of Santa Claus—just a traditional Christmas tale. And those Christmas concerts that attract the unchurched often also elicit complaints because they include a short gospel message.

“A friend of mine who is a conservative evangelical vicar commented to me that his Carol Service is often the most controversial event of the year,” Matt said, “as guests will (send) a litany of emails following the service, voicing their displeasure that he gave a 10-minute Bible talk at the end of the service. They contend that they came for carols, not a Bible story. This demonstrates the disconnect between the true meaning of Christmas and the vast majority of people living in the UK.”

In predominantly Catholic Costa Rica, Joel (’15, MABC) and Krista (’14, MABC) McCutcheon provide biblical counseling for missionary families throughout Latin America, after having served for more than 10 years as missionary videographers around the world.

The MuCutcheons shared that in Costa Rica, Christmas Eve is the centerpiece of many celebrations and that time with family is emphasized.

“By law, every employee in Costa Rica receives their ‘13th month’ salary at the beginning of December, so everyone looks forward to the holidays,” they said. “We’re just getting out of the rainy season so it starts getting hot in December, and Costa Ricans love to go to the beach or mountains over their break.”

In countries with a Christian cultural heritage, like the United Kingdom and Costa Rica, Christmas is familiar to most people, even if they do not accept its biblical origin. But in counties with Muslim or Hindu cultures, Christmas is a curiosity, an often-misunderstood foreign holiday.

Eric (’00) and Heather (’01) are currently involved in pastoral training and church ministry in the Middle East, where “Christmas Day is just another normal working day,” Eric said.

The fact that Eric and Heather and their fellow Christians are celebrating at all provides an opportunity to tell Muslim neighbors and friends about the meaning of Christmas.

“Some think that Christians worship the Trinity of Jesus, the Virgin Mary, and Santa Claus.” Eric said. “So, in talking with our friends at Christmas, we have the opportunity to clear misconceptions and share good news.”

This effort culminates in a large Christmas Eve service at their church, where gospel in preached to the many unbelievers in attendance. Eric said that the truth shared at past services has already borne fruit in the lives of many new believers.

Another alumna and her husband live in Delhi, India, where they run Passion Movement International, a nonprofit organization that offers tutoring to poor children. Because many of the tutors are unbelieving students from Delhi University, the ministry also affords them the opportunity to share the gospel.

In Hindu-dominated India, holidays like Diwali take precedence. Usually celebrated in October or November, Diwali creates a similar atmosphere to Christmas in the U.S. “All the shops have Diwali sales and everyone is out shopping for gifts and firecrackers and lights to decorate their homes,” the alumna said. “We walk around the community looking at all the decorated, lit-up homes. It’s what you would imagine Christmas fever to be like in USA, but it’s not Christmas! They are celebrating the return of a Hindu god.”

She further explained that Christmas is a minor holiday in India, but schools and government buildings are still closed because the Indian government allots a certain number of holidays to each religion. To help their unsaved friends and neighbors understand the true meaning of Christmas, their church family goes Christmas caroling and holds Christmas services in both Hindi and English.

“Our (church) chooses to not have any Santa Claus because people here only know Christmas related to Santa Claus,” she said, “and they were probably taught in their convent school about Jesus in the manger—no concept that a Savior has been born to save His people from their sins… Christmas here in Delhi forces us to remember what it is really all about, without too much distraction of the clutter.”

“…for today in the city of David there has been born for you a Savior, who is Christ the Lord” (Luke 2:11).

Centuries earlier, Isaiah prophesied that this coming Savior would “bring forth justice to the nations” (Isaiah 42:1).

Millennia after the birth of Christ, the Lord is still fulfilling Isaiah’s prophecy through His faithful servants around the world.

And as the alumna in Delhi said, “It’s the greatest time to proclaim Jesus Christ, and we take every opportunity to proclaim what He has done for each of us.”