Following Christ in the Throes of an Election 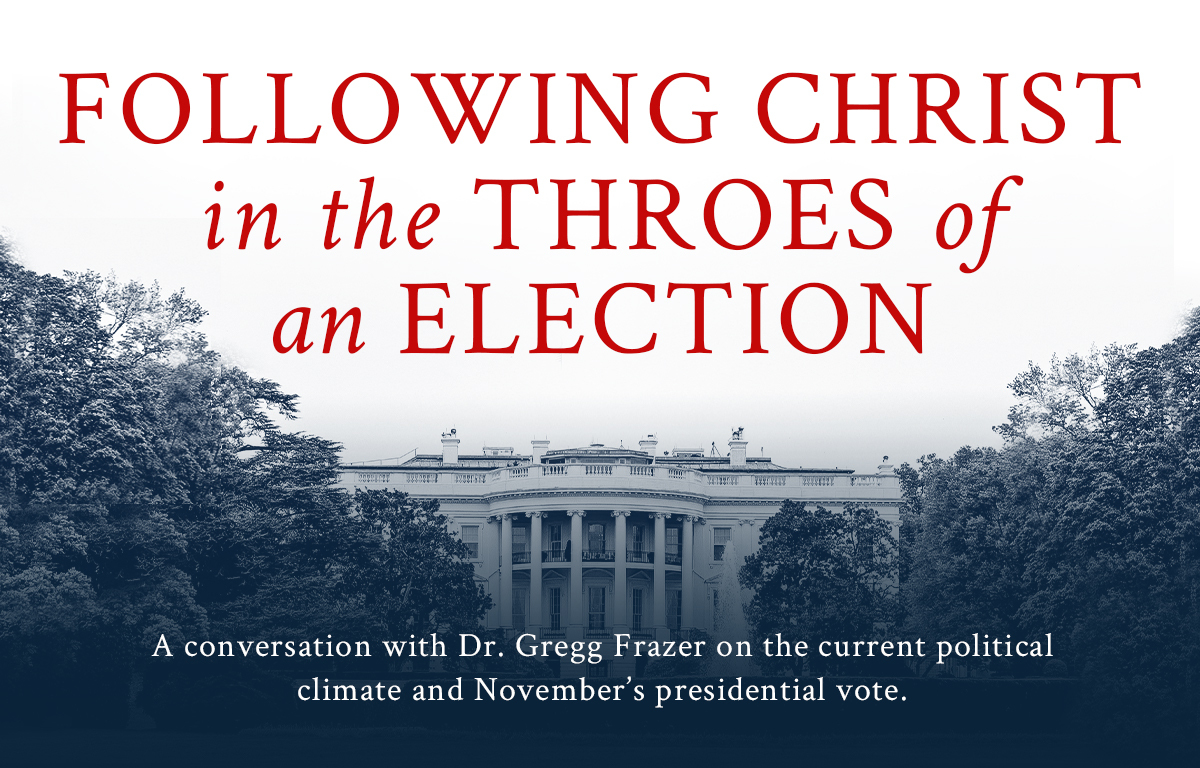 It’s a topic Dr. Gregg Frazer has addressed many times.

The longtime professor of history and political studies at The Master’s University has often spoken in churches about the intersection of Christianity and politics. Is voting a biblical mandate? How should Christians discuss politics with one another? How should they go about deciding which candidate to cast a ballot for?

All of Frazer’s answers are undergirded by another question, one that is no less relevant this year during an election cycle characterized by extreme rhetoric and an acutely polarized political climate ahead of November’s presidential vote.

“That’s the bottom line. Whether you’re in government or not, whether you follow politics or not, whether you vote or not, where’s your trust?” Frazer said during a recent interview with TMU President Dr. Sam Horn on an episode of “The Bit” podcast. “And for the believer, our trust is in God.

“… Whether Donald Trump gets reelected, or Joe Biden wins, that’s God’s plan. And it’s not an accident, and God isn’t surprised by it, like, ‘Oh, I didn’t see that coming.’ And so we need to order our lives politically in a biblical fashion with that fundamental understanding.”

That isn’t to say Frazer believes Christians should remain passive in the area of politics. He spends considerable time researching candidates before each election and advising friends, family and colleagues on who he thinks they should vote for — if they ask.

For his part, Frazer has voted in every election since 1976, both of the regular and off-year variety. He says he feels obligated to vote, but he stopped short of calling it a “sacred duty.”

“There’s nothing sacred about a vote,” says Frazer, who holds a doctorate in political science and government from Claremont Graduate University. “I know that sounds bad to some people. But a vote is a tool. It’s like a hammer. It’s a tool. There’s nothing sacred about it itself. It’s just something that is useful to achieve a purpose. And so I don’t view voting as a sort of sacred duty. I think it’s something I have a right to do.”

For some, Frazer says, voting may hinge on a single issue.

“If you want your vote to be driven by one issue because that issue far outstrips everything else in your view, then go for it,” he says. “… As it specifically relates to Christians, Christianity itself is driven by and focused on a single issue: What do you do with Jesus who is called Christ? So I don’t see how we can dismiss single-issue concerns if the issues involved are transcendent issues.”

Frazer also doesn’t dismiss the idea of voting for a third-party candidate or writing someone in.

If he feels an election lacks a worthy candidate, then Frazer fills in his ballot with the name of a non-politician (in fact, he’s nominated TMU professor Dr. John Stead for senator several times). However, Frazer doesn’t always see avoiding an election’s main contenders as a wise option. “If you agree with the policies of the one, you just don’t like the individual; and you disagree with the policies of the other, then I think you have misused your vote” if you choose a third-party candidate or write someone in, he says.

The focus, Frazer adds, should be on what a candidate will do, rather than on who he or she is as a person.

“You know, if we go back to American history, we didn’t know about Lyndon Johnson, John Kennedy, frankly, all these guys who had affairs with other women. We didn’t know about the language that Richard Nixon used behind closed doors or Lyndon Johnson, goodness,” Frazer says. “We didn’t know a lot of things about presidents because the press didn’t reveal those things. So we’ve rarely had a biblical, pristine president that we could really approve of. And so I think if Christians have that as a standard, then they just shouldn’t vote. There’s no point.”

Frazer also believes Christians should think critically about the political news they consume.

That’s one reason he teaches a class at Master’s on political communication. The class spends several weeks on propaganda, of which Frazer says there are seven kinds:

1) Name-calling: Giving something or someone a good or bad label.

3) Transfer: Placing something next to something else in order to try to apply the positive or negative connotations of one to the other.

4) Plain folks: Identifying with, or pandering to, the common people.

5) Bandwagon: Go with the crowd … “Everybody’s doing it.”

7) Card-stacking: Selecting only certain facts to present. Presenting only one side. Presenting opinion as fact, including flat-out lying.

As far as discussing politics with people at church, Frazer says best practice is to make your views known in a “winsome” way. And if people get upset, quit.

“It’s not worth it within the Christian community, with fellow believers,” Frazer says. “If we are to love by placing others ahead of self then just say, ‘Well, you know what, I don’t agree with you. Let’s talk about something else. Unless you want to listen to me try and persuade you and I’ll listen to you trying to persuade me.’ But if you’re just going to sit there and butt heads in the church, that’s just not right, in my opinion. As Paul says in 1 Corinthians, why not rather be wronged.”

One strategy, Frazer says, is to keep the conversation good-natured.

“If you can’t handle it that way, that gets back to my original statement. Where’s your trust?” Frazer says. “If you’re too heavily invested in today’s political issues or this candidate or that candidate or whatever, then you should back off, and you should read some scripture like Isaiah 14:24-27 and Jeremiah 29, and learn who’s really in charge.”