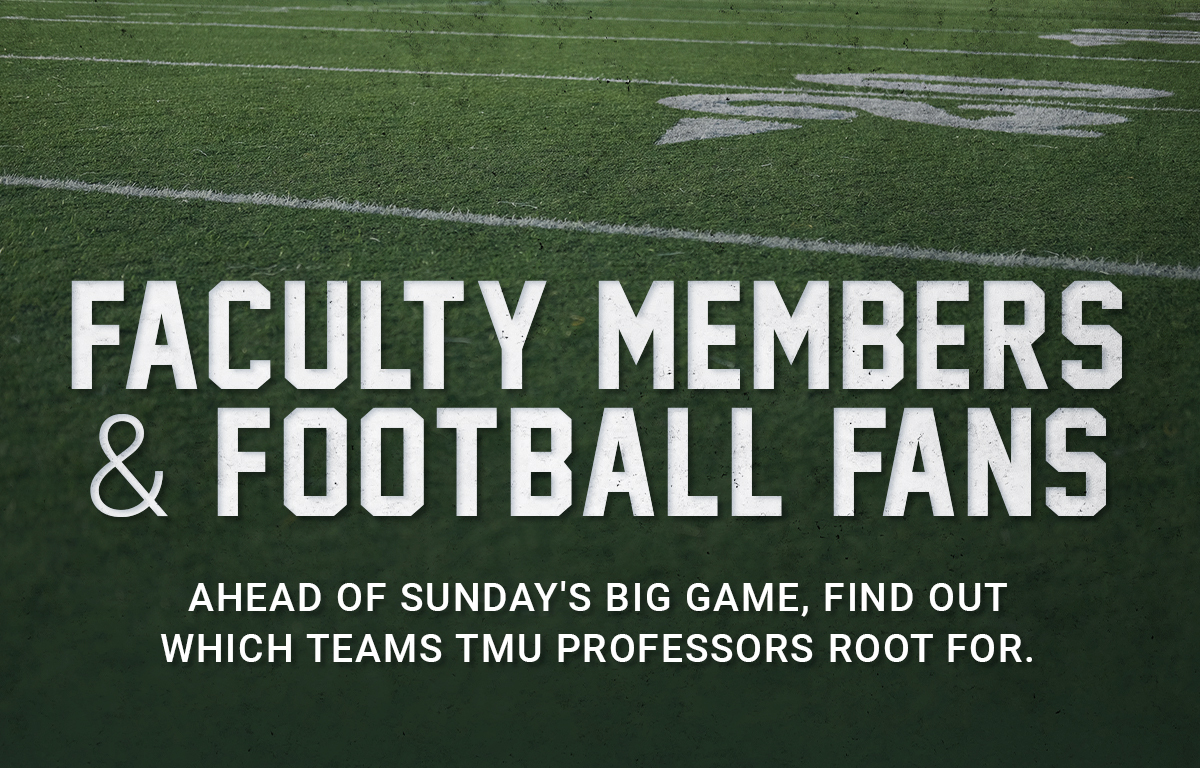 When it comes to professional football, allegiances vary across The Master’s University’s campus.

Dr. Shelbi Cullen, a professor of biblical studies and women’s ministries, is partial to the Los Angeles Rams.

Jeff Jensen, a history professor, grew up three hours outside of Detroit. But after so many losing seasons, his love for the hapless hometown Lions has grown cold.

Three of the biggest NFL fans among TMU’s faculty are Jason Beals, Jo Suzuki and Dr. Gregg Frazer. As millions prepare to watch the Super Bowl on Sunday, the stories of these three professors say a lot about the different paths people take to becoming fans of professional teams, the doors those affiliations can open for relationships, and the way in which Christians can ride the emotional highs and lows of a football season without damaging their testimony.

***
Suzuki joined TMU’s English department in 1998. He specializes in postmodernism and contemporary rhetorical, critical and cultural theories. And, he might just be the world’s most unlikely Dallas Cowboys fan.

Suzuki was born and raised in Karuizawa, Japan, where he knew relatively little about American football, and close to nothing about America’s Team.

That is, of course, until he moved to Ozark, Arkansas, to study at Citadel Bible College. There, Suzuki was surrounded by Cowboys fans, and he quickly fell in love with the team quarterbacked by Roger Staubach and, at the time, tabbed as an underdog.

However, by the time Suzuki moved to Texas years later to further his education at the University of Texas at Arlington, the Cowboys were on the verge of a dynasty.

In fact, during Suzuki’s 10 years in the greater Dallas area, the Cowboys won three Super Bowls and were the toast of the town. “The atmosphere of the city, it was just electrifying,” Suzuki says. “Everything revolved around the Cowboys.”

The years since have been less than glorious. Perennial contenders, the Cowboys have regularly fallen short of expectations, winning only four playoff games in the last 25 years.

“Every year you’re just waiting for them to finally win the championship,” Suzuki says. “But they never get there.” He says it’s agonizing to watch seasons like this last one, when the Cowboys finished 6-10 and missed the playoffs. But, he says there’s an emotional line a Christian shouldn’t cross.

“If you get depressed if your team loses and it’s prolonged, that’s not good,” he says. “Of course you’re sad, but if it controls your life, then you’re taking it too seriously.”

Anyone who knows Suzuki, knows there are few things in life he takes without a touch of humor.

“I tell my Monday classes that whether they’re going to get the easy quiz or the hard one, depends on how the Cowboys do,” he says, laughing.

Another one of Suzuki’s Monday traditions is to meet up with Frazer, a longtime history and political science professor, to discuss the past weekend’s football games.

Frazer was in no laughing mood two weeks ago when his beloved Green Bay Packers lost to the Tampa Bay Buccaneers in the NFC Championship game. But like his friend Suzuki, Frazer has learned to keep football in perspective.

“With the Packers, I love it, it’s tremendous, but it’s just a game,” Frazer says. “My life doesn’t revolve around it. I pretend that it does sometimes because it entertains people. It’s frustrating and disappointing, but there are things that are more important in life.”

Frazer began rooting for the Packers as a kid in Des Moines, Iowa. By the time his family moved to Kansas City, Missouri, he’d formed an unbreakable bond with the Wisconsin team, an attachment bolstered by the discovery of a distant cousin who played for the Packers under legendary coach Vince Lombardi.

When Frazer watches the Packers now, he sees each game through the lens of a coach. That isn’t by accident.

After he graduated from TMU (then Los Angeles Baptist College) in 1978, Frazer spent nearly three decades coaching high school football. For the final eight of those years, he was an offensive consultant at Oaks Christian in Westlake Village, California, where he helped the Lions win six sectional championships. That Frazer was eventually replaced says little about his coaching acumen. The new guy was Joe Montana (true story).

Since then, Frazer’s love for football – and the Packers – has not waned. For proof, look no further than the avalanche of team paraphernalia he owns, including a Packers-themed crockpot and toothbrush. He loves the Bart Starr jersey he wore on his lone trip to Green Bay’s Lambeau Field in 2010.

That, as it turns out, was also the season the Packers won their most recent Super Bowl. So, when either the Buccaneers or Kansas City Chiefs win Sunday’s big game, Frazer will know roughly what the team’s fans are feeling.

“It was glorious,” Frazer says of Green Bay winning the Super Bowl.

Beals, a TMU biblical studies professor, has seen his team win it all, too.

The South Jersey native — who came to California to study at The Master’s University and The Master’s Seminary — watched the Philadelphia Eagles win their first-ever Super Bowl in 2018.

“It was pretty joyful in the Beals household,” he says of watching the game with his wife, Stephanie, who’s also an Eagles fan. “When they won, friends from all stages of life texted me and called me to say, ‘Hey, I was rooting for the Eagles because of you.’”

Now a longtime Los Angeles transplant, Beals tries to see the Eagles whenever they come to town to play the Rams or the Chargers. Sometimes, he gets a little passionate.

“Fan is the very shorthand definition for fanatic, right?” Beals says. “So, you can easily tend toward that, the high of highs or the low of lows. I think the key is just reorienting your mindset, like with anything in life. When something good happens, you’re thankful for it and you put it in its proper perspective. And when something crushing happens, whether that’s your team losing or something else in life that happens, you put it in perspective and you remind yourself what you can be thankful for.”

In his time as a college pastor and now as a professor, Beals has also seen how following professional sports can build inroads for relationships.

“You don’t have to be a sports fan to be able to talk to people,” he says, “but I think it does help because the average American is invested in sports in some manner.”

Jensen, the history professor and football free agent, has had similar experiences.

“I think it’s a good way to connect with students,” he says. “It allows you to have an intro conversation with someone you don’t know. If you have a commonality around sports, you can break the ice. If somebody talks to me for five minutes about sports, they may feel like, ‘Oh, he’s not so scary.’”