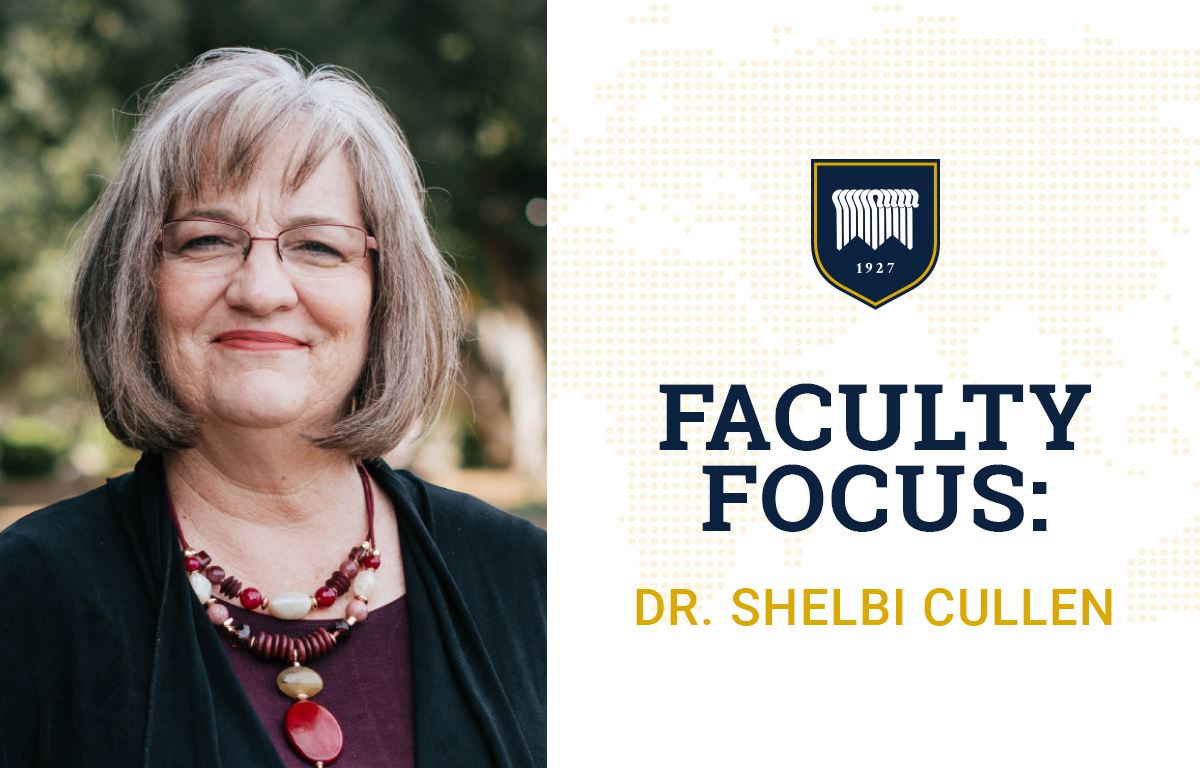 Dr. Shelbi Cullen grew up in Albuquerque, New Mexico, as the oldest daughter of a liberal family. The most she knew of religion was from her mom’s passing interest in Christian Science—a far cry from what she has now come to believe and teach as a Bible professor at Master’s.

In her younger years, Dr. Cullen was an eager student. But as she entered high school, things changed.

“I began to struggle with peer relationships. You know, high school is just hard. And unfortunately, because I was not a believer and was very weak—if I were to describe it as a biblical counselor, I would call it an immense fear of man—I got caught up in drugs and alcohol.”

Her grades suffered, and she only barely squeaked through with a diploma, graduating three months after the rest of her class.

Her goal after graduation was to become a travel agent and move out to California to work. A few years earlier she had met Sean, a guy who lived out in California, and there was mutual interest in pursuing a serious relationship.

After she finished her training and moved, they did just that. They eventually married and began having kids. When their oldest was five, they bought a house in Burbank and moved next door to a churchgoing family that also had young kids.

“Our kids all glommed on to each other and became fast, furious friends like little kids do. And then the wife befriended me and started evangelizing me from the get-go. At first, because I was a feminist, I was like, ‘Who is this woman? What is she trying to teach me?’ But then I realized, ‘Wow, I really like the way her marriage is. I really like the way she runs her family.’”

Dr. Cullen started going with her to moms’ groups at church. “Thankfully, the women who taught from the front really knew God’s Word.” Her time at these groups, and later her time on Sunday mornings as she started going to church with her friend, brought her into direct contact with the Gospel.

“I would say that February of ’93 is when the Lord really helped me to see very clearly that I was a sinner in need of a Savior. And they had taught me so well what the Gospel message was that, for me, it was easy to understand what I was going to put my faith in.”

About a year after Dr. Cullen’s own salvation was when the Lord chose to save her husband. He had started to come to church with her and the kids, and on Easter Sunday he answered the altar call.

This didn’t mark the end of all their problems, though. “We were still a young couple with three kids—a six year old, a five year old, and a newborn—trying to figure out how to undo all the terrible parenting that we had done and be a Christian family. It’s really hard when you’ve been married for a long time, and you’ve been so selfish in your marriage, to try and learn how to live an honoring life to the Lord. It took us a while; there were a lot of bumps.”

Even still, they began to grow in their service at home as well as their service to the church. Dr. Cullen began teaching in children’s ministry, while her husband started getting very involved with men’s ministry and their church’s missions committee.

In these early days, Dr. Cullen was struck by the desire to go back and complete her undergraduate studies. “I had a few credits, but I wanted to finish. And the person I was ministering with in children’s ministry was a Master’s College alumna, so she suggested Master’s.”

Dr. Cullen decided to finish her degree as a Christian Ministries major, squeezing a weekly night class into her schedule. She learned from people like Dr. Varner and Dr. Halstead, and she even went on a short study trip to Israel. While she was finishing, someone she knew in the MABC program asked if she would be a practice counselee.

“When she took me through the counseling process, I was like, ‘I love this! I want to do this!’” So, after she finished her undergraduate degree, she entered the program herself and got her MA in Biblical Counseling.

“As a student at Master’s, I saw that the professors were really living what they were teaching,” she remembers. At a time when she was still fairly new to the faith, learning from the faculty at Master’s gave her a deep and thorough grounding in solid doctrine.

Not too long after, when the Great Recession hit, Dr. Cullen went back to work to help support her family. Dr. Hild hired her for an administrative role in the Teacher Education Department—but because of her background in biblical counseling, she was later invited to teach as an adjunct on the side.

As she began to teach more classes, the department eventually sent Dr. Cullen back to school to get her doctorate in Educational Ministry from Southern Seminary. When she finished, she started taking on even more classes, until it became clear to the school that the best use of Dr. Cullen’s talents would be as full-time faculty. That transition happened in 2019, and she is now splitting her time equally between the undergraduate and graduate Bible programs.

“I’m really excited. I have great relationships with all my colleagues in the School of Biblical Studies and MABC, and I think they’re wonderful. And I’m thankful for the school—thankful for what I get to do. I get paid to disciple women at Master’s! I mean, I do teach classes, but I really look at it as another extension of discipleship.”

Having gone from student to staff to faculty at Master’s, Dr. Cullen has seen more sides of the school than most. This has only served to fuel her love for the people she works with. “I feel like the school is my family. I’m indebted to them for what I’ve learned and how they’ve taken such good care of me as an employee; they’ve really helped me to grow and develop.”

“That might be one of the advantages I have, is that I think like a student as I’m preparing for classes, because I was a student here.”

Whether it’s at Master’s, at Grace Community Church where she and her husband now serve, or on a mission trip, Dr. Cullen has it in her heart to take every opportunity for discipling that the Lord gives her. We are grateful that our students get to be the recipient of this service.