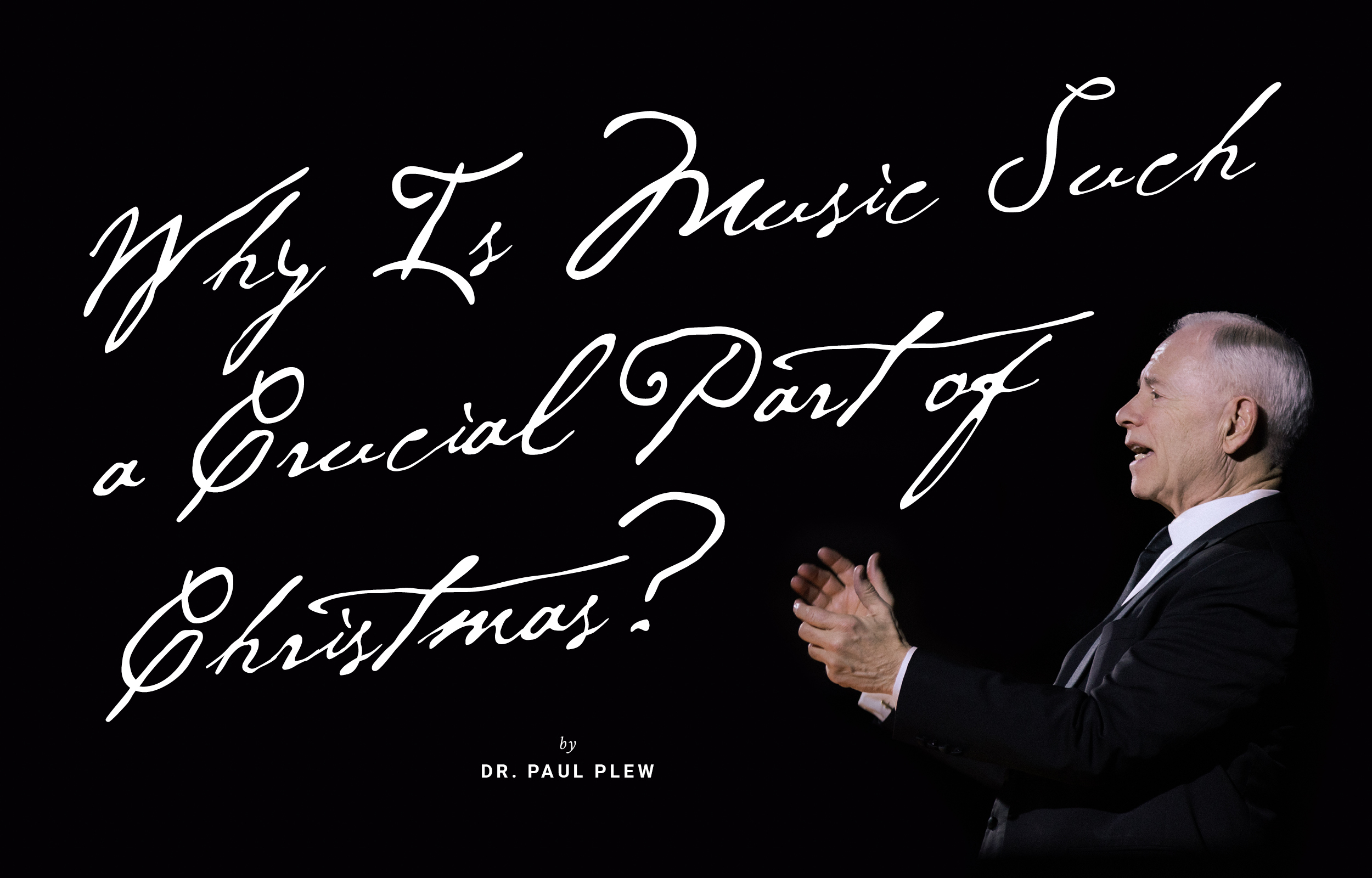 Editor’s Note: This is the cover story of this month’s Mustang Connection magazine.

It all started on the Judean hillside in Luke 2. The angel of the Lord said, “I proclaim to you good news of great joy that will be for all the people.” Suddenly, there was a multitude of angels proclaiming, “Glory to God in the highest, and on earth peace to men with whom He is pleased.”

That was the first Christmas proclamation. The sky was filled with thousands and thousands of angels making sounds that I believe went far beyond the beauty of what we call music. Since then, there have been many more occasions of celebrating Christmas through the making of joyful noises. There are many Christmas carols that date back hundreds of years. Let me list a few:

“Of the Father’s Love Begotten” dates back to Aurelius Clemens Prudentius in the fourth century. He wrote for his own personal devotional use.
“O Come, O Come, Emmanuel” was written in the seventh century in Latin. It was translated by John Mason Neale into English in 1851. Many hymns that we sing today come from Neale’s translations from Latin.
One of my favorites of those translated from Latin is “O Come, All Ye Faithful.”
“Lo, How a Rose E’er Blooming” dates to the 15th century, and the carol, “From Heaven Above” was written by Martin Luther in the same time period.

Many were written in the 17th and 18th centuries. They were often written by gifted poets and pastors and were combined with the music of major composers of the day. That is why we still sing them, because the poems are attached to great music.

“Joy to the World” was written by Isaac Watts and set to music by George Frederick Handel.

“Hark! The Herald Angels Sing” was written by Charles Wesley and set to music by Felix Mendelssohn.

There are other carols that have great stories behind them. “Silent Night! Holy Night!” was written for a Christmas Eve service in 1818 in Oberndorf, Austria, by a pastor, Joseph Mohr, and church organist, Franz Gruber. It was first sung with the accompaniment of a single guitar because the organ was broken.

Of course, there are carols still being written today. A couple I will mention are “Joy Has Dawned Upon the World” by Keith Getty and Stuart Townend, and “Exult in the Savior’s Birth” by Matt Boswell and D.A. Carson.

So why through the centuries, and all the way down to today, has there existed such a strong connection between music and Christmas? Down through the centuries, music has always been a central part of Christmas; that’s certainly been true at Master’s since the school’s founding in 1927.

For one thing, everyone loves Christmas. We love the music associated with it, both sacred and secular. Music reminds us of family gatherings. Often we think of family members who are not with us anymore. We think of our children when they were small. We think of the times around the Christmas tree singing carols and reading the Christmas story.

Hearing music again reminds us of where we were and who we were with when we sang or heard a particular carol on previous occasions. I remember being at the First Baptist Church in Marathon, New York, as a young child, with a foot of snow outside, seeing my father leading the congregation in singing Christmas carols. I can see it now … the stained glass windows, everyone singing loudly, and my sister at the piano. It is like it happened yesterday.

I also remember playing the piano for the church choir in Marathon in the musical “Love Transcending” by John Peterson. Yes, my father was leading. Memories.

As you are reading this, think about past Christmas memories that you have had. Often music will awaken those thoughts of precious moments with precious people at a precious time of year.

At what other time of year do you see people gather together and go singing house to house? They also go to retirement centers, hospitals and community centers to sing and encourage people. Music brings them together. I loved getting family, friends and alumni of The Master’s University together to go out and sing carols. We would often have more than 25 people. We would go to such places as the home of Dr. John Dunkin, a former president of TMU (it was actually Los Angeles Baptist College then). We sang for Mrs. Hotchkiss, the wife of the man for whom Hotchkiss Hall is named, and we sang for shut-ins who loved every minute of it. We loved it, too. Music brought us together, and the music was tied to strong biblical texts that spoke of the most important event in history … the birth of our Savior.

Folks, people all around the world sing the gospel at Christmas. It is because of music that it is allowed. Some of the lyrics that leave the mouths of both the saved and unsaved include: TMU’s Come Christmas Sing! Concerts started nearly four decades ago. This one was in 2011.

Christmas is a wonderful time to share our faith. Do it this year. Do you have someone in mind? Pray. Also, this is the time of year to think of mending fences. Is there someone you should reconnect with and say two of the hardest sentences in the English language — “I am sorry” and “I forgive you”?

Also, there are people who seldom go to concerts but often go at Christmas. That is why we started our Come Christmas Sing! Concerts series 37 years ago. We feature all of the musical groups on campus, including the University Orchestra, University Singers, Master’s Chorale, handbells, ensembles and soloists. We also join with the audience in singing “The 12 Days of Christmas” and our annual Christmas Carol Sing. We also sing a major oratorio with orchestra, which allows our students to sing and play great art from the heart. We do this because we want everyone to experience the wonder of music at Christmas and the strong gospel message it shares.

So why is music such an important part of Christmas? You could say, Christmas started with a song; it shares the greatest news ever told; it brings family, friends and community together; it brings back memories of loved ones, precious experiences and opportunities; it connects us to the past, which is often forgotten; and music also helps us think of the future. Since He came the first time, He will come again.

1 Thessalonians 4:16-17 reads, “For the Lord Himself will descend from heaven … and the dead in Christ will rise first. Then we who are alive and remain will be caught up together with them … and so we shall always be with the Lord” (LSB).

Let’s sing the Hallelujah Chorus. … He shall reign forever and ever King of kings and Lord of lords.

You can learn more about TMU’s School of Music, here.