Credentialing During COVID: An Interview with Our 2020 Teaching Credential 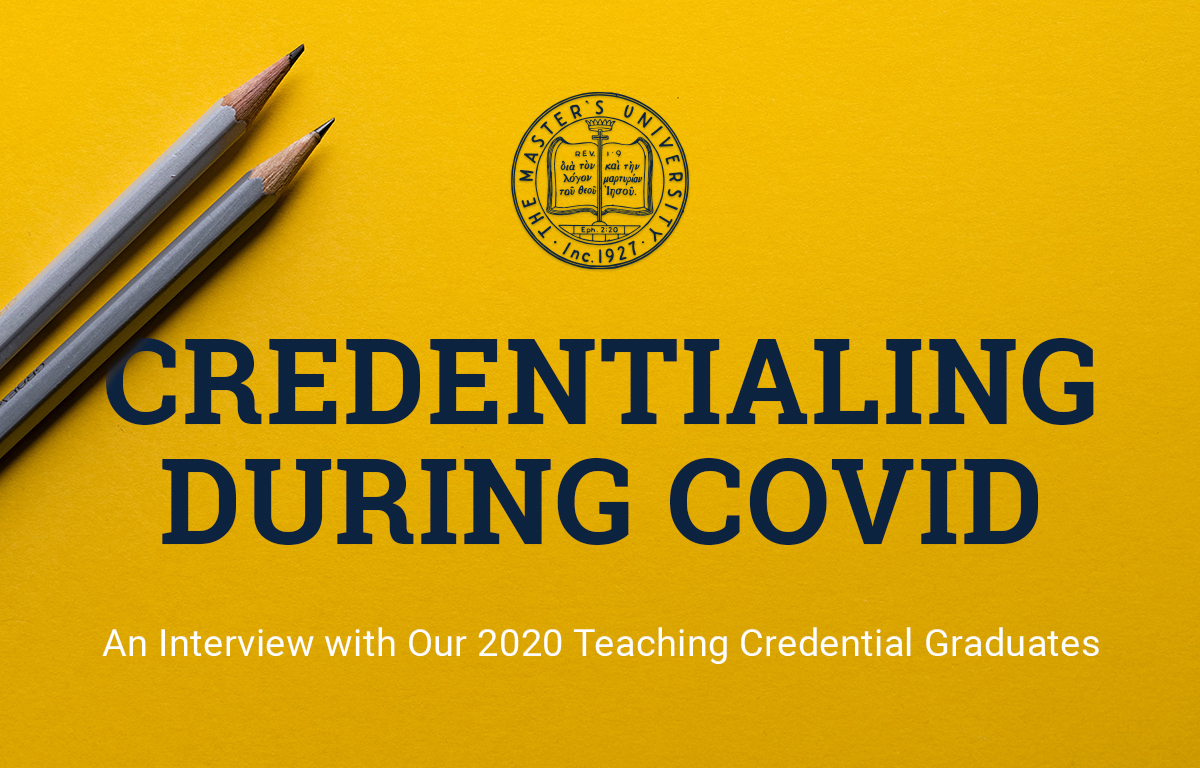 The Teaching Credential program at The Master’s University is always intense. Classroom observation, student teaching and graduate-level coursework are all core aspects of the students’ education. This year, though, brought unique challenges. Samantha Del Rio and Susana Nestor, the program’s 2019-2020 Student Teachers of the Year, were among those who had to navigate the sudden shift to distance learning because of COVID-19.

“It all happened so quickly,” Nestor says.

For Nestor, a career in teaching had been a longtime goal. “I think God has definitely put that on my heart ever since second grade, and it’s never changed. I graduated high school and I still thought, ‘I want to be a teacher.’” After graduating from TMU with a bachelor’s degree in liberal studies in 2018, Nestor chose to pursue a multiple-subject teaching credential at Master’s, a program tailored toward elementary education.

At the time of the shutdown in March, she was in between student-teaching assignments and was preparing to work with classes of young children, where core skills like reading are the priority. For young kids with short attention spans, online education can be particularly challenging.

However, Nestor was prepared to go online. One of the classes she’d taken in TMU’s Teaching Credential program was on the use of technology in the classroom. Through learning about digital platforms like Padlet and Flipgrid, she had been exposed to the possibilities afforded by modern technology. This foundation turned out to be a boon.

When school resumed in its new online format, the teacher Nestor was working with tasked her with teaching math to kindergarteners over video.

“Planning with kindergarteners in mind, I knew that I had to make it very simple and very clear,” she says. “Kindergarteners can’t sit for a very long time, so I really tried my best to make each video no more than six minutes.”

Nestor also worked hard to make each lesson engaging, something the children responded positively to. What’s more, the teacher she was working with benefited from Nestor’s knowledge of technology.

“Because we’re the newer generation of teachers, we kind of grew up with technology – we had phones and laptops – so we know how to edit videos, for instance,” Nestor says. “So, it was definitely a huge advantage for our teachers to have us with them, because we were helping them figure out what they could do.”

The situation remained far from ideal. Nestor’s passion for teaching stems from her desire to know and help students as individuals, which is difficult to do in an online setting. Still, she sees the benefits that came from unprecedented circumstances.

“I don’t think technology is going away,” she says, “so it was really beneficial for us to put our skills into practice and figure out how we can use this in our future classrooms to be effective teachers.”

After earning a bachelor’s degree in English from Master’s in 2018, she chose the single-subject credential program and was training to be a high school English teacher. In fact, in the middle of her credentialing process, Del Rio was hired at Valencia High School, a seven-mile drive from TMU’s campus.

Her first day at Valencia was February 20. She had only been teaching in her new classroom for about three weeks when news of the school closure dropped.

“March 13, during lunchtime, there was a mass email saying they were going to shut down all of the schools,” Del Rio says. “So, for another nine or 10 weeks, we did remote learning.”

Del Rio remembers being overwhelmed by all the platforms available to her as she began online instruction. In the end, she decided to keep things simple, using Google Classroom and Padlet for assignments and Zoom for teaching.

“I thought it worked out for me,” she says. “I was trying to keep it simple for them, because I knew they used a lot of other websites in other classes, you know? And I think I learned a lot from having to use technology that I wouldn’t have used normally.”

In lieu of in-class papers and discussions, Del Rio had her students write online posts or record videos of themselves talking. And in order to keep the teenagers on track, Del Rio used an application called Remind to send messages to students and their parents.

“I actually found that it was easier for students to remember their homework that way, at least in my class’s case, because it was on their phone,” Del Rio says. “That’s where they’re at. They’re checking their phones. They’re not checking their planners.”

Del Rio’s students responded so positively to online assignments that she thinks she may continue to use them for assessments in the future.

“That’s more engaging for them, because they’re young, and they’re native to this technology,” she says. “They’d rather write a blog post about what they did than come on Monday and write a page about it. I think the technology meets them where they’re at, and it could be easier on me. So, I think I’ll pepper it in where I think it helps them most. That’s my goal.”

Still, online education was far from Del Rio’s first choice. She didn’t expect to spend most of her first semester as a full-fledged teacher doing her English lessons over Zoom. But, she believes that the nine weeks of online education were profitable, both for her students and herself.

This year, she’s implementing what she learned as she continues teaching online for Valencia High, and she is also excited to pursue TMU’s Master of Education in Teaching.

Nestor, meanwhile, has been hired as a long-term substitute teacher in the Saugus Union School District, a promising step toward a full-time elementary position in the Santa Clarita Valley.

Despite taking different paths, both Nestor and Del Rio say they are intensely grateful for the preparation and support they received throughout TMU’s credential program, especially from Dr. Jordan Morton, Professor Cindy Hallman and Professor Matthew Brown.

“We really couldn’t have done it without their support and their knowledge,” Nestor says. “I’m so appreciative of them.”

For more information on the Teaching Credential program, click here.