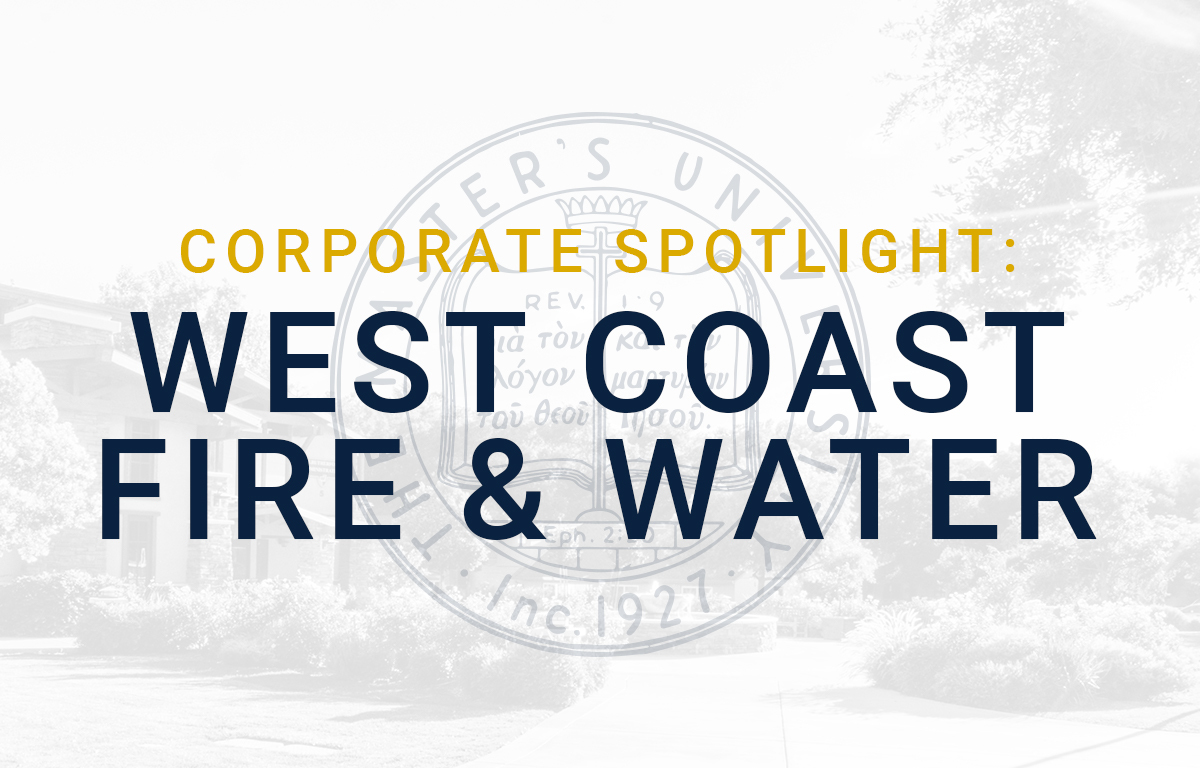 Once a month, the Bridges family gathers to set in motion the heartbeat of its business portfolio.

The meeting’s agenda begins with prayer, a request for God’s wisdom in dispensing a portion of the profits from West Coast Fire & Water, Bridges Construction, and Overflow Coffee.

Some of the funds are tabbed for people and organizations the family has vowed to regularly support: a Christian school, a Haitian orphanage, an alumnus of The Master’s University committed to missionary work in Croatia.

From there, family members champion new ministry opportunities. Possibilities for generosity abound, but the criteria is simple: Who or what is advancing God’s kingdom?

Soon enough, the Bridges clan ends the evening with a recap and another round of prayer. Then they return to the work that will fuel their mission.

From the beginning, Doug and Krishelle established giving as a staple of their marriage — even in leaner times as Doug began his career as a building contractor and the couple started a family.

In recent years, they brought their children into the decision-making process after Doug read a book by David Green, the founder of Hobby Lobby, who included his kids in the pursuit of living generously. It’s a way of life Doug and Co. aim to embrace. “We really see our businesses as an opportunity to be a blessing to the kingdom of God,” he says.

That’s not to say there was always much to give. In 2008, the housing bubble burst, and the demand for construction plummeted with it.
Doug searched for answers.
“It was like, ‘Lord, we have a lot of bills to pay and kids getting ready to go to college, and the construction income is at zero,’” Doug recalls.
The answer came by way of a cold call, the kind Doug might have found tedious had he not been intrigued by the prospect of buying a fire and water cleanup and restoration franchise. He did his homework and concluded that the industry was relatively recession proof.

The learning curve was steep. Doug knew next to nothing in the beginning (“It felt like you were drinking from a fire hose,” he says), but his intricate knowledge of housing construction gave him a leg up in learning how to dry homes out after a flood.

At first, he hoped the restoration franchise would supplement Bridges Construction. Instead, over the next 10 years it ballooned into the centerpiece of the family’s holdings. It grew from a two-man operation to a company with 70 employees, eventually outgrowing the geographical boundaries placed on it by its franchisor.

In 2019, the Bridges family walked away from the nationwide brand it bought into a decade ago and opened West Coast Fire & Water, an independent company they hope will develop a geographic footprint equal to its name.

West Coast aims to support customers in their lowest moments. “Their house flooded or burned. It’s a difficult time for them,” Doug says.

The business offers fire- and water-damage restoration services, mold remediation, biohazard cleanup and storm damage repair. In 2020, the company added COVID-19 decontamination to its repertoire, with a 24-hour hotline.

The primary focus is commercial projects — mostly schools and municipalities. West Coast has cleaned more than 150 schools in the last three years alone.
Doug is quick to sidestep any credit for the business’s success. As challenges arose — like hiring employees with integrity and earning the trust of insurance companies — he prayed for wisdom and found that God blessed him in that area beyond what “my knowledge deserves.”

“I went to college. I did OK in high school,” Doug says, “but I make decisions and I’m like, ‘How did I end up making that decision?’”

The goal of it all is to power the family’s mission of supporting God’s work, a desire long engrained in Doug.

Growing up, his parents consistently hosted missionaries in their home, and as young as 10, Doug would save money to support those men and women. “I guess the Lord just put that in my heart,” he says.

Wanting a similar experience for his own children, Doug started a “giving team.” The group, which meets in the middle of every month, consists of Doug and Krishelle and their two oldest children, Jonathan and Kristyn — along with Jonathan’s wife, Danielle, and Kristyn’s husband, Erik.

After a slow month, the gathering might last 15 minutes, with little left to discuss after regular commitments of support are met. Other times, “We go, ‘Wow, we haven’t even used a tenth of it. OK, where are we going to put this money?’” says Jonathan, who’s primary role is as general manager of Bridges Construction.

The percentage of profits donated has grown over the years, but the number remains steady month-to-month.

The family supports missionaries, pro-life organizations and a local Christian school. They have provided funding for an organization in Africa that works to stop child slavery and a Haitian orphanage run by Krishelle’s father.

The family also sponsors The Master’s University, where Doug and Krishelle have sent all four of their children, most recently Kimberlyn, a 2019 graduate, and Joshua, who currently attends TMU with his wife, Kimberly.

TMU fits the giving team’s criteria because of the school’s commitment to preparing young people to impact the world for Christ and Scripture. Jonathan, a 2013 graduate, knows firsthand.

“If my life was a graph of my relationship with the Lord,” he says, “I was consistently, slowly growing all the way up to high school. The graph would look like a recession in high school, but the Roaring Twenties in college. You have to literally work not to grow spiritually at Master’s because everyone around you is growing.”

That’s why Jonathan, who serves in his church’s youth group, continues to encourage students to attend TMU. “I tell them, ‘I don’t get anything for you going to Master’s,’” he says, “‘but you’re going to grow spiritually there. It’s like being a plant in a greenhouse — with water, sun, soil and fertilizer. You can’t do anything but grow.’”

That’s not the only connection Jonathan hopes to maintain with his alma mater. The Bridges family would love to see Master’s graduates and students working for West Coast, if and when it opens a Los Angeles-area branch.

“I can’t think of a better way to have it than to have high-integrity people as the main core of our startup down there,” Doug says.

It wouldn’t be the first time Doug and Krishelle have branched out. They recently opened Overflow Coffee, a drive-thru kiosk in Kelseyville, Calif., and plan to give away 100 percent of the company’s profits.

On one afternoon last fall, Doug sat in his office at one of West Coast’s four locations, looking across the parking lot to his newest endeavor, cars queuing in anticipation of lattes and mochas. “People pay crazy amounts for coffee,” he says. And soon the giving team will meet to disperse those amounts around the world.