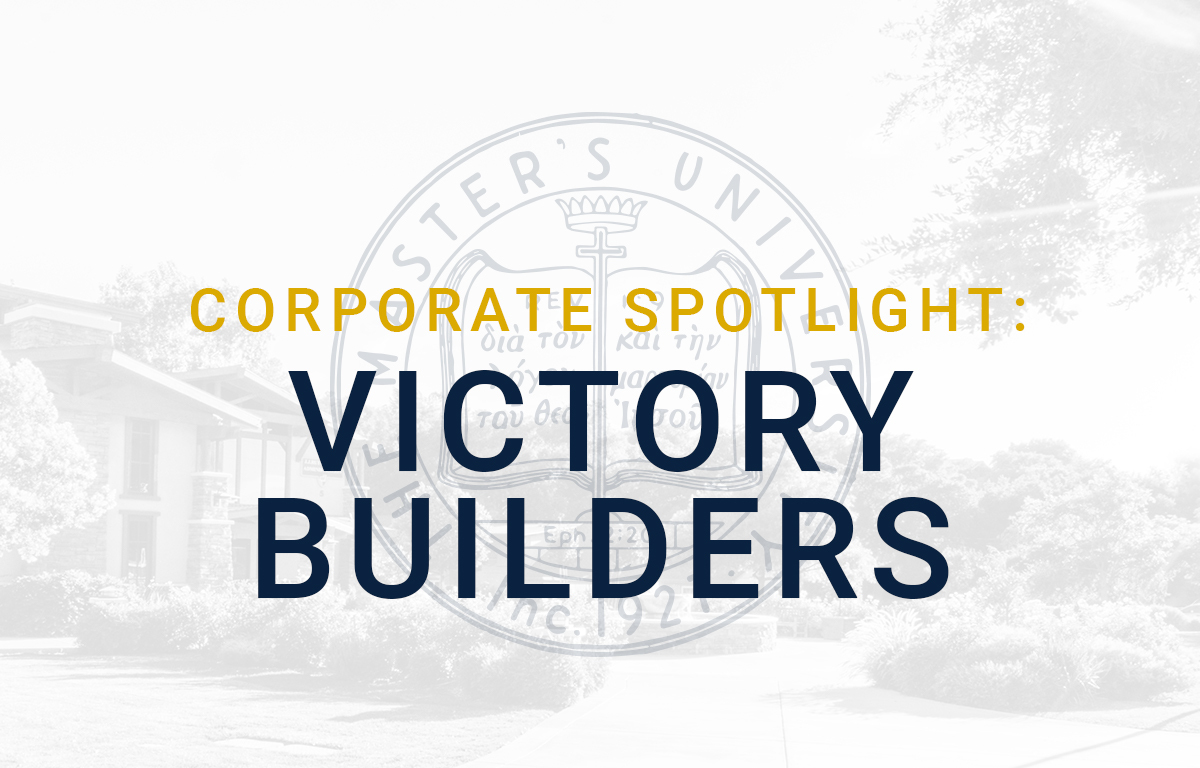 At first, Bryan Biggers and Justin Klopfenstein tossed the idea around mostly as a joke.

Back in the early 2000s, the men worked for a drive-thru coffee company in Southern California. Biggers was a general manager. Klopfenstein, a graduate of The Master’s University, oversaw construction and maintenance.

They discussed going into business together, but the plan was less than serious. At the time, they lacked the necessary resources and experience.

What they did have was a solid friendship, complementary skill sets and a shared commitment to honor Christ in their work. And more than a decade later, as the men reflect on their journey to founding Victory Builders and establishing it as one of the leading construction companies in northern Los Angeles County, those elements remain crucial to why they work so well together.

“I’m just grateful to have a partner who is committed to acting with integrity,” says Biggers, adding that he and Klopfenstein have never believed God was obligated to grow their business if they obeyed Him.

“God doesn’t owe us anything,” he says.

But so far God has chosen to expand the company’s footprint in the Santa Clarita Valley and surrounding areas. When it opened in 2014, the two-man operation primarily stuck to kitchen and bathroom remodels. Now Victory does commercial, residential and homeowners association projects, focusing mainly on commercial construction, like major remodels to dorms at The Master’s University in 2020.

As it happens, it wasn’t far from TMU that Biggers and Klopfenstein met — in the college group at Grace Baptist Church in Santa Clarita around the turn of the millennium. Biggers was studying business at Cal State Northridge, while Klopfenstein was a biblical studies major at TMU.

Their friendship matured over the years as they joined an adult Bible study at Grace Baptist with their wives and after both men accepted jobs at Coffee Kiosk. It was at the coffee company’s headquarters where they began discussing the future.

It made sense to go into business together.

Klopfenstein grew up on a ranch in Tehachapi, California. He enjoyed building things in his family’s workshop, and he tagged along on jobs with his father, a plumber, during the summer. Klopfenstein registered for every one of his high school’s shop classes.

As a student at TMU, Klopfenstein worked part-time as a handyman, and he spent five years after graduation serving as a project manager for a construction company, gaining experience and knowledge that continue to influence his work at Victory Builders.

As for Biggers, he brings the business acumen. After graduating from CSUN with a degree in business administration, he has worked in development for Children’s Hunger Fund, in e-commerce for Mirabella Beauty Products and as a project manager for L.A. Turbine, a gas and oil company.

In every job, Biggers’ focus was the same: excellent customer service. “The gold standard, if possible, is to make the clients happy and to provide value,” he says.

That was a central focus of Victory Builders when it opened in 2014. In the early days, Klopfenstein and Biggers toiled on nights and weekends, sometimes losing money on projects, to make sure the job was done right.

“When we were done, we’d ask our customers candidly, ‘Are you satisfied? Are we done?’ We don’t assume that,” Biggers says. “That’s still how it goes today. We’re not going to leave until a client is satisfied.”

A more foundational goal for Victory Builders is to do all of its work to the glory of God, a process that often begins by asking a simple question: What would be the right thing to do?

“I’ve met Christians in business that struck me as a little more business than Christian. And that’s just not us,” Biggers says. “If it’s either clearly right, or we’re convicted that it’s right, we want to do it. We’re going to be honest, we’re going to do it with integrity, and the Lord will bless it if He wants, or He’ll take it away.”

One way Victory Builders seeks to honor the Lord is in the area of transparency. The construction industry can be opaque — customers don’t always know what they’re paying for — so it can be easy for companies to take advantage. Biggers and Klopfenstein want to be different.

“We communicate as much as possible so our customers know where their dollars are going,” Klopfenstein says. “Sometimes when a contractor bids on a job, you’ll get a bunch of fluff just to cover themselves because they might be missing something. We try to show our customers all of the costs involved in our proposal so they know what they’re paying for.”

That was TMU’s experience with Victory.

“It’s a luxury to find contractors you can trust,” says Ryan Zamroz, TMU’s director of development, “but when you find a company like Victory Builders, whose owners are like-minded in their love for the Lord, it becomes a true partnership in the work the Lord is doing at TMU. It was a pleasure working with them, and it’s always fun to see Master’s alumni using their businesses to glorify God in their industry.”

Another distinctive of Victory Builders is in how it handles conflict.

“Even if it was a difficult client who was trying to make us fix something that we thought wasn’t our fault, we still try to be a peacemaker and bridge a gap there before we leave a project,” Klopfenstein says. “Obviously, you can’t always make everybody fully happy, but we try to show that we have humility and integrity. People know that we’re Christians so we want to make sure we act that way in how we run our business and the way we treat our employees.”

Really, Biggers and Klopfenstein see Victory Builders as an opportunity for ministry. They’ve been encouraged to see more than one employee come to faith in Christ while working there. And they say that as the company grows, they would like to increase their financial support for church and missionary groups. “That’s something we’re really thrilled about,” Biggers says.

But even with a like-minded business partner, Klopfenstein and Biggers know that if they want to succeed in running Victory Builders God’s way, it will take more than their own efforts.

“I do a lot of driving between projects,” Klopfenstein says, “and I find myself throwing up a simple prayer for one of the employees I’m thinking about or a conflict with a customer that I’m trying to work out and do it with integrity. I’ll just pray about it and seek the Lord’s guidance.”
————————————————–
To learn more about Victory Builders, visit [victorybuilt.com](https://victorybuilt.com/).