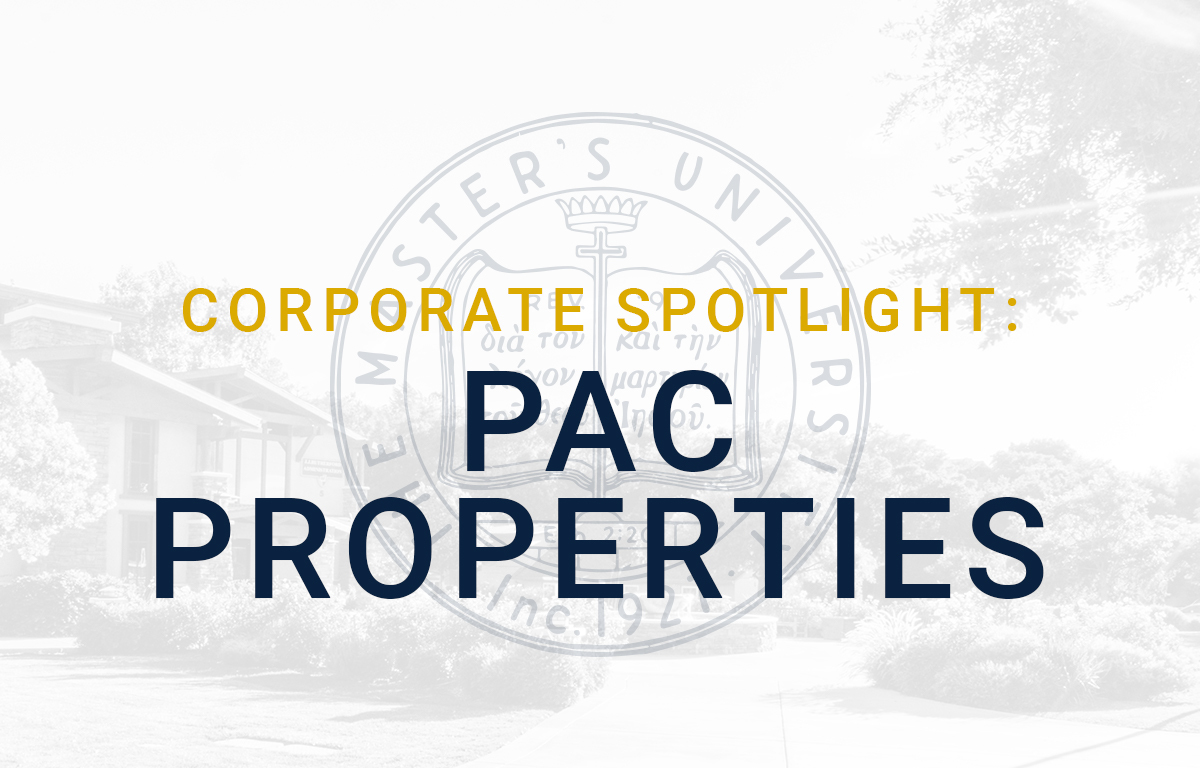 Almost as far back as The Master’s University alumnus can remember, he was fixing broken-down bicycles in order to sell them, or hawking flowers from his mother’s garden.

“It was always part of my DNA,” he says.

Coeler is now the owner of PAC Properties, a company that manages an extensive portfolio of apartment units across Southern California. But while he was always an entrepreneur at heart, it wasn’t until coming to Master’s as a student that he discovered a purpose in business beyond the simple pursuit of what he loved to do.

“Everything stems from the foundation that I got from The Master’s University during a very vulnerable time in my life,” he says. “Without that foundation, everything would look completely different.”

Coeler credits his mother, Heidi, for sparking his interest in real estate.

“When I was 16, she walked me through the importance of saving and investing, which included the process of purchasing a rental house — so I had those goals early on,” he says.

By the time he enrolled at College of the Canyons, a community college in the Santa Clarita Valley, Coeler had already bought his first rental property. A few years later, in 1985, he was recruited to play basketball at nearby Master’s.

Having attended a Christian high school, the jump to Master’s seemed natural. But it was while studying business administration here — sitting in classes with faculty who were passionate about the Lord, making friends with peers who were serious about their faith, and hearing the truth taught clearly every week in chapel — that Coeler was finally confronted by the state of his own soul.

“All of those things were instruments that led to my salvation,” he says. “I don’t believe I was saved prior to going to Master’s.”

After that, the influence of professors like Dr. John Stead and Dr. Benjamin Powell began to shape him into someone who was not primarily an entrepreneur, but a servant. It was this perspective that Coeler brought into what would become PAC Properties, a company with stated core values of “service and community.”

Coeler said his goal was always to own real estate, and the property management aspect of the business was a byproduct of that.

“We tried to have other property management companies manage the apartment buildings, but they just weren’t cutting it,” he says. “I decided to train my own people based on the knowledge I had acquired through working in the industry, and I set out with the goal to serve our residents the best we could.”

Growing up, Matt watched his dad stay connected at TMU and experienced firsthand the kind of community Master’s worked to foster. He wanted to be a part of it.

“There was no question in my mind about where I’d be attending,” Matt says.

Like his dad, Matt was a business major, and he too found the relationships he built at TMU to be formative. One faculty member who had a significant impact on him was Dwight Ham, an associate professor of business administration and someone with experience in high-ranking executive roles during more than 35 years in business.

“He preached at many of our chapels while I was attending the university and supported us by attending our basketball games,” says Coeler, a 6-foot-4 forward who played two seasons with the Mustangs. Coeler’s career scoring average (18.5 points per game) is the eighth highest mark in program history, just 1.2 points behind future Laker Mike Penberthy. “It is amazing to see Dr. MacArthur’s faithfulness in preaching the truth and living out his faith over the years, and to this day he is still my mentor and friend. I don’t know where I would be without Grace Community Church and TMU.”

For the Coelers, PAC Properties is an opportunity to live out genuine, compelling faith in a sphere that can be consumed by anxiety and self-interest. Owning and managing apartment buildings can be a particularly stressful endeavor in California, maybe never more so than during the coronavirus pandemic.

“It’s easy to start complaining and playing the victim, but that’s not biblical,” Coeler says. “That’s when Christ can shine the most — under difficulties.” Instead of complaining, or responding with fear and anger to obstacles, the Coelers aim to model prayerful trust in the Lord to their team and residents.

But reacting to crises isn’t the only avenue they’ve had for building relationships and displaying Christlikeness at work. The Coelers have also initiated “PAC Cares,” a program aimed at aiding and connecting with the community.

As part of the outreach effort, the company allocates a portion of its revenue toward feeding families in need and organizes staff-wide volunteer days. This year PAC employees packed boxes of food at Children’s Hunger Fund in Sylmar, Calif.

Sometimes the Coelers’ gestures look like hosting a yearly Christmas party, where staff and their families go bowling. Other times, it’s as simple as going out of their way to encourage a resident or team member. Through it all, though, the goal remains to live a life consistent with the Bible.

That’s one reason the Coelers have prioritized remaining connected to TMU.

Says Matt, “We know how much of an impact it had on us, and we want to continue to see the impact TMU has on future generations, because it’s so rare to find an institution that’s dedicated to preserving the truth and unwilling to compromise its beliefs.”

Matt says he would encourage current students to cherish the relationships they build here. He added that it’s important for alumni to remember the impact the school had on them and to stay plugged-in however they can.

“When I think about all the people who had an influence on my life during my time at TMU, including alumni, it makes me want to contribute in the same way they did,” Matt says. “I want to pour into people as I continue to grow and encourage them in their walk with the Lord. TMU is a community, and it’s one that you never really leave, even after you graduate.”

To learn more about PAC Properties, visit its website: pacapartments.com.