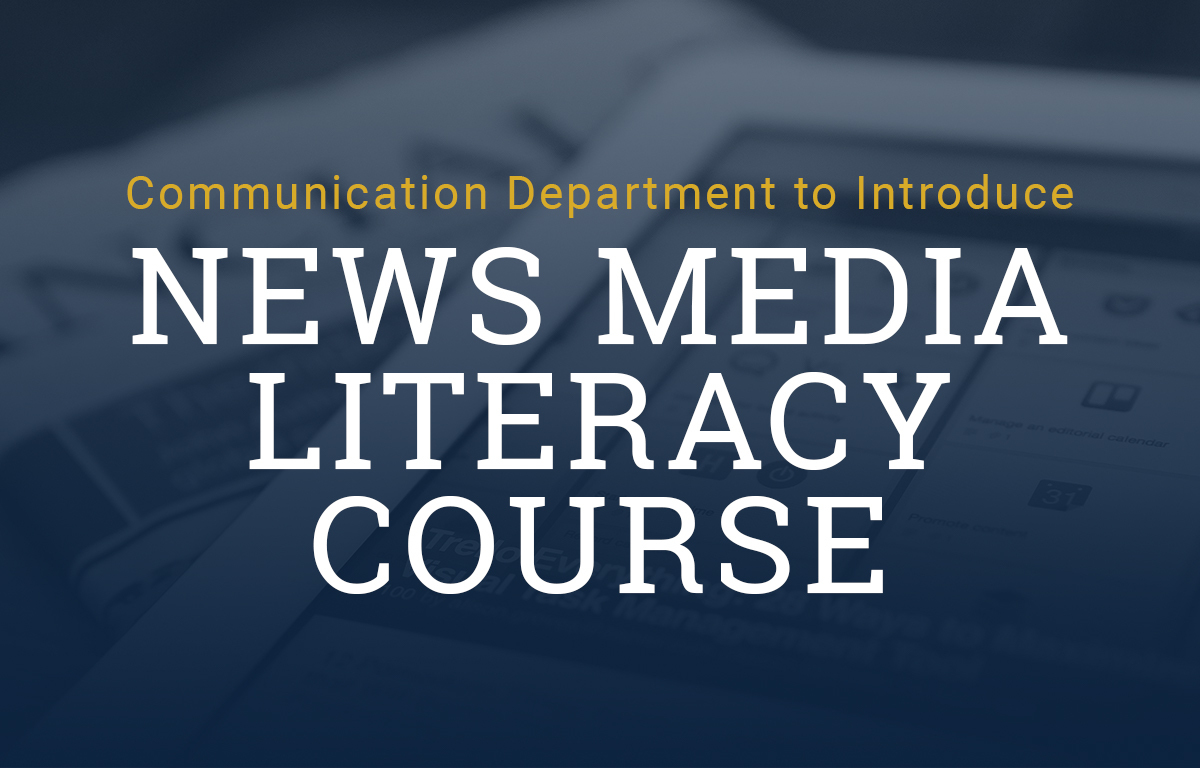 Over the past decade, “fake news” has become a household phrase.

As social media has become ubiquitous, more people are getting most of their news from Twitter and Facebook rather than traditional sources, and more people are sharing this news with their own social media followers — often without checking its veracity. And though many people are able to spot “fake news” when they see it, fewer understand where it comes from or how to articulate what makes some news “fake.”

The idea for this course began in 2017 while Dickson was in his doctoral program at the University of Southern California. “The program involved solving what they called a ‘problem of practice’ in our area of influence at work,” he says.

As a professor of communication, Dickson was tasked with identifying a problem related to teaching journalism and other media-related classes. As he did his initial research, he found himself thinking about the current crisis in journalism and how it was causing this problem of “fake news.”

“Thirty years ago, it was a 24-hour news cycle,” says Dickson, formerly an award-winning sports writer for The Santa Clarita Valley Signal newspaper. “Things happened, and then in the morning you read it in the paper. Or maybe at 10 at night you watched it on the news. But as the internet became more and more ubiquitous, suddenly the 24-hour cycle became a minute-by-minute cycle. It used to be that everybody was going to tell the story at 10, and they all wanted to tell it the best. Now it’s about who can tell it first. And any time speed is the premium, something is going to give, and usually accuracy is the first thing to go.

“Add to that the fact that the financial underpinnings of journalism as an industry have disintegrated. You used to have these monolithic newspapers and news reporting agencies, and they really acted as the gatekeepers for the truth about what was happening in the world. But the internet totally demolished the financial model for newspapers. Few people subscribe to papers anymore. And with that, staffs got cut back. So you have the evaporation of the gatekeepers’ will to be a gatekeeper — because they want to be fast — and also their ability to be a gatekeeper, because they’re trying to do things cheaply.”

Understandably, this shift has tanked the public’s trust in news sources. It is now the individual’s job to discern the truthfulness and quality of an article.

Dickson knew he had no way to solve problems in the journalism industry on a national scale. Instead, he focused on a question within his sphere of influence: How could he help his students at TMU navigate the modern news landscape? This question became the basis of his dissertation at USC. And now that he has earned his doctorate, he is working to incorporate the fruits of his research into his department’s programs.

The upcoming news media literacy course will be replacing mass communication as a required class for communication majors, and it will be designed as a practical how-to crash course.

“The way I’ve got it right now, the first four or five weeks of the course are on what ways news can be considered ‘fake,’ and how to recognize it in its various forms,” Dickson says. “There’s the classic fake news, which is a completely fabricated story. But there is also news where the headline might be slanted a certain way to frame the story before you even start reading it. And there are even more subtle things, like what quotes are used and not used, or what sources are used.”

On top of teaching practical skills, Dickson also hopes to touch on topics like journalistic ethics. But more than almost anything else, he hopes to emphasize the importance of one thing: self-awareness.

“One of the biggest ways that news gets slanted is that we slant it ourselves,” he says. On social media, we tend to follow people we already agree with, so the news we see in our feeds tends to only confirm our existing opinions.

“Everybody’s doing that right now,” Dickson says. “I don’t want to hear your facts, and you don’t want to hear my facts. And it’s not healthy. A republic can’t function that way. And the answer isn’t, ‘Let’s throw more money to the newspapers,’ because they’re just going to continue to do what they do. We have to be more intelligent consumers of the news. There’s no other way.”

According to Dickson, recognizing our own biases is a necessary step in learning to approach news in a discerning way. He hopes to model this himself in the classroom by focusing on critical thinking skills rather than attacking specific political stances. “Otherwise, I’ll be guilty of the very thing I’m teaching my students not to do,” he says.

At the end of the course, Dickson hopes that his students will be better equipped to be wise in their own news consumption, more thoughtful in their ability to engage with people of differing opinions, and more understanding of how to handle language with integrity in their future careers.