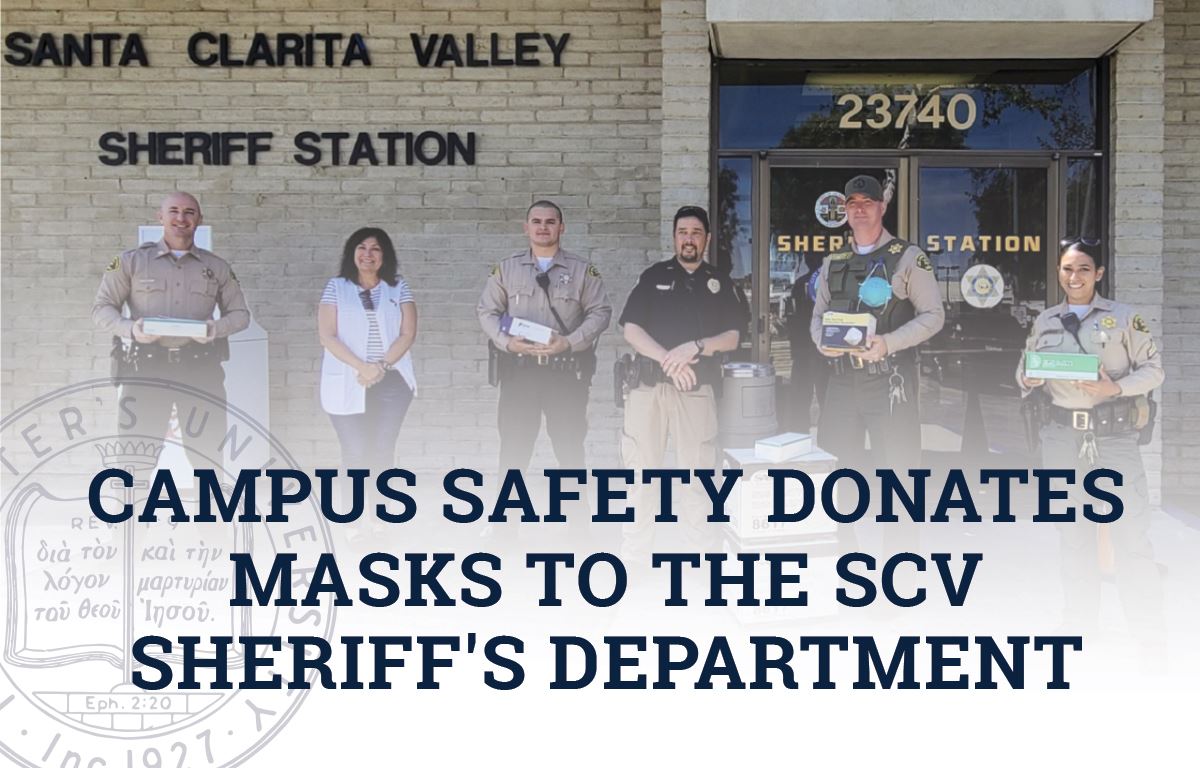 At the beginning of April, Lieutenant Bryan Kortcamp and campus nurse Sabrina Jensen delivered a donation of roughly 500 N95 masks and several boxes of gloves to the Santa Clarita Valley Sheriff’s Station.

This was not the first time that TMU Campus Safety has interacted with SCV’s law enforcement personnel; in fact, for more than five years now, Lt. Kortcamp has been working to build a relationship between the sheriff’s station and TMU Campus Safety.

“We started the process of arming our officers in 2015, and I knew it was going to be important to build that relationship with the sheriff’s department,” he says. He started attending Santa Clarita’s “Coffee With a Cop” events to start getting to know the various deputies.

“That really started the relationship. And it’s been really, really good ever since. I’ve known the last three captains they’ve had at the station . . . They’ve invited us to their trainings. They’ve done some training here on campus with us.”

In the summer of 2017, they even collaborated with Campus Security to host an active shooter drill on TMU’s campus. “They helped us plan the thing, and it was a full-scale exercise where we practiced real life scenarios in order to better prepare our team.”

In conversations that Lt. Kortcamp has had with the department’s lieutenants and trainers, they’ve remarked on how well-trained the Campus Safety team is. “Every time we get together, they say, ‘Hey, this is great stuff. We love having you guys.’ And they want to share with us just as much as we want to learn from them.”

Building this relationship is an ongoing effort for Campus Safety. As new deputies cycle through the station, Lt. Kortcamp gives them an open invitation to lunch on campus. About a year ago, Campus Safety collaborated with the Health Center to put on a “Ready Day”; nearly twenty deputies came on campus for a meal with the Master’s community, and students were educated about disaster preparedness.

Lt. Kortcamp and Sabrina Jensen were both placed on the task force in charge of monitoring and responding to the COVID-19 situation. It was in that team’s discussions that the idea of donating some of the school’s stockpiled supplies first came up.

Sabrina recalls the thought process behind this idea: “After the decision was made to close our school, we did not need the inventory that we had set aside for our students. It was natural to want to give our masks away, especially when the need was so great . . . Any opportunity TMU has to minister and reach out to the deputies, paramedics, and EMTs that come on our campus—especially the ones that continually take care of our students—is an opportunity to reflect and give the gospel, whether it be in word or deed.”

The rest of TMU’s staff and administration were enthusiastic about the suggestion, including Campus Safety. Lt. Kortcamp says, “I agreed that it was a great idea, and so I kind of took it from there, since I have those connections.”

Sabrina only wishes that the school had more inventory to give away. But whether it be through big gestures or small, Campus Safety, the Health Center, and the other departments of TMU have a heart to foster connections like these between Master’s and the broader community of Santa Clarita. Doing so serves our students and facilitates helpful cooperation—and even more importantly, it reflects the generous and loving heart of God.