An Impressive Resume & A Heart For Christ 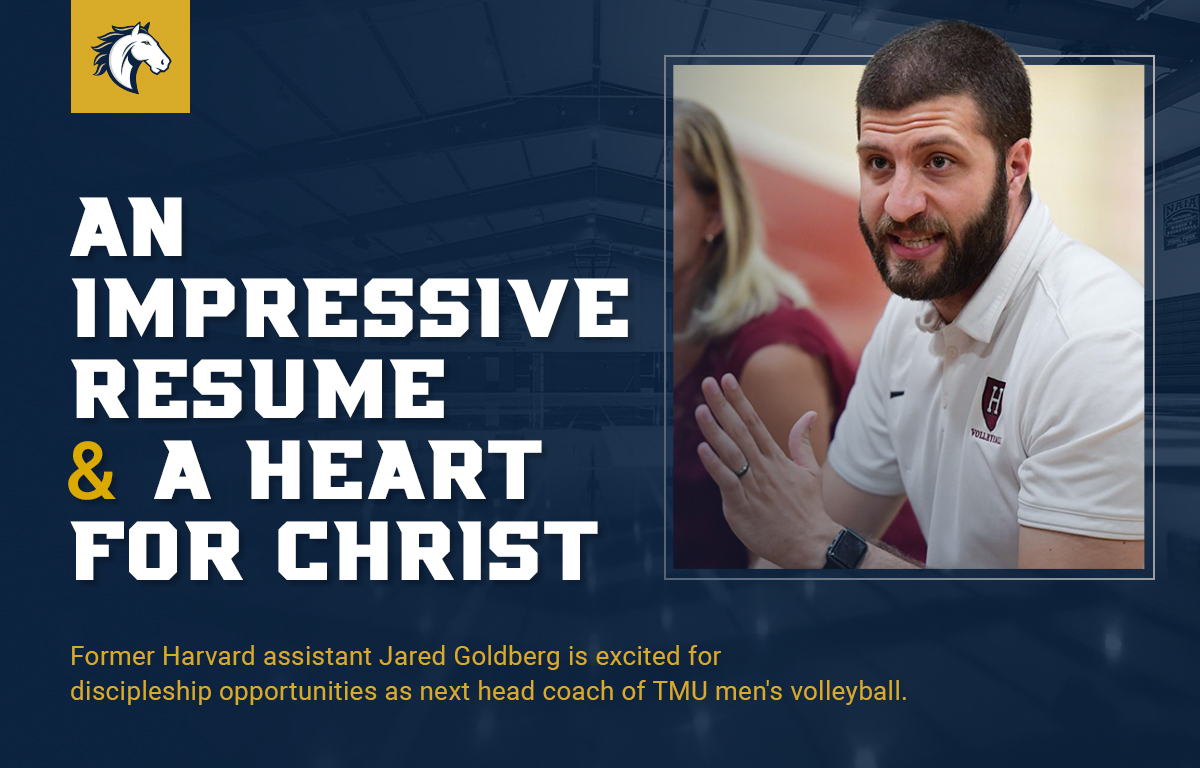 But it didn’t hurt.

“Quite honestly, in Boston I hadn’t been able to feel my toes for the last few months,” says Goldberg, who spent the last four years as a men’s and women’s assistant coach at Harvard University.

Of course, there were more serious reasons Goldberg elected to cross the country and take over a promising second-year program at TMU. He’s looking forward to discipling his players, raising his young family in Santa Clarita and applying the lessons he’s learned at each stop along an impressive coaching journey.

“I’m really just trying to put together a program where the guys learn to love the Lord and love volleyball — in that order,” Goldberg says.

As a practical matter, that means spending a lot of time building relationships with his players, getting to know them individually and as a group.

One of Goldberg’s first objectives after he arrived at TMU in early February was to meet with the Mustangs individually. Over the course of a week, he asked each player several questions: What’s your background? Why did you come to Master’s? What’s your testimony?

“It was really neat to get to know each person, where they’re coming from and where they’re trying to go,” Goldberg says. “As a coach, if you can understand that, then you can help them get to where they want to be.”

It won’t be hard for Goldberg to relate to his players because he’s been in their shoes. His volleyball playing career took him from the University of the Pacific in Stockton, Calif., to Grand Canyon University in Phoenix and, after graduation, to the Maccabiah Games in Israel as a captain of the U.S. men’s team.

He’s seen it all.

“I’ve learned how to sit on the bench and see people in front of me succeed, and I’ve learned how to be a role player,” says Goldberg, who was a setter. “I’ve learned how to try to lead a team, too. A team is full of people in a bunch of different roles and, quite honestly, sometimes they don’t like their roles. So, trying to relate to them and help them do what’s best for the team is one of the things I hope to accomplish.”

![](/images/jared-goldberg-1.jpg)
Jared Goldberg spent the past four years as an assistant coach for the Harvard men’s and women’s volleyball teams.

After graduating from Grand Canyon University in 2013 with a degree in sports management, Goldberg transitioned quickly into coaching.

He served as a graduate assistant at the University of Mississippi from 2013 to 2015, earning an MBA and learning to coach with excellence without letting the job take over his life.

“I worked for a coach there that — although it was big-time NCAA Division 1 — he did a really good job of not letting the job consume him,” Goldberg says. “And that’s sometimes a very difficult balance to find as a coach and something that I definitely strive for in my life, especially now that I have a family.”

In a recent interview, it didn’t take long for Goldberg to remember what he learned as a women’s volleyball assistant at Morehead State University in Kentucky. “I learned that I loved my wife,” he says, laughing.

Indeed, it was there that Goldberg met Aryn, who played volleyball at Morehead State before becoming a physical education teacher at a Christian school in the area. The couple now has two sons, Silas (1) and Simeon (4 months).

It was also at Morehead State that Goldberg says he really began to learn the ins and outs of recruiting.

“Quite honestly, women’s volleyball goes a little bit harder recruiting-wise, just because there’s a lot more athletes and a lot more teams are vying for the same players,” he says. “So I learned a lot on that end of things, some of which I’ll try to use as I get going at Master’s and start trying to devote a lot of time to recruiting.”

Then came Harvard, where Goldberg divided his time between the men’s and women’s teams beginning in 2017. He coached athletes to numerous individual awards and served as the primary recruiting coordinator for the men, helping sign the largest recruiting class in program history. He also coordinated travel, analyzed practice video and assisted in fundraising efforts.

In 2018, he helped the men’s team earn its first-ever trip to the NCAA tournament.

Looking back, Goldberg sees the benefit of balancing dual roles.

“Pulling double duty has really helped me get organized and figure out a plan and stick to it,” he says.

And then the plan — at least in the bigger picture — changed.

Goldberg says he was intrigued by the opening at TMU, in part, because he’d long been interested in coaching at a Christian school.

He grew up in a Christian home, but he says he didn’t come to know the Lord until he was a student at Grand Canyon University.

“That experience made me see the value of a Christian education and being in a place that has that kind of community and how much an individual can grow there and then go out and change the lives of others around them in the world,” he says.

He’ll have the opportunity to make that kind of impact at TMU.

“I’m ecstatic,” said TMU junior Christjan Tallara. “Not only is he a phenomenal coach, but he also has a strong relationship with the Lord. It’s something the guys were really hoping for in a coach.”

![](/images/jared-goldberg-2.jpg)
The TMU men’s volleyball team was a fan favorite during its debut season in 2020.

Tallara and TMU Men’s Volleyball created instant buzz across campus during the Mustangs’ inaugural season in 2020.

They were competitive. They were entertaining. They accepted with grace and solidarity the challenges that came with being a brand-new program in a pandemic-shortened season.

After the team’s first coach, Allan Vince, resigned after the 2020 season, Goldberg hopes to help the Mustangs continue trending in the right direction in Year 2 and beyond.

Says TMU Athletic Director Kelvin Starr: “His desire to disciple young men, coupled with his volleyball pedigree, makes him the perfect fit for TMU. It’s going to be fun watching him build the program.”

Goldberg will make his head-coaching debut Friday at 7:30 p.m. when the Mustangs host Hope International. Fans won’t be admitted to the match due to COVID-19, but live video and stats will be available at gomustangs.com/watch.

“I’m excited to get going,” Goldberg says. “… But Friday is just a snapshot of where we are, at one particular time. It just helps set the course for where we go from here.”