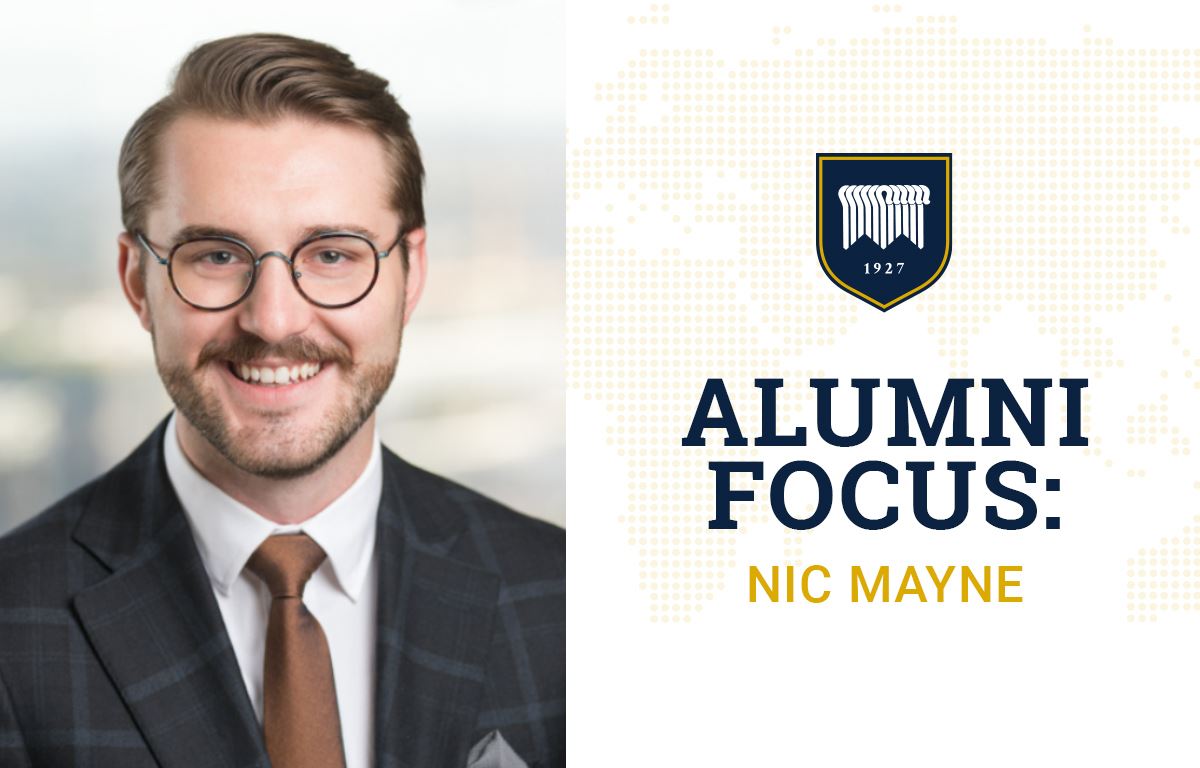 There are many reasons why a college-aged man might move from his home in Alberta, Canada down to LA in order to attend a Christian liberal arts school. For Nic Mayne, the reason was love.

“I met my [future] wife Katie on summer vacation . . . after the 10 th grade, and we sort of kept in touch. And I was really taken with her,” Nic says. “Master’s had come to her high school in Vancouver, WA and presented. She came down and visited, and she decided she wanted to go there. And so I essentially just followed her there.”

Despite having spent the semester before coming to Master’s at a Bible college in Spain, Nic’s aspirations were set on the field of law. He’d taken law classes back in high school, and he’d found that he enjoyed the sort of problem-solving that legal work requires. So, when he came to Master’s with Katie, he came as a Political Studies major.

Even though he ended up at Master’s by an apparent fluke, he found that he really enjoyed the unique benefits of being in such a tight-knit school. “I loved it. I mean, I think the Political Studies department was one of the highlights of Master’s for me. It is a very small group, and I think that was to our benefit. We all knew who we were studying with and got to know each other quite well by being in all the same classes.”

He goes on: “Having the opportunity to work really closely alongside a smaller group of people—having professors that actually take an interest in you and what you want to do—that was super helpful. And they were a big encouragement when I did eventually want to go to law school.”

Nic says that a lot of the relationships he built with faculty and other students are alive and well today. Even more importantly, things were still going well with Katie when they both graduated in 2015.

The next step for Nic was law school. The fall after graduating from Master’s, he went to study at the oldest extant law school in America: Harvard.

“I mean, Harvard is not a place I ever dreamed I would have an opportunity to attend. Obviously, I studied very hard for the LSAT and worked hard to get into a good school. But I applied to Harvard sort of thinking there was an off-chance I might get on the waitlist. I didn’t think I would actually get in!”

He believes that the small size of his Political Studies classes and the relationships he had with professors were part of the reason he excelled in his field and became an attractive candidate for Harvard.

After his first year at law school—and after seven years of knowing his future wife—the Maynes got married. Another two years, and Nic graduated from Harvard ready to begin a full-time career. Now he works at a law firm in Portland handling a variety of contracts for businesses, individuals, and educational institutions.

As Nic works every day in an environment of negotiating multi-sided issues, he’s grateful for the example that was set for him at Master’s. “Dr. Frazer would encourage me and others to take the opposite position on policy issues we were discussing . . . sometimes he would even take that role himself. And I think that’s so important, to learn how to defend what you think and believe—especially as a lawyer. On matters big and small, it’s important to be able to come up with reasons that you’re saying what you’re saying.”

“I think that’s especially true in law. But in society as a whole, and in faith and politics—and generally anything you hold to—it’s important to practice that defense of what it is you believe in. I think it strengthens and refines your own beliefs.”

This, and other aspects of his time at Master’s, have shaped the sort of professional he is now—both in his main job as a lawyer and his weekend job as an NHL player agent. And, after all the traveling and studying he did to get to this point, he’s happy to be doing work he loves.

“I enjoy my work. I enjoy what I do, both on the legal side and on the athletics side. And so, for me, it’s very rewarding.”

To learn more about the Political Studies Department, click here.