A Sudden End, A Solid Hope 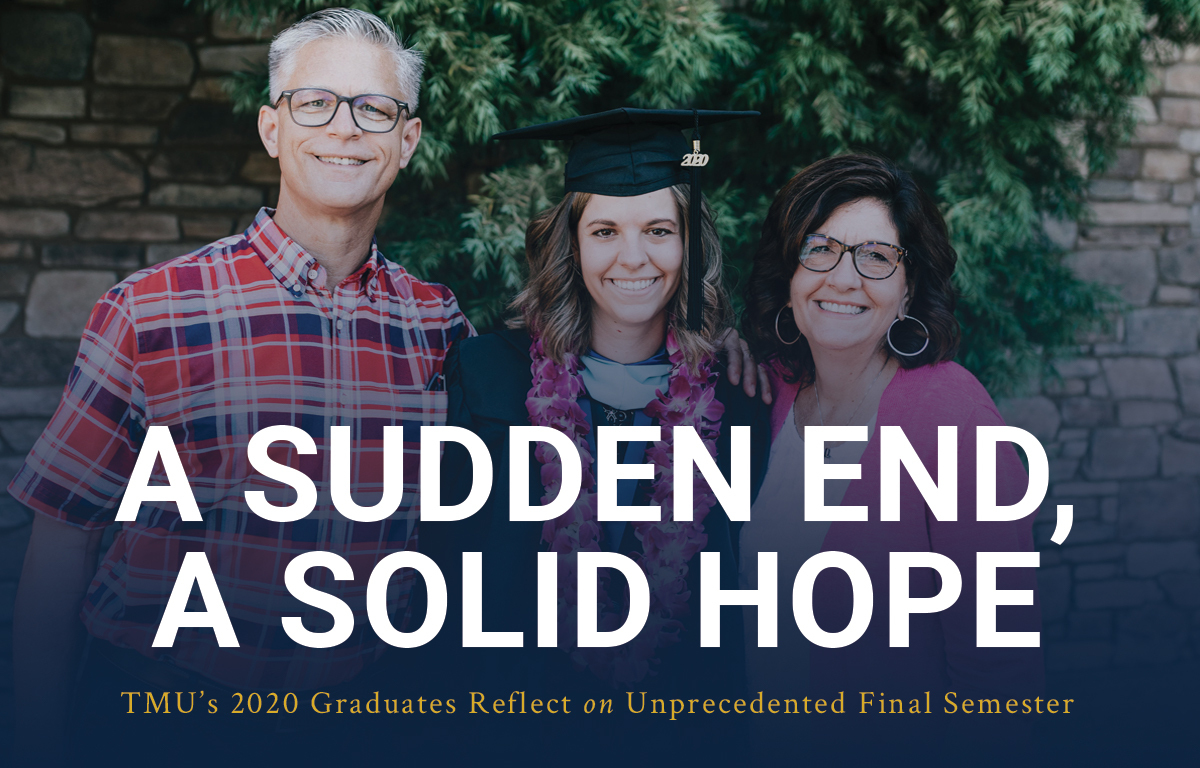 Kylie Brown was reminded recently of just how quickly her final semester at The Master’s University changed.

The marketing media major was scrolling through her iPhone when she stumbled across pictures of her beach volleyball team enjoying a March trip to Arizona. There were also photos of Brown and her boyfriend at Disneyland from around the same time. It had been a brief visit to the “Happiest Place on Earth” because they planned to return with friends the following week.

“We had no idea what was going to happen,” Brown says.

Brown and the rest of TMU’s 2020 graduating class endured an unprecedented end to their undergraduate studies. When the school’s campus closed in mid-March due to the coronavirus pandemic, students dispersed across the state and the country, a jolt that left no time for proper goodbyes.

There would be no final late-night runs to In-N-Out Burger. No postseason basketball games. No spring musical. Graduation was postponed until August.

Finishing their final semester remotely left many of the seniors disheartened and, at times, lacking motivation. They understood that people were suffering more difficult hardships across the world, but they still missed their friends, professors and a reliable space to study.

Even so, the time at home offered unexpected benefits. Some got a jump on furthering their education. Others found steady jobs. Many reconnected with family, sharing close quarters for the first time in years.

Ultimately, students whose time at Master’s came crashing to a sudden close found the resolve to finish well. They stayed in touch, they reflected on better times at TMU and, more than anything, they leaned into their faith in Christ.

“This shocked all of us,” Brown says. “But it didn’t shock Him.”

By the time Master’s students received official word on March 18 that the semester would continue exclusively online, many already suspected that would be the case.

Katherine Pennington, a senior communication major, was at home in Dallas on spring break when she learned she wouldn’t be returning to school. A friend would eventually pack up the contents of Pennington’s dorm room and ship them to Texas.

“It was strange to not have any closure and to realize that we never said goodbye,” Pennington says. “You never had any last anything. It was just kind of over.”

The news held greater weight for Pennington, who had been cast as a lead in TMU’s spring musical, scheduled to premiere in late March.

She had been involved in seven productions at Master’s over the past four years. And after investing up to 10 hours per week in preparation for “She Loves Me,” she was looking forward to playing Ilona Ritter, a shop clerk trapped in a toxic relationship who eventually learns to stand on her own two feet.

Instead, Pennington was temporarily knocked off hers.

Early on, she was tempted to say, “We should have been opening tonight or we should have had a show today.” She quickly realized that mindset wasn’t helpful.

“If you’re looking from God’s perspective, it was never going to happen anyway,” she says, “and there’s got to be a reason for that. So I chose to be grateful and say, ‘Hey, we got those memories, we had the rehearsals, we grew so close to each other, the cast and crew.”

Elsewhere, TMU’s highly ranked men’s and women’s basketball teams learned they would not be making scheduled trips to the NAIA national tournament. The women’s team in particular was a favorite to win a championship.

“I definitely was really sad because I love beach volleyball. I love the girls. I love (head coach) Annett (Davis),” Brown says. “And we had just gotten into our groove.”

More disappointing, Brown says, was not being able to end her stay at Master’s with all the people who made it an enjoyable experience.

“Those last few weeks are so special. It’s your last time with your graduating class and with your professors,” she says. “You’re making the last food runs with all your friends and getting ready for graduation, finishing finals and walking across the stage.

“It felt different. I finished school, but I was in my bedroom by myself.”

For Mauricio Farrell, even that wasn’t a possibility. The senior kinesiology major says last-minute plane tickets to Florida during spring break were too expensive. So he moved in with a friend’s family in nearby Valencia, Calif., while he looked for a job.

It was a dramatic pivot for TMU’s student body president. Instead of attending The Monty’s — TMU’s annual talent show, which was ultimately canceled — and hosting the Year End Show, he found himself watching a modified version of the latter on YouTube.

“It was tough to have some of our favorite events left, and we can’t do them,” he says.

Instead, Farrell found work at a grocery store, which allowed him to move into an apartment as he waited to begin TMU’s teaching credential program this fall.

Farrell said transitioning off campus and working 40 hours per week made it difficult to focus on schoolwork. He was also struggling to find the motivation to finish.

He wasn’t alone. Brown says she stopped doing homework during TMU’s extended, two-week spring break — and for another week after that. For other students, disappointment mixed with “senioritis” made for an uphill battle.

And it wasn’t the only challenge. Some students missed the structure and hands-on nature a classroom provides. For others, the logistics of studying at home weren’t always ideal. Students could no longer lounge at a table inside TMU’s library or find a spot at Trophy Coffee, the on-campus coffee shop.

At home, students shared space with family members, who in some cases also were working or studying from home.

After arriving in Peoria, Ill., Molly Laugherty’s home flooded. Certain power outlets didn’t work and construction provided a less-than-optimal soundtrack for productivity. “It was really hard to focus,” she says.

But if the 2020 graduates grew discouraged, they didn’t stay that way. Farrell found encouragement in connecting with classmates over FaceTime. He said he felt better knowing he wasn’t the only one facing difficult circumstances.

Brown’s focus changed as she began to pray.

“I think the key was to not focus on the weirdness, or the news, or the fact that I couldn’t go anywhere. I knew I wouldn’t be at school finishing, but it was just like, ‘OK, God had a plan. And I need to finish this and I need to graduate,’” she says.

Laugherty, who said she especially missed quality time with the women in her dorm, focused on the fact that God “never wastes our pain.”

“God does all things well but not always pleasantly,” she says, adding that family members “were such big cheerleaders for me. So that helped.”

Laugherty enjoyed reconnecting with relatives she’d lived nearly 2,000 miles away from during college. They played games — like Spades and Ticket to Ride — and she helped her three nieces, ages 6 to 10, with homework.

Even though Brown commuted from home, she says she only returned there to sleep. In addition to playing beach volleyball, she coached at a local volleyball club and worked as a social media intern in TMU’s marketing department. When it all came to a screeching halt, she didn’t need to move — but it still felt like a major transition.

In addition to family time, Josh Morton used the COVID-19 quarantine to get a jump on medical school.

Morton, a senior biology major, had been planning to wait until fall 2022 to continue his studies. But after going home to Twin Falls, Idaho, in March, he found he had far more free time. No longer training with TMU’s men’s volleyball team or working an on-campus job, he began studying for six to seven hours per day, for three months, to take the Medical College Admission Test.

He sat for the exam in August and, pleased with his score, applied to 24 medical schools, already securing an interview.

His progress eased the disappointment of not traveling to Togo, Africa, in May with one of TMU’s Global Outreach summer mission trips — as did memories of his mission trip to India the previous year.

“It’s like an earthquake,” he says. “… You can’t hear a single word over the noise of the crowd.”

Pennington enjoyed every minute of preparing for what would have been her final show.

“I love the cast and crew of ‘She Loves Me,’” she says. “Everyone was just so intentional with one another and so encouraging and so uplifting. There were no divas.”

And Brown cherishes Bible classes that shaped her thinking.

“I learned so much more about Scripture,” she says. “I mean, it’s all applicable, it’s living and active. But just seeing little things like, ‘Oh my gosh, Paul references that, or Jesus references that in the gospels, and why didn’t I connect that sooner.’”

On Aug. 29, Brown and her classmates received a bit of closure. Those who could make the trip assembled for an outdoor ceremony at Grace Baptist Church, finally hearing their names called and walking across a stage. They each posed for a socially distanced picture between Master’s President Dr. Sam Horn and Chancellor Emeritus Dr. John MacArthur.

“You all experienced a really rough landing last spring, to say the least, due to COVID-19,” Stead said. “… What was accomplished by this class in terms of moving out of the dorms, completing your classes online, with no graduation ceremony, was really amazing.”