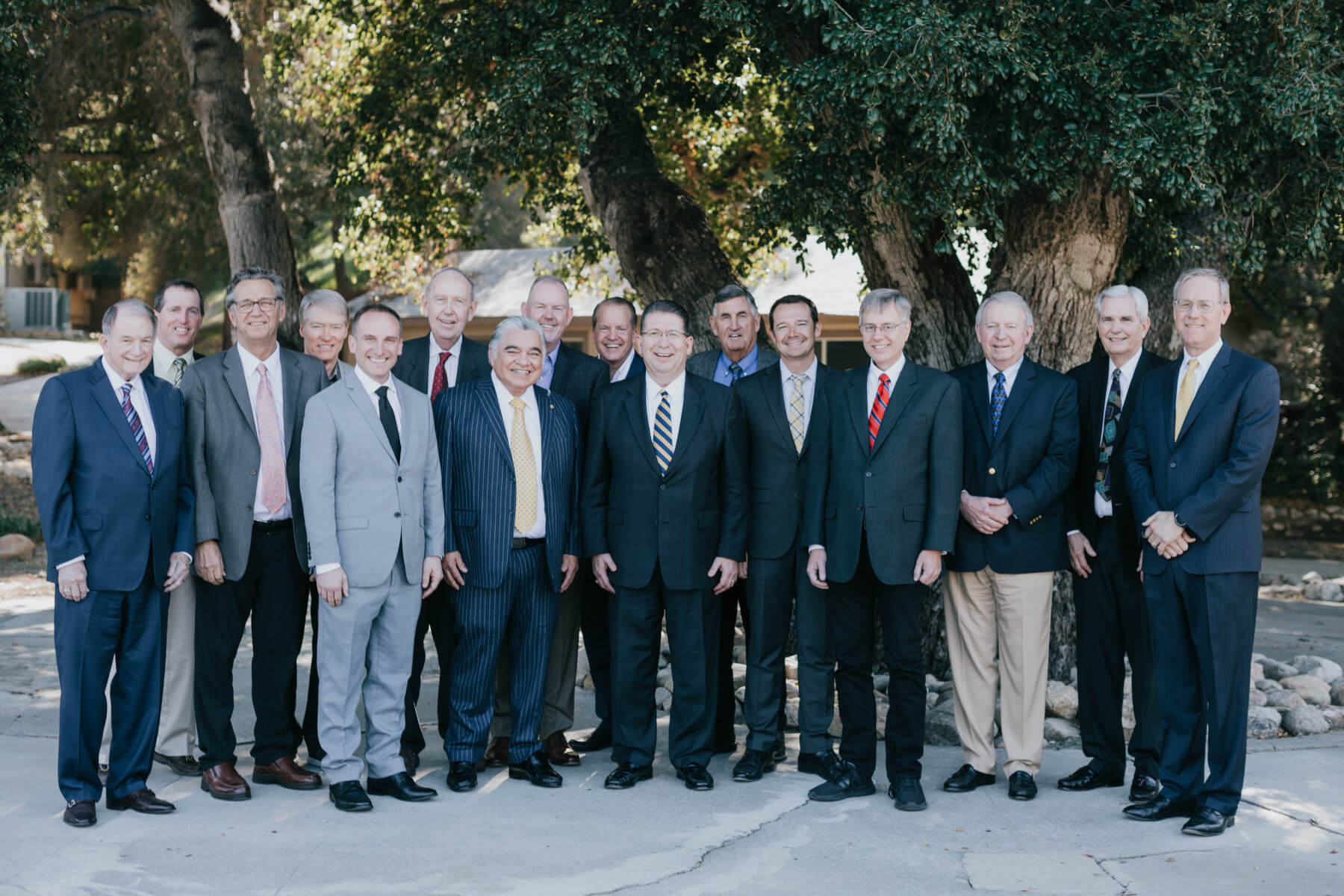 Scott Ardavanis is the Senior Pastor of Grace Church of the Valley in central California. Scott began his pastoral ministry at Grace Community Church with John MacArthur and also spent seventeen years as a senior pastor in Chicago and California. He is an adjunct professor at The Master’s. Scott is a featured speaker at Bible and pastors conferences around the world. He also serves as a board member for Sufficiency of Scripture Ministries, which impacts lives in Uganda with sound Biblical teaching. Scott earned his degrees at Los Angeles Baptist College (now TMU), B.A., The Master’s Seminary, M.Div., and Trinity Evangelical Divinity School, D.Min. Scott and his wife, Patty, have been married 31 years and have 7 children and 3 grandchildren. Scott has served on the TMU board since 2017.

Brad Armstrong is a businessman who lives in Thousand Oaks, CA. He has served on the board since 2015.

Philip De Courcy is the senior pastor of Kindred Community Church in Anaheim Hills, Calif., and speaker on the daily radio program, Know The Truth. Philip is from North Belfast, Ireland. After beginning his career as an engineer in the aircraft industry he switched gears and attended Irish Baptist College for his ministry training. He spent six years leading the congregation of Carr Baptist Church in Lisburn, a suburb of Belfast. He then enrolled in The Master’s Seminary and has since shepherded churches in southern California and central Ohio. Philip and his wife, June, have three grown daughters and one son-in law. Philip has served on the TMU board since 2004.

Richard Dewey is a professor of neurology at UT Southwestern Medical School in Dallas. He earned a BA from Duke University and an MD from Baylor College of Medicine. He completed his neurology residency and fellowship at Mayo Clinic in Rochester, Minn. and is board certified in neurology. He has published over 100 articles in scientific journals, and his work includes direct patient care, teaching of students and residents, and research in Parkinson disease. Dr. Dewey is an elder at Countryside Bible Church in Southlake, TX where he is also a leader in the home fellowship ministry. His hobbies include hiking and computers. Richard has served on the TMU board since 2016.

Bryan Hughes is the Senior Pastor of Grace Bible Church in Bozeman, MT, where he has served for the past 35 years. He earned his BA from Moody Bible Institute in Chicago, his Master of Arts from Western Seminary in Portland, Oregon and his D.Min from Trinity Theological Seminary in Newburgh, Indiana. Bryan has taught at Bible colleges in Ukraine, Tanzania and Siberia, as well as classes in Albania, Russia, Turkey, Ethiopia, Poland, and Italy. He is the author of 8:28 - Unlocking God’s Promise and Jesus’s Teaching on the Last Days. He presently serves on the faculty of Montana Bible College in Bozeman. Bryan enjoys hunting, reading, and playing basketball. He and his wife, Bev, have three grown children and three grandchildren. Bryan has served on the TMU board since 2000.

George Jackson is a businessman who lives in Kingsburg, CA. He has served on the board since 2015.

Jesse Johnson is the Teaching Pastor at Immanuel Bible Church in Northern Virginia. He is a graduate of The University of New Mexico (B.A. in Sociology and Spanish), as well as The Master’s Seminary (M.Div., Th.M. in Systematic Theology). Prior to joining the board, Jesse taught theology at The Master’s Seminary, and before that at Christ Baptist Seminary in Polokwane, South Africa. Jesse has been an editor and contributor for numerous publications and books including Men of the Word and Right Thinking in a World Gone Wrong. He and his wife, Deidre, live with their three daughters in Washington, D.C. Jesse has served on the TMU board since 2015.

Felix Martin del Campo Jr. is a dentist in Visalia, Calif. He attended USC for his undergraduate work and then graduated from the UCLA School of Dentistry. Felix also serves on the board with Samaritan’s Purse and has served for more than four decades with World Medical Missions. Alongside 800 other doctors, he goes around the world to relieve long-term missionaries on furlough. His specialty is designing and setting up state-of-the-art mobile dental clinics. North Korea and Siberia, among other countries, have benefited from such ministries. He enjoys photography in his spare time and has been married to his wife, Janet, for 46 years. Felix has served on the TMU board since 1992.

Robert Provost is the President Emeritus of Slavic Gospel Association. He lives in Loves Park, IL and has served on the board since 1994.

Rich Riddle is a retired businessman. He lives in Bradbury, CA and has served on the board since 1995.

Jonathan Rourke has served as the senior pastor at Tri-City Bible Church in Vista, California since 2011. He is a graduate of The Master’s Seminary (M.Div, Th.M), and served on staff at Grace Community Church for ten years. Jonathan and his wife, Catherine, have been married for 20 years, and have four children. Jonathan has served on the TMU board since 2015.

George Sanders practices plastic surgery in Los Angeles. He was born and raised in Southeast Texas. George attended Harvard Medical School then completed his general surgery training and plastic surgery residency at UCLA. George is privileged to have served as an elder at Grace Community Church since 2000. He teaches biblical counseling, a premarital class and also gives oversight to international missions. George and his wife, Anna, are certified in biblical counseling and often counsel together. In their spare time they love to serve in ministry together as well as travel, entertain, and just “hang out.” Both of their adult children are married, live close and are a major part of their lives. George has served on the TMU board since 2007.

General Mark Shackelford is a graduate of the U.S. Air Force Academy and California State University, Fresno with degrees in Astronautical and Mechanical Engineering. He served in the Air Force as a pilot, test pilot, program manager, and senior staff officer culminating as the Military Deputy in the Office of the Assistant Secretary of the Air Force for Acquisition. Since 2011, General Shackelford has served as a technical management consultant to aerospace firms that build aircraft, launch vehicles and satellites. When not at work, General Shackelford lives with his wife, Kathryn, in Trophy Club, Texas and enjoys reading, gardening and serving his wife in any way he can. General Shackelford has served on the TMU board since 2017.

John van Wingerden is the owner of Green Circle Growers in Oberlin, OH. It’s a family business he has built over the past 50 years where flowers are grown and sold. He comes from a family of 16 siblings that immigrated from Holland. He and his wife, Dawn, have eight children, all of whom have come through The Master’s University. John has served on the TMU board since 2001.

Brad Wetherell is a retired banker after 35 years in the business. Originally from New Hampshire, Brad served in the U.S. Air Force before beginning his banking career in a small town bank in New England. Brad moved his family to California in 1976, and was the head of three separate banks in Los Angeles before forming the Ventura County National Bank in Oxnard of which he became president. He is the Chairman of the Board of Ivy Lawn Memorial Park and Funeral Home in Ventura. Brad and his wife, Barbara, have been married for more than 50 years, live in Camarillo and have two adult children, five grandchildren and five great-grandchildren. Brad has served on the TMU board since 2015.