PhD in Mathematics from the Graduate Center at the City University of New York and co-author of Topology: A Categorical Approach (MIT Press, 2020). She has authored a number of academic papers at the intersection of mathematics, quantum physics, and machine intelligence and is the former co-host of the PBS YouTube channel Infinite Series. She currently works as a Research Scientist in math and machine intelligence at a major technology company. She is also the creator of the popular mathematics blog math3ma.com.

Prof. Crater started his career in Colorado, working on satellite systems for the Air Force—first as an officer and later as a contractor. He then worked for several years for the state legislature of Colorado, and later briefly served the U.S. House of Representatives in Washington, DC. Afterward, he moved to Indiana to work for the Navy in electronic warfare systems. He then moved again, this time to Los Angeles, where he continued to work for a time as a software engineer in defense and intelligence satellite systems. All along the way during his career, he pursued various interests through graduate academic work, including in the fields of computer science and theology. This opened up the opportunity to transition his career toward academia in his current role at TMU, while still maintaining productive connections to industry. In his free time, Prof. Crater enjoys reading, golfing, and skiing. 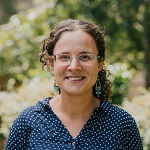 Dr. Monica Vroman was born and raised in Romania and completed her undergraduate studies in computer science at the Politehnica University of Bucharest, where she earned a bachelor’s and a master’s degree. After college, she moved to New Jersey to study machine learning at Rutgers University and earned her PhD under the supervision of Dr. Michael Littman. During her graduate studies, she became increasingly interested in teaching and education, especially in exploring how computer science can be best taught to students from various backgrounds. During her studies at Rutgers, Dr. Vroman met her husband Dave, and they moved to California in 2015. Dave graduated from The Master’s Seminary in 2019 and became a senior chaplain in the LA county jail system in 2020.