Why History at TMU? 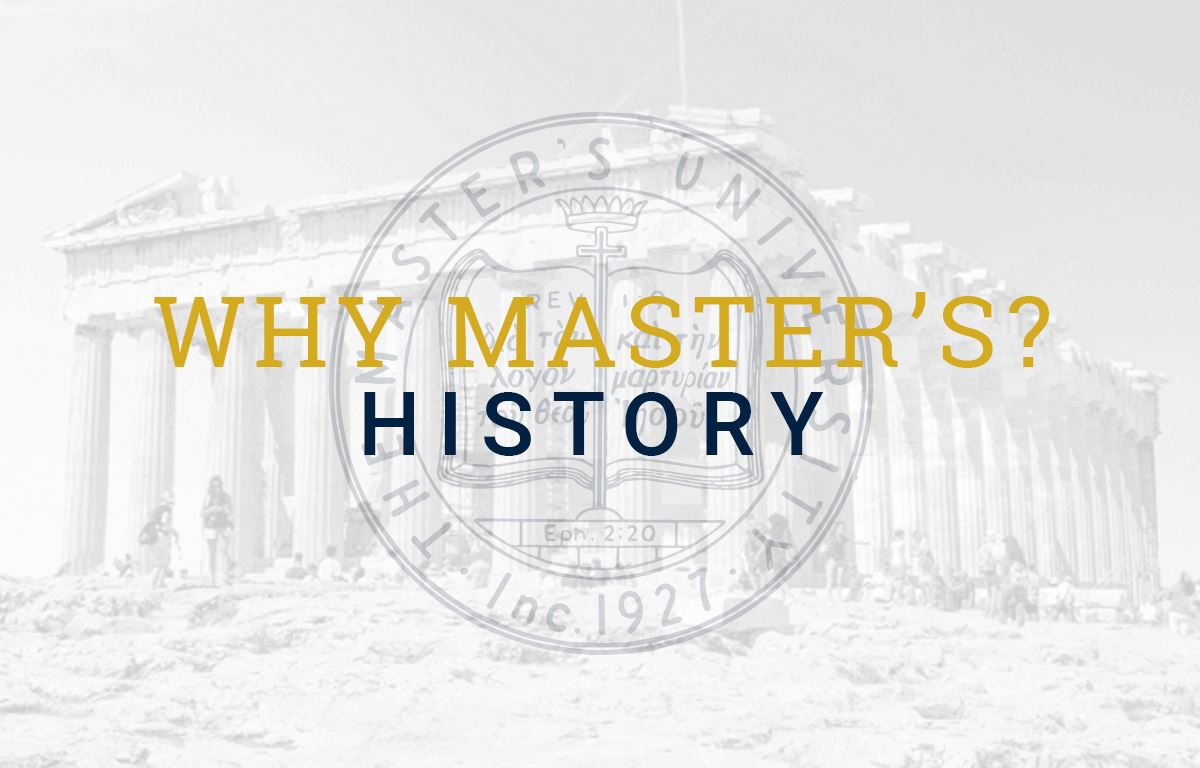 Why bother with history?

Of what value is it to me personally?

Life is crowded with all kinds of pressing “right nows,” so who has the extra time to devote to a study of the past? And, of course, in a narcissistic age such as ours, where it’s all about ME, then the dead and nearly dead (anyone over 50) are, at most, worth only a moment’s reflection, if that. Then there are those of us oh-so-politically-correct, so full of our own righteousness and infallibility, that we scorn the study of history because those who “made” it were racists or misogynists or homophobes or guilty of some other breach of political correctness. What can we possibly learn from, or appreciate about, such horrible people?

For the rest of us, however, knowing some history (in both a broad and narrow sense), is important because other people in past times are important (or should be), just as our family is important, and our friends are important, and our neighbors are important. (What did Jesus say about our neighbors?) Interacting with family, friends, and neighbors helps us develop and grasp what it means to be a human being, what it means to be part of a family, or a community or a nation. But the process is incomplete without a knowledge of history. Knowing history contributes to our ultimate maturity as a person, for we come to realize that we are not self-made. We realize we are connected by our common humanity to those who came before, but also in part, are even shaped by them and what they thought and did.

So, knowing history is important.

Properly studied, it allows us to participate vicariously in the past.m And this in turn matures us by humbling us with the knowledge of human foibles, failings and, yes, the ugliness of which we are capable. But it also allows us to hope and be inspired by the good we have chiseled with difficulty into history’s chronicles.

Let me give an example. I taught Reformation history at The Master’s University for almost four decades. I would always require the students to read documents from the period: letters, essays, commentaries, diaries, etc., written by individuals who were experiencing the changes and turmoil, and often persecution taking place. One such document was a letter written by a young Anabaptist mother to her newly born daughter. Now that is a bit odd, you might think, but she had no choice. She wrote the letter from her jail cell. The next morning, she was to be burned at the stake—publicly—for being a heretic. Anabaptists were the first Christian group that believed in total separation of church and state. They also denied the validity of infant baptism. Only a confessing adult should be baptized. At this time, both Catholics and Protestants considered such beliefs anathema to the well-being of the individual and society as a whole, and thus, they severely persecuted the “radical” Anabaptists. The young mother’s husband had been put to death months earlier for the same offenses, but because she was pregnant, she was allowed to have her baby before she too was burned at the stake. The baby was given to her sister, who was a Catholic, to raise.

Although the letter was written approximately 500 years ago, it speaks to us still.

As we read it, we cannot help but share in her heartache, her anguish of soul, even to the point of tears. And we are deeply moved by her unwavering faith in her Lord Jesus, her passionate desire that the daughter she will never raise would know her mother’s circumstances, and her plea that her daughter, when grown, will believe as her mother believed, no matter the cost. After reading the letter, one cannot help but be angered at the injustice that had been committed.

Interestingly, a century later, a fiery young minister named Roger Williams fled the Puritan colony of Massachusetts before he could be arrested for also advocating separation of church and state. More importantly, he espoused “liberty of conscience,” which declared that the state had no right to force people to believe and act publicly against their conscience in their relationship with God. Jesus Christ, pastor Williams stressed, persecuted no one nor did He advocate persecution. The state, therefore, had no right to persecute anyone in Christ’s name. Williams had been deeply influenced by Anabaptist writings. So, Williams fled Massachusetts and went south beyond its reach, bought some land from the local Indians and established what became known as the colony of Rhode Island. There, in 1638, along with about three dozen families, he established Providence township. Written into the town’s charter was a guarantee of liberty of conscience. Western Christianity was forever altered. Gradually this “radical” concept spread to some of the other American colonies and eventually became embedded in the first amendment of our Constitution. Why is it important to know this particular aspect of our history? Because liberty of conscience undergirds all our other freedoms. Without liberty of conscience we really have no freedom of speech and action. Moreover, liberty of conscience is once more under attack in present day America under the guise of political correctness.

I could have, of course, chosen a hundred other examples to show the value of knowing history. I’m tempted to write “the necessity of knowing history.” As mentioned above, a knowledge of history matures us, humbles us, and if we are wise enough to allow it, it can make us wiser. Knowledge of how people have acted in the past in a particular situation is a good indicator of how they will act in the present in a similar situation. The old adage “forewarned is forearmed” is the voice of history speaking to us. But so far in this essay, I have only spoken of the value of knowing “big” history, such as the history of America, etc. This history seldom makes room for the common person such as you and me. This “big” history affects us but at the same time ignores us.

But there is another type of history that not only affects us on a daily basis, often more so than the “big” history, but is also about us.

This history is local history.

Local history (or histories for there are many), is family history and community history. I doubt, at least out West, there is a small city, town, or even village, if it can manage it, that doesn’t have a yearly “pioneer days” or “founders day” celebrating the early beginnings of the community. And nearly all of them have historical societies devoted to keeping the past present, so to speak, by supporting and operating local museums filled with old newspapers, oral histories of old timers, and paraphernalia of all kinds from the past—from old mining equipment to you-name-it, all chronicling the community’s passage from founding to present. It is uniquely our story, our history. Usually such activity and concern for the past is gathered and managed and funded by volunteers. They are to be highly commended for their wisdom and insight, and they are rendering an invaluable and precious service to their community in reminding the present inhabitants of their inheritance and obligation to remember. The traditions we nurture and the celebrations we enjoy is a way of saying to those who preceded us, “thank you.” Local histories remind us that we don’t function well in isolation, either from our living neighbors or from those who came before us. Being a good and caring neighbor is not something we invent but rather something we both inherit and learn from a previous generation.

This brings us to the most important and intimate of histories—our family history.

Every one of us is born into this world with a history attached. At the family level, our personalities are, to a great degree, shaped, our values established, our mannerisms and quirks born; we even learn and value the history represented by our name. And our family history becomes a part of our own personal history. In a sense, it tells us who we are. And, whether we want to or not, there is a sense in which, as we grow older, we will become our parents and grandparents and great grandparents. We may ignore our family history, or be indifferent toward it, but we cannot escape it.

Why bother with history?

Because without it, we are less than we could or ought to be. In one sense, how caring and thoughtful and wise a society is can be assessed by how much it values history. A selfish and self-indulgent society will be one that ignores or scorns history. And it will be a deeply troubled society that may not survive.