Vote the Issues, Not the Individual

Almost every American citizen has commented on the current campaign for presidency, regarding it the most debased one in US history. Christians have been at a complete loss as to what to do and how to vote.

Likening the major party candidates to Herod and Jezebel, many ask: how can I choose the lesser of two evils? Can I sincerely put my support, my vote, behind a candidate as corrupt and foolish as Donald Trump or Hillary Clinton? Others have thought about not voting at all or merely putting their ballot in for a third party representative to appease their conscience; feeling that if they throw their support behind either, they would not be able to justify their reasoning.

On November 2nd The Master’s University held the first in a series of Summits, this one specifically addressing the 2016 Presidential Election and Current Events. The four panelists: Soeren Kern, John MacArthur, John Stead and Gregg Frazer, adeptly addressed a captive audience of over one-thousand two hundred attendees on the issues facing our nation and concerns surrounding this year’s elections. The main question on everyone’s mind: Whom do we vote for?

However, rather than simply stating the answer, the panelists logically went through what one should look for in a candidate based upon biblical principles, trusting each person to reason for themselves and draw their own conclusions.

MacArthur stated the purpose of the government based upon Romans 13, “Government is designed by God for the purpose of restraining evil and providing safety for people who do good” and each discussion: foreign policy, economics, religious liberty, etc. came under that umbrella. What are the consequences of each party’s agenda?

Stead instructed it’s not the candidate we need to control, “it’s the issues. How would you treat each of these things in relation to yourself, your family, and your Christian testimony?”

One candidate’s platform answers yes to each of these questions and the other’s — no. With the Electoral College, unless a miracle were to occur, one’s only choice is between Clinton and Trump. Each panelist acknowledged that neither is optimal, but they are the choices nonetheless. 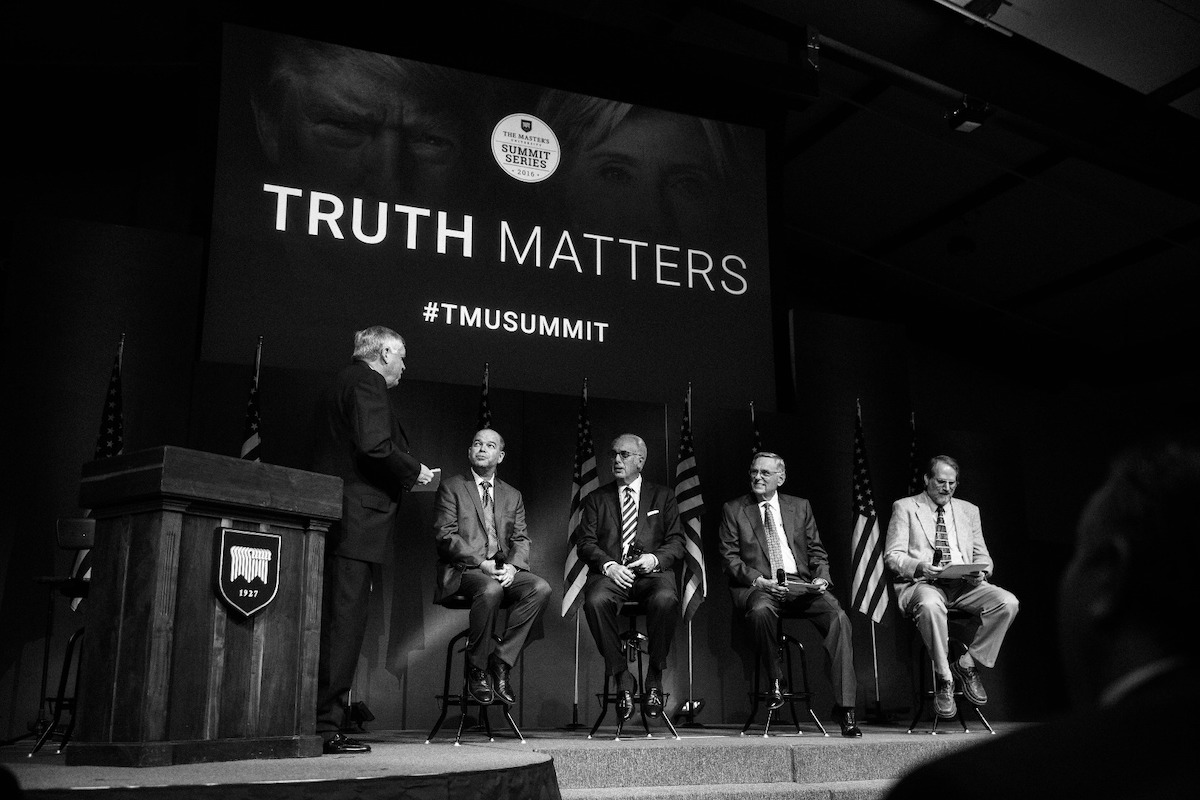 “A vote is a means to an end, it’s the end that matters,” Frazer stated. He continued, “the ‘lesser of two evils’ issues is only a problem if both candidates would do evil if elected. Neither candidate is the embodiment of evil . . . but we know that one will do evil. I am going to vote against Hillary Clinton by punching the hole next to Donald Trump’s name. I’m not voting for Trump, I am voting against Clinton, for she will do evil.”

Many have expressed feeling discomfort in voting for either candidate, Frazer defined this as “feeling icky” and said, “As a human being, and not an animal, you have reason and your reason can overrule your emotions. No one likes surgery. It’s icky. But you do it to achieve a better end, which is health. Allow your reason to overcome your emotions. There are bigger issues involved than your emotional comfort.”

After an hour-and-a-half discussion, where at times one could hear a pin drop, the panelists made their closing statements with Soeren Kern acknowledging that the “world is on a precipice, the conditions in the world are chaotic and the United States needs a leadership that will reassert its military power, and with that some sort of order.” He went on to say that what is needed is, “Americanism, not Isolationism” when there are so many emerging world powers. Kern continued to explain that the current “lack of American leadership has left a void that has given rise to instability around the world.” MacArthur concluded saying, “the most important ‘agency’ in the world is the church,” and while he is concerned about what happens in the world, he is “far more concerned about what happens in the church.” His final encouragement for the night was that “what happens in America has nothing to do with the kingdom of God”.\ 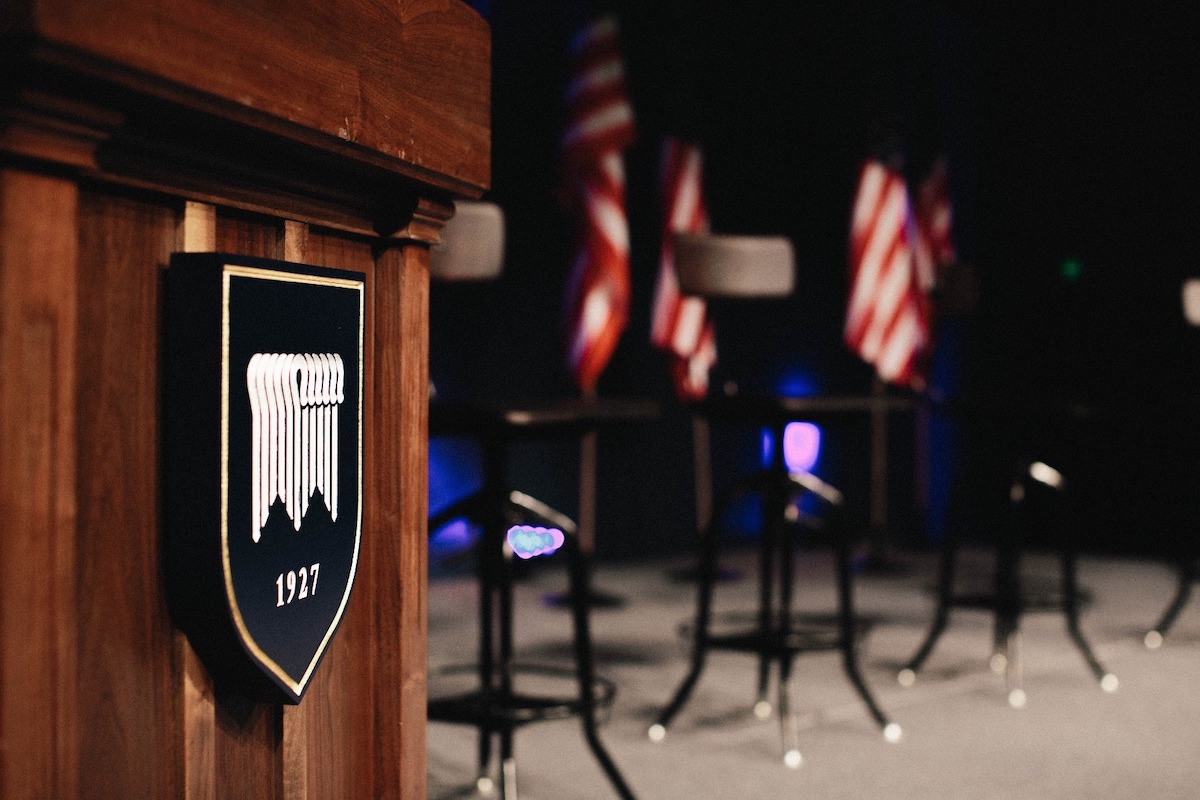 As Christians, we have a hope secured in Christ. We know that the chaos displayed in this election and the turbulence we witness on the news daily is only a means to an end for God. We know that He will establish His kingdom and that He works “for the good of those who love Him and are called according to His purpose” (Rom 8:28). We’re not promised, in a sin- stained world, that life will be easy or comfortable; in fact we’re promised persecution. If we know “we can do all things through Christ who gives us strength”(Phil. 4:13), then we know — no matter the outcome of the election or what we see unraveling around the globe — we can still be a testimony to the God who saved us from corruption and the consequences of sin. As Christians we have the greatest platform and agenda of all: to share our faith.

In this election, like most that have come before it, we are not voting for the most “righteous” candidate. Our votes should be cast considering the issues each political party supports, especially when those issues directly contradict Scripture.

To watch the Summit please go to masters.edu/summit

The Art of Fear