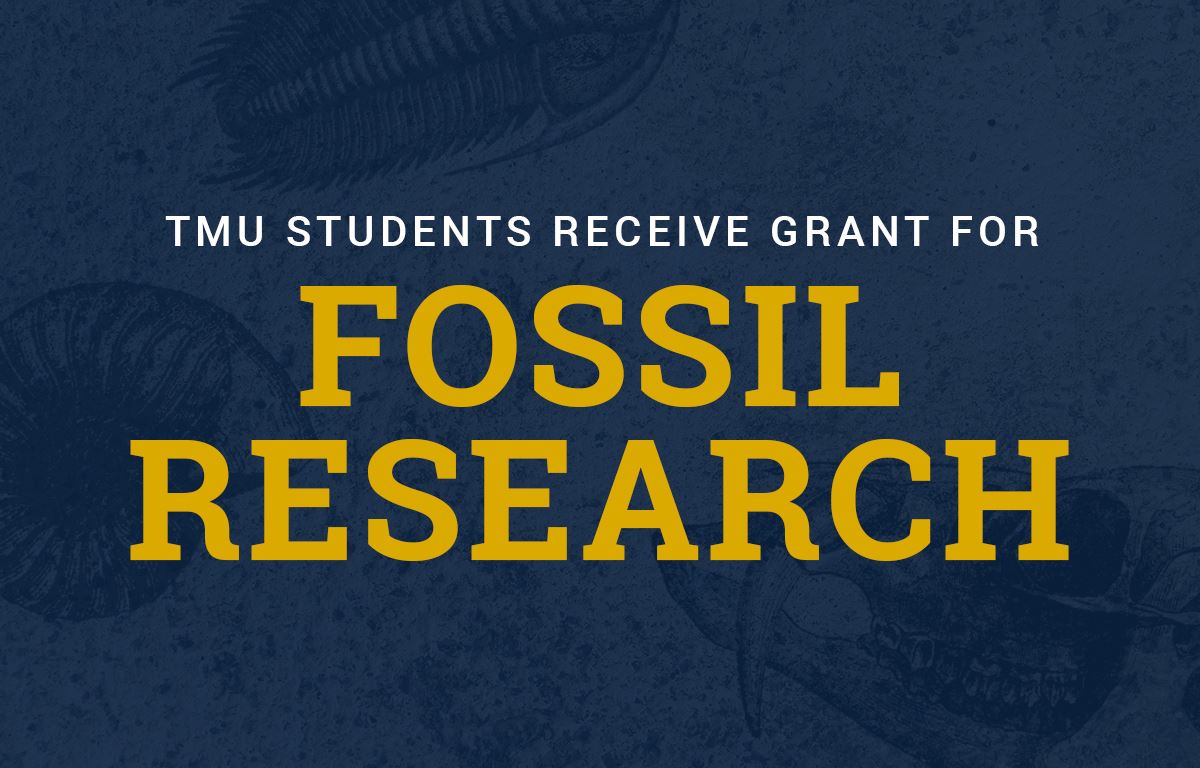 “Phytosaur” is a name that most people have likely never heard. Even in the realm of paleontology, relatively few scientists have chosen to specialize in these strange Triassic fossil reptiles. However, for a handful of people at TMU, these creatures have become the subject of a passion project. And now, this passion project has received formal funding.

This past December, Core Academy of Science announced the three winners of its 2020 Sanders Scholarship, which awards funds to help Christian students research “the hardest problems in creation.” Among the winners was Joseph DeVore, a student in TMU’s Biology Department.

Joseph works as part of a team of students under the leadership of Dr. Matthew McLain, Associate Professor of Biology and Geology (and TMU’s resident fossil expert). Together, they have been exploring a puzzling question: why do phytosaurs look so much like crocodiles?

“There’s different terms for that; you can call it analogy, or some people call it convergence,” explains Dr. McLain.

Regardless of the term, the issue of convergence has been an active question in biology. Why, for example, do anteaters look very similar to aardvarks, despite being native to opposite sides of the globe? The question is difficult for evolutionists, who must try to explain why two species would evolve so similarly, despite apparently having developed independently.

But according to Dr. McLain, the answer isn’t simple for creationists either. “We could easily just say, ‘Oh, God made it that way,’ but that would stop investigation in its tracks. Were multiple groups of animals designed with the ability to take on a crocodile-like shape, and if so, how and why does that happen?” The research team is hoping to help answer those questions.

The adventure began with TMU alumna Noël Grimes, who performed preliminary research on phytosaurs under Dr. McLain’s direction. In Fall 2018, they presented their findings at the Geological Society of America Conference. “We had some of the world experts in phytosaurs there,” McLain says, “and they liked the research.”

Noël Grimes has since moved on to pursue a PhD, and other students have stepped up to continue her work, including Charles Frederico, Sadie Ascanio, and Mychaela Ellsworth.

“The plan with this research is to write up an article and get it published in a journal,” says Dr. McLain.

Why would these students, already busy with their normal courses and responsibilities, be volunteering to travel to museums and crunch data in their meager spare time? For Mychaela Ellsworth, a Teacher Ed major, it’s been a matter of pursing a newfound interest: “When I was a sophomore at TMU, I took Biology of Dinosaurs and discovered that I have a love for paleontology and geology.” She also hopes that by understanding science better herself, she’ll be better prepared to teach her future students.

Joseph, too, has his future students in mind: “If I’m going to be a high school teacher someday, I want to have a well-rounded view of what the scientific community looks like.”

But beyond simply gaining experience in scientific research, Joseph has relished the opportunity to think through how to approach science as a Christian. “We’ve been reading a book by Todd Wood, who’s the director of Core Academy of Science. He shares these ideas of how we as believers tackle these hard questions about science. It’s something that I’m actually really passionate about, because I want to teach in a public school, where I’ll have to interact with an evolutionary textbook. So I need to know how I stand on those hard questions.”

According to Dr. McLain, developing that wisdom is what the Department of Biological and Physical Sciences at TMU is all about. “Some of our students want to go on to secular graduate school. Some of them want to work in museums or labs where they’ve got to be wise as serpents and pure as doves. We want to help them do that.”

Though much of this process happens in the classrooms and the labs, Joseph observed that this research project has given him a huge opportunity to learn from Dr. McLain as a person. “Not only do we get to soak in his knowledge and his career advice, but we also get to watch how his relationship with the Lord impacts his work. That’s an example to me and Mychaela as we spend time with him and research with him.”

In Joseph’s mind, interacting closely with professors is one of the best things about the school. “There’s such a privilege in being able to shadow someone and spend a lot of time with them . . . That’s something really awesome about Master’s.”

With the help of the research grant, the team plans to visit out-of-state museums in order to study more specimens. They hope that their research will do its part to make sense of a controversial group of fossils. And Dr. McLain believes that this will ultimately help contribute to our understanding of origins as a whole.

“Many times,” he says, “we want to go out there and solve all the big problems right away. But one of the best things we can do is get in and investigate one thing really well, so that we understand it, because we need that piece to the overall puzzle.” Good answers to the big questions begin with good answers to the small ones. For their part, Dr. McLain and his research team want to produce the best research they can to the glory of God.

If you are interested in studying the history and natural processes of Earth at TMU, then apply now to our Geoscience major. If you have further questions about this major, contact Associate Professor Matthew McLain at mmclain@masters.edu.