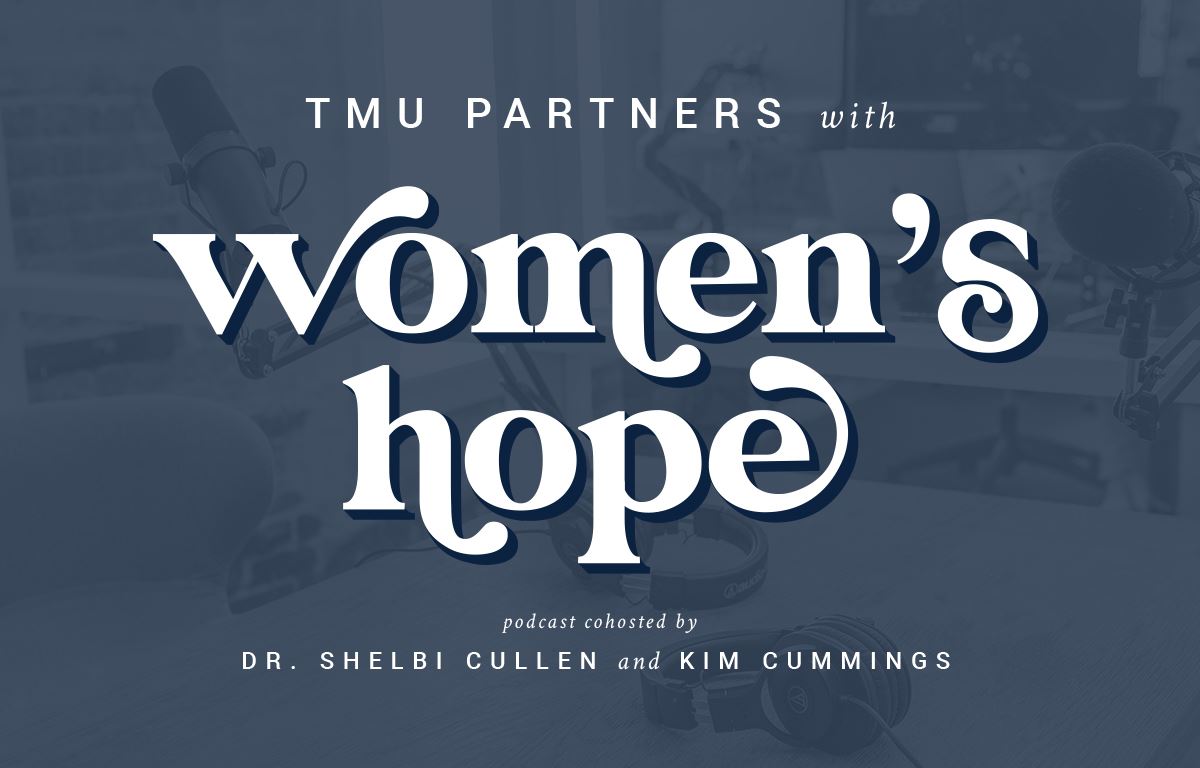 Many have observed that a lot of the resources aimed at Christian women are either subtly unbiblical or hopelessly fluffy. Historically, this problem has extended across many different spheres, from books to Bible studies and conferences. And the podcast world is no exception.

To help combat this, TMU is partnering with the Women’s Hope Podcast, a solidly biblical resource intended to help disciple women through the problems they face as believers. It is cohosted by Kimberly Cummings (a biblical counselor certified by the Association of Certified Biblical Counselors) and Dr. Shelbi Cullen, who is also ACBC-certified and who works as a professor in TMU’s Bible programs.

In 2016, Kimberly (then living in Texas) developed the Women’s Hope Podcast with the help of a friend, Kim Wine. Their goal was to be richly theological as they tackled subjects like marriage, abortion, depression, and anxiety.

They produced nearly a hundred episodes together, interviewing numerous guests and discussing a wide variety of topics. During this time, Kimberly’s husband accepted a job as the senior pastor at Lake Hills Community Church in Castaic, so they moved out to Southern California.

Not long after the move, Kimberly met Dr. Shelbi Cullen by sitting in on her Women Discipling Women class.

A little while later, Kimberly’s cohost began to take on other ministry responsibilities, and she found herself needing another partner. She reached out to ACBC, asking if they knew anyone else ACBC-certified who might be willing to help with a podcast. They just happened to point her to someone she already knew: Dr. Cullen.

“When they asked me, I was like, ‘This is so wild. I already know Kim,’” says Dr. Cullen. And once they started working together, it became clear that they were a great match.

“We’re the same age. We’re in the same season of life, having grown children. We’ve been married the same amount of time—34 years. We’re very similar, but yet, she’s a Southern belle. I’m more Californian, she’s more Southern . . . So we have a lot of fun.”

Like Kimberly, Dr. Cullen has a heart for discipleship, so the podcast’s mission remains unchanged from the original vision.

“Our goal is really to be women who are out there, in this day and age, who are still continuing to invest theologically in other women, helping them to think biblically. And because we’re both trained in biblical counseling, we try to clarify the difference between psychology and biblical counseling . . . We look at what the culture is saying, and then what the Bible says.”

They also prepare their talking points extensively beforehand and try to keep each episode under 30 minutes, which means that their conversations are thoughtful and condensed.

Kimberly and Dr. Cullen have already released their first series together on the topic of biblical discipleship. They are hoping to release series about self-image and Titus 2 in the near future.

We would encourage you to follow Women’s Hope Podcast on Twitter and Instagram, give a listen to some of their previous episodes on Stitcher or Apple Podcasts, and keeping an eye out for future releases.

To access all episodes and to learn more about Dr. Shelbi Cullen and Kimberly Cummings, click here.