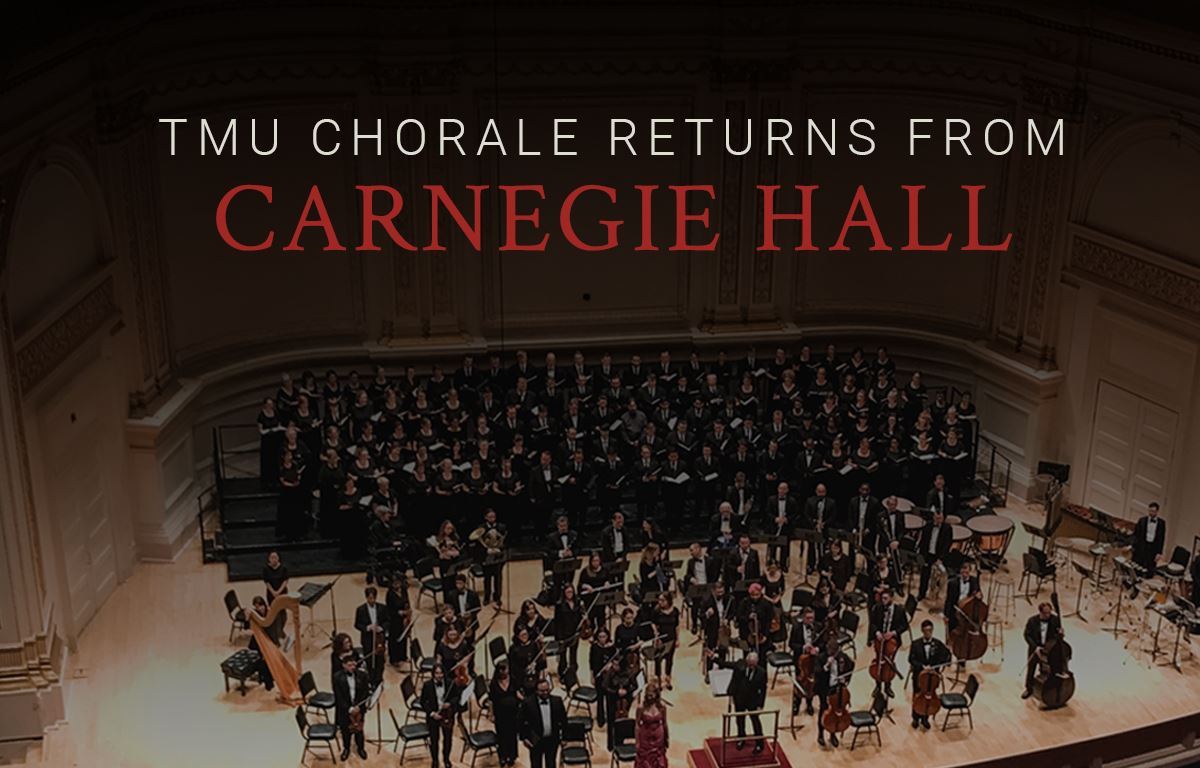 On May 21, an atypical overcast Monday morning, the campus of The Master’s University was begging for some life and activity after nearly two weeks without the hustle and bustle of university students.

The large white bus that pulled up next to the baseball field was an answer to that plea. None too weary, despite their six-hour flight, TMU’s 2017-18 Chorale streamed from the vehicle, gathered their bags, and posed for a final photo. Rather than merely smiling, they sang a final song together: “Unclouded Day”—the song they named their two-week East Coast tour off of.

Departing on May 6—two days after TMU’s commencement exercises—the Chorale went on to perform 15 times across eight states, including performances in 11 churches and the historic Carnegie Hall in New York City, N.Y.

“One of the most amazing things was singing at Carnegie Hall,” said Andrew Montgomery, a TMU senior this fall. “Some people were there simply to celebrate Mother’s Day, and… they got to hear ‘Requiem for the Living,’ which to the audience was just a performance, but to us was a prayer for those who aren’t believers.” (The five-movement “Requiem for the Living” was published in 2013 by Dan Forrest, guest faculty member at TMU.)

This was the third time the Master’s Chorale had sung at Carnegie Hall (’03, ’07, ’18) alongside Carnegie’s own resident orchestra, the New England Philharmonic. Fifteen members of Carnegie’s choir joined the 61-member Chorale and 40 Chorale alumni who flew to New York (from around the country) to sing gospel-centric songs to a nearly packed house on Mother’s Day.

Though this was a highlight for many on the trip, sophomore Madelyn Smith said, “One of the things I appreciated most was that (Dr. Plew and the music faculty) didn’t emphasize the fact that singing there was the trip’s purpose.”

Each year, Chorale uses its tour to reach out and encourage local church bodies and communities in the U.S. and around the world. The Chorale ministers through their music, but much of their ministry happens during the conversations before and after the performances, as well as the interactions each of them have with the families hosting them along the way.
“Carnegie Hall was amazing,” Smith continued. “But, it’s not the same personable aspect of singing at the churches.”

“We sang at my childhood church,” said Dr. Plew, when asked about his tour highlight. Many of his friends and acquaintances attended the concert, including high school and college classmates, the pastor from his teenage years (now a 92-year-old man) and his primary professor from Baptist Bible College of Pennsylvania (now Clarks Summit University).

“All these people from my past came, and it felt like ‘the local boy finally comes home,’” he said wistfully. He and his wife, Pamela, grew up there together.

The choir performed songs like “Upon This Rock,” “The Conversion of Saul,” “Great Is Thy Faithfulness,” “And Can it Be?” (commissioned by TMU in 2013 and arranged by Dan Forrest), “Soon Ah Will Be Done” and 13 more. They sang in churches, the renowned 117-year-old Carnegie Hall and spontaneous places like the Original Krispy Kreme, Lincoln Center, and Washington Monument (the latter of which they got kicked out of). Just as they brought vivacity and life to the silent TMU campus on Monday, they brought the heart of the gospel everywhere they went—musically and relationally.

To learn more about the School of Music, head to our site.