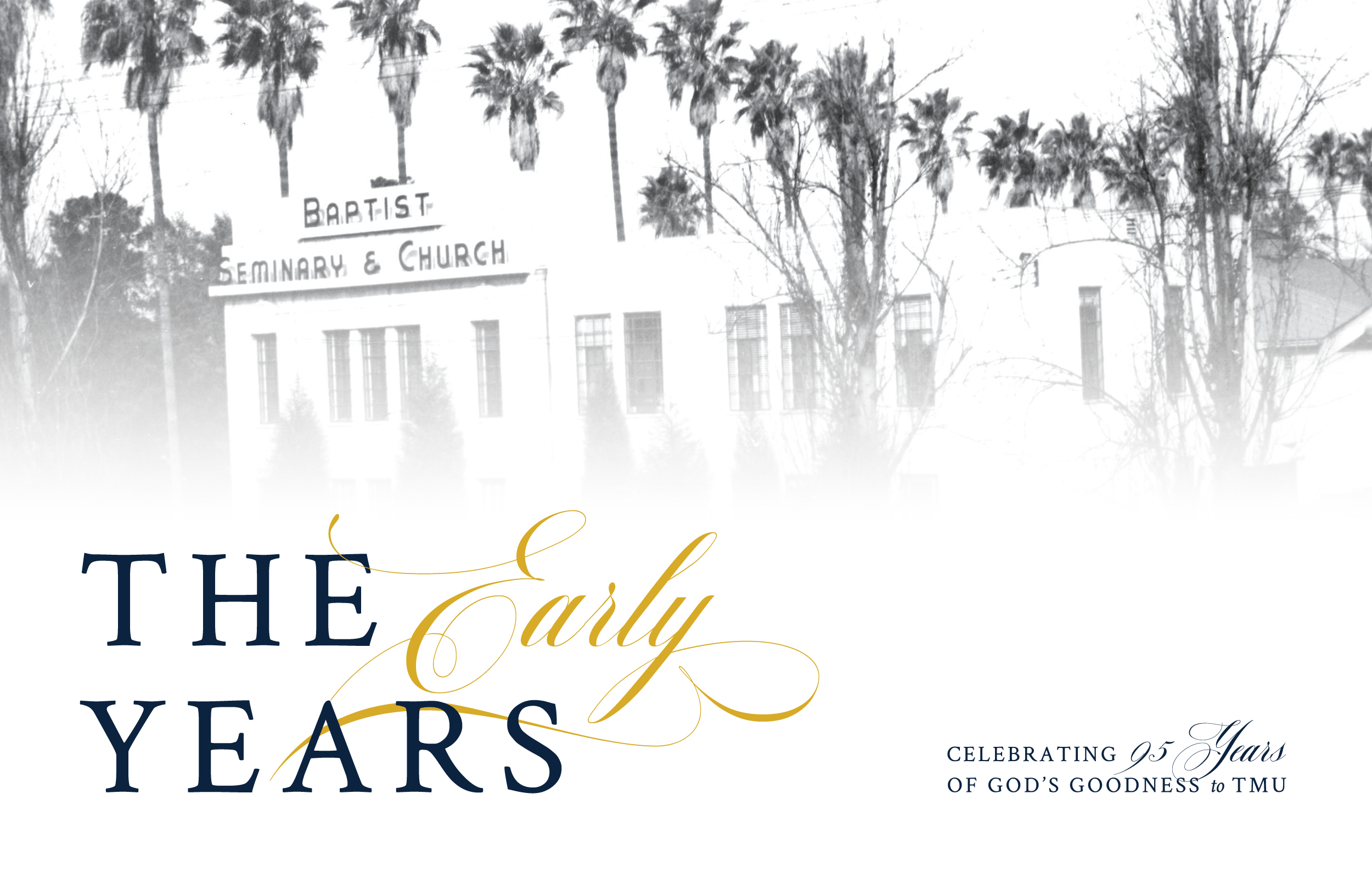 Dr. Carl M. Sweazy was asked to summarize the first 50 years of the institution that would become The Master’s University. He did that in “The First Fifty Years of L.A.B.C. 1927-1977.” Here is Sweazy during the 1958-59 school year.

Editor’s Note: Our institution was founded as Los Angeles Baptist Theological Seminary in 1927. Fifty years later, in 1977, the school wanted to celebrate by rehearsing its history. Of those who were firsthand witnesses to the earliest days of the school, Dr. Carl M. Sweazy (longtime friend and one-time president of the institution) was one of the few still around and able to tell the tale. This he agreed to do, writing “The First Fifty Years of L.A.B.C. 1927-1977.” He started by recounting the background behind the school’s creation:

Sweazy: I must begin with a reference to the religious and spiritual situation existing in Baptist circles at the time of the school’s founding in 1927. For some time, leading Baptist colleges and seminaries had been undergoing subtle but definite changes in philosophy, involving a de-emphasis of some important Bible and Baptist doctrines such as the divine inerrancy of the Bible as the verbally and fully inspired Word of God, the essential unique deity and saviorhood of Jesus Christ, the absolute necessity of the new birth and associated truths.

Many of the more advanced ministers of the denomination had received their training and theological stance from these schools. These men came into positions of power and influence in the denomination and held key spots in determining church literature and policy through the churches of the nation. Liberalizing programs were introduced and liberal leaders in all areas of church life became increasingly prominent. Heated discussions and debates furnished much of the agenda in state conventions and local associations. For several years, an association of fundamental pastors held two- or three-day meetings prior to the stated national conventions. Various strategies were planned, but somehow the liberal forces prevailed in the actions taken.

Editor’s Note: At the Northern Baptist Convention’s annual meeting in 1926, there was a severe doctrinal split. A spiritual revolution followed, sweeping across the churches of the convention from coast to coast, resulting in more than 6,000 pastors and churches eventually withdrawing their membership, according to Sweazy. Baptist colleges and seminaries, however, did not split from the convention, being financially dependent on it. This left the dissenting churches with limited options for training their future pastors and leaders. However, certain men foresaw a solution.

Sweazy: It was during this period of fundamental reconstruction that certain godly pastors of the Los Angeles area anticipated a coming leadership crisis. They were led, as we verily believe, by the Spirit of God, to lay the foundation and begin the ministry of what have become Los Angeles Baptist College and Northwest Baptist Seminary of Tacoma, Washington. (During the school’s accreditation process under the Dunkin administration in the early 1970s, the graduate seminary program was divided from the undergraduate liberal arts program. The former became Northwest Baptist Seminary, and the latter became what is now TMU.) Without doubt the driving force and leader of the small company of dedicated pastors and laymen who founded this school was Dr. William A. Matthews.

Dr. William A. Matthews was the first president of the institution that would later become The Master’s University. He is pictured here in 1930, three years after the opening of the school.

It must be kept in mind that this school began as a theological seminary for the definite purpose of training ministers, missionaries and Christian workers for a fundamental, uncompromising ministry, separate from all traces of apostasy. It was fully dedicated to a divinely inspired Bible and complete loyalty to Jesus Christ as presented in the Scriptures of both the Old and New testaments.

The faculty and first enrollment of students at Los Angeles Baptist Theological Seminary in October 1927.

From the first, monies coming into the school were quite limited, and members of the faculty served practically at their own expense on a faith basis. Service on the part of both faculty and trustees indicate the full measure of devotion and sacrifice, including many hours and sincere effort on the part of all. The few years I served as a trustee and as president of the school gave me a great appreciation of the thousands of man-hours freely given, many times at great personal cost.

The records of our school reveal personal gifts of money and properties, real estate and note cancellations on the part of godly laymen of vision. This is illustrated in the purchase of the site for the seminary building which was later constructed at the corner of Sixth and St. Louis for the sum of $14,000.

In 1942, Los Angeles Baptist Theological Seminary relocated to the corner of Sixth and St. Louis streets in Los Angeles, California. The property was purchased for $14,000.

One personality of great Christian character and business ability worth noting is J.J. Rutherford, who was elected to the board of trustees on March 4, 1940.

Mr. Rutherford, president of a bank in Vista, California, came to the school when it was faced with serious problems, both financial and academic. Financially the school was not able to build on its property because of greatly limited resources. After months of struggle and no doubt largely through the business acumen and influence of Mr. Rutherford and the strong influence of Dr. Matthews, a bank agreed to furnish money for the completion of the seminary building. It was a wonderful victory for the school and a new spirit of hopeful advance was manifest everywhere.

To read more about our heart here at The Master’s University, see this page.