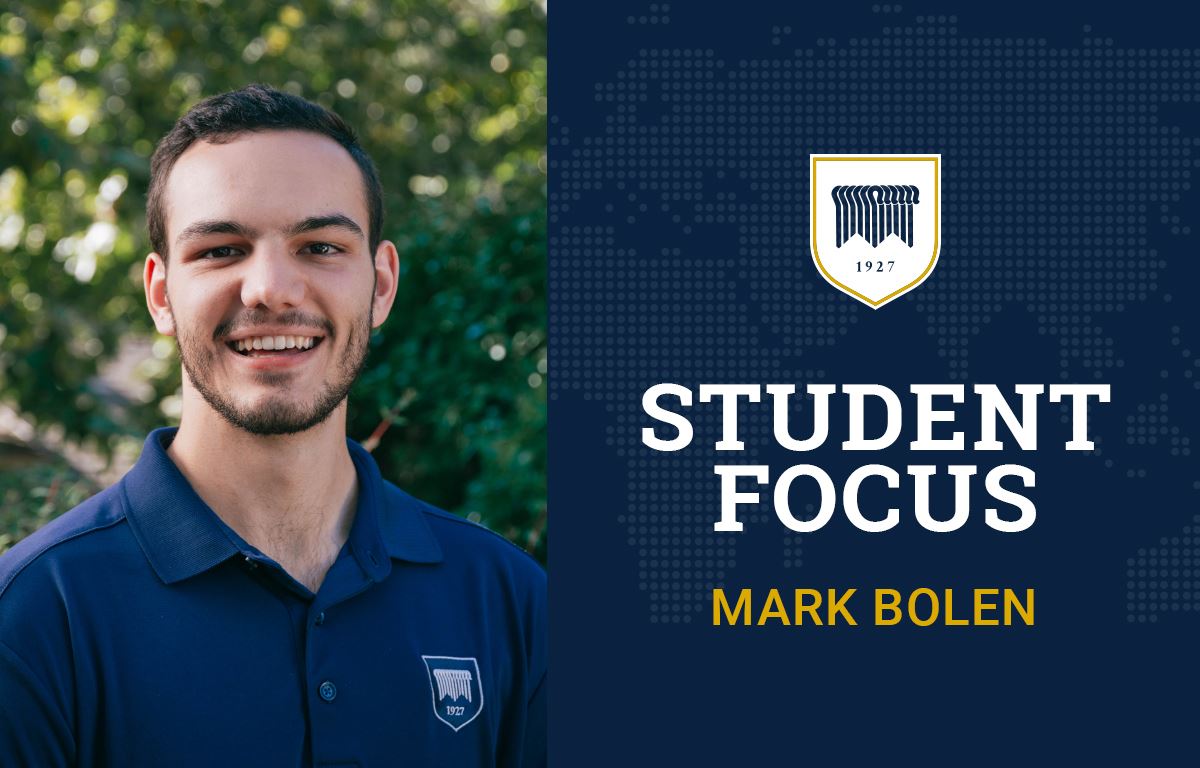 Mark Bolen has long been interested in STEM. Originally, back in high school, he wanted to study engineering—and for a few years, this interest inclined him away from Master’s.

“But,” Mark says, “during my senior year of high school, I kind of got tired of public schools. I had considered going to a public university. I wanted to go to a prestigious school and get a nice degree and a nice job. But then I thought, ‘Am I going to grow in my faith?’ I came to the conclusion that I probably wouldn’t grow as much—I’d probably shrink back, being surrounded by the world all the time, and even by the pressures to do well to glorify myself.”

When he visited Master’s, he saw the sort of Christian community he’d been craving: “I wanted believing friends. I was in public school my whole life, and so I was always surrounded by unbelievers. I never really had great friends or strong friendships . . . When I came here to visit, I saw people in great relationships with each other, and I wanted that.”

Mark decided that he’d rather study computer science at TMU than pursue engineering somewhere else.

While he was a freshman at Master’s, Mark applied for a position with the SMART Program, an acronym which stands for ‘Science Mathematics and Research for Transformation.’ This program selects highly-qualified math, science, engineering, and computer science students, and pairs them with Department of Defense bases around the country.

The application process is rigorous. But for students who are chosen, it means a full scholarship, summer internships, and a guaranteed job after graduation.

The Naval base at Point Mugu took an interest in Mark. They selected him for the scholarship and placed him in their electrical engineering team for his summer internship.

“This internship brings me back to engineering. It’s cool how it all worked out. The Lord has blessed me.”

Mark is grateful for the unique ways in which Master’s has prepared him for his internship and his future job. “The Bible classes have really prepared me for working in a secular environment. I know the Bible, I know theology, I know how to think as a believer . . . The Bible profs are really pastoral, as they want to shepherd us students and help us to be ready for the real world. They know we’re not all going to be working in Christian environments.”

“I love talking to them after class, asking them questions and learning about something in greater detail. That’s been super cool. They’re very willing to talk after class about anything.”

When he started getting to know the other interns at his base, he saw that their experiences with college were vastly different. “They don’t know who their profs are. They’re in giant classes with hundreds of students . . . They barely even know what the prof looks like, because they’re in a big auditorium.”

Meanwhile, Mark has built relationships with several of his professors, including Dr. Chou, Prof. Beals, and Dr. Eickemeyer. (Not to mention his dad, Dr. Bolen.) When he came back to campus after his summer internship, these were the people he went to for advice about how to witness to his unbelieving coworkers.

When he graduates in May, Mark will start his two-year contract at Point Mugu. He says that it’s a friendly and relaxed environment, and he’s looking forward to his work there. As for what happens after, Mark is content to not plan so far ahead.

“I do love learning, so I might want to go back and get a master’s degree, or even go to seminary.” Regardless of what happens, though, it will be built on what he learned at Master’s.

“I wanted a biblical foundation for life. Master’s gave me that and much more.”