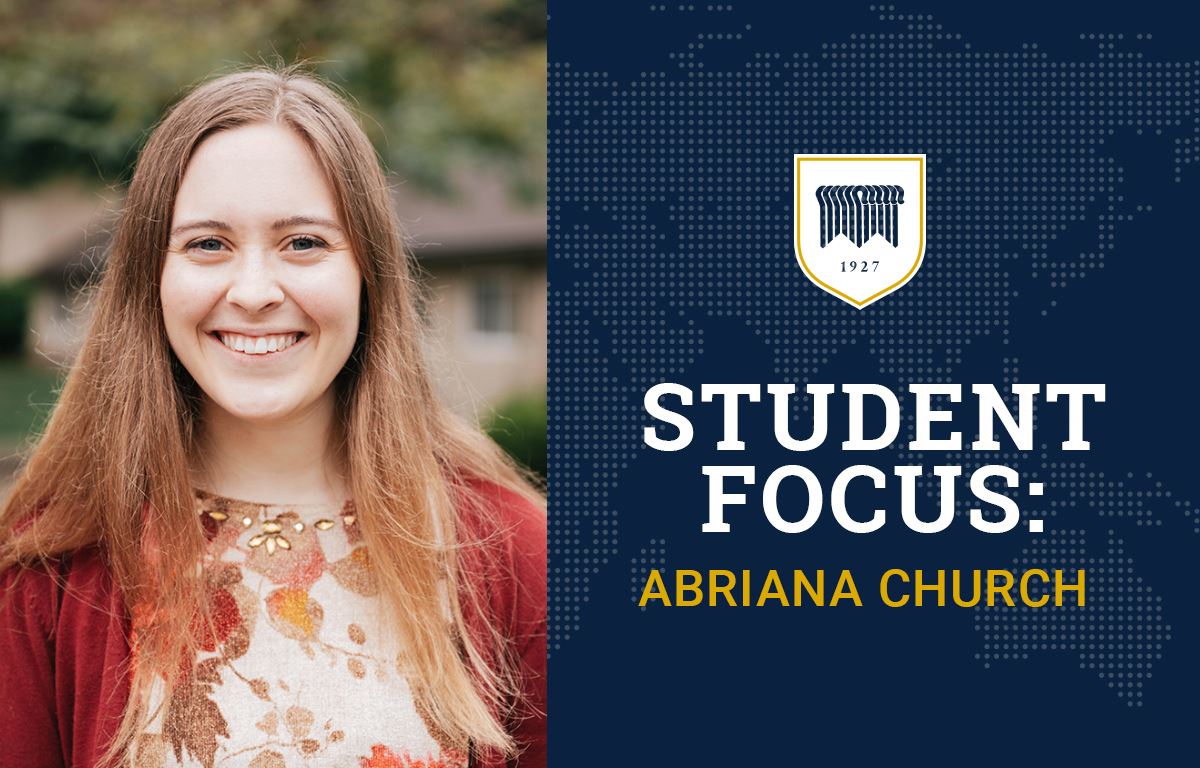 Abriana Church is a sophomore in the Music Department. During the Chorale Concert on February 28th, she performed a section of Prokofiev’s Second Piano Concerto—a notoriously difficult piece. Dr. Plew invited the pianists in the audience to come up front and watch her closely as she played. The look of wonder on their faces spoke just as loudly as Abriana’s music.

For about as long as I can remember, a desire to pursue excellence and Christian servanthood has been my life’s soundtrack. Being the oldest child of a homeschooled family of eight provided constant challenges to be a faithful Christian servant as I learned to help out around the house. This came to include teaching and grading siblings’ schoolwork, making meals, tidying the house, and taking charge in my parents’ absence. Before all this happened, my early childhood was a colorful kaleidoscope of activities such as swim team, ballet, and gymnastics.

Unlike the other interests I took part in at a young age, music (specifically piano) stuck with me all through my childhood and is still a centerpiece in my collegiate studies. By the time I had completed high school, I had acquired six wins in the MTNA Idaho State Competition, third prize in the 2016 MTNA National Competition, and two opportunities to perform with orchestra. With the long-term hope of concertizing as a classical artist, the next step would be higher study at an elite music conservatory.

I stepped into the San Francisco Conservatory of Music in the fall of 2018 under the mentorship of the brilliant yet accommodating Van Cliburn winner, Jon Nakamatsu. But while the conservatory offered tremendous grounds for my growth as a musician, there was a fly in the ointment.

It did not take long for me to discover that this artistic hub in the heart of San Francisco was extremely secular. During my time there as a student, I did not meet a single believer. Furthermore, I was stuck in an English class with a homosexual professor who was more than eager to foster anti-conservative sentiments.

As one would imagine, meeting with believers at church was an immense comfort and joy through this time. Before coming to the conservatory, my pre-college church involvement had been both irregular and doctrinally confusing. One of the factors associated with my family’s sparse church attendance had to do with my parents’ doctrinal differences. My father was raised in and is committed to the doctrinal stance of the Church of Christ, but my mom’s views have been influenced by her sister, a Calvinist.

Since high school, I slowly started to question the Church of Christ doctrine. Now that I was on my own, I sought out a traditional evangelical church. While doctrinal uncertainty still remained, one thing was absolutely clear: now that I was living on my own and fully responsible for my Christian walk, I knew that regular church involvement was essential.

Eventually, I started to consider the idea of transferring. After sensing my spiritual immaturity on a couple of occasions, I had a shuddering thought. I imagined myself in the future as a highly regarded pianist, just as I had always dreamed of being, but I was unstable in my knowledge of Scripture and uncertain in my doctrine. There I was, with a unique platform to reach people with the gospel, yet spiritual incompetence caused me to be swept along by the mad rush of worldly cares.

On the flip side, I couldn’t deny that it had been a rough semester, and I wanted to be absolutely certain that my wish to transfer was based on God’s will rather than a personal desire to back out of a tight place. Eventually, after much prayer, I was convinced that God was, in fact, calling me away from the conservatory. My cousin and childhood best friend told me about her studies at The Master’s University. TMU’s godly principles and mission stood in stark contrast to all I had experienced at the conservatory.

Upon applying, I was thrilled to receive an acceptance letter in the mail. At the time, I fully realized that the education at Master’s would not be as specialized as that of the conservatory, and I would take on much more academic work. Yet, the university would provide the biblical training I needed to walk properly before outsiders. I was determined to work just as hard at TMU as I had at the conservatory.

It is now a little over a year since I came to Master’s. I could not have dreamed of a better place to pursue an education. I will always continue to thank God for this special place where my mission is aligned with that of my school: to do everything to the glory of God the Father by being molded into the likeness of His Son. Here, the work of the students, staff, and faculty takes on new meaning, for we work heartily not in hope of things seen, but things eternal.

When I graduate from The Master’s University, it is most probable that I will pursue a master’s or doctoral degree in piano performance at either another academic institution or a music conservatory. Unless the Lord redirects my life in an unexpected direction, I will eventually both perform and teach, possibly at the collegiate level.

Either way, I will be in constant contact with those who do not know our Lord. There will be countless opportunities to share the gospel and exemplify the Lord Jesus Christ in daily life, to the praise and glory of God the Father. It is my constant prayer that my time at Master’s would be especially integral, renewing my mind and maturing my faith to the end that I may be an effective instrument in the hands of my Redeemer.