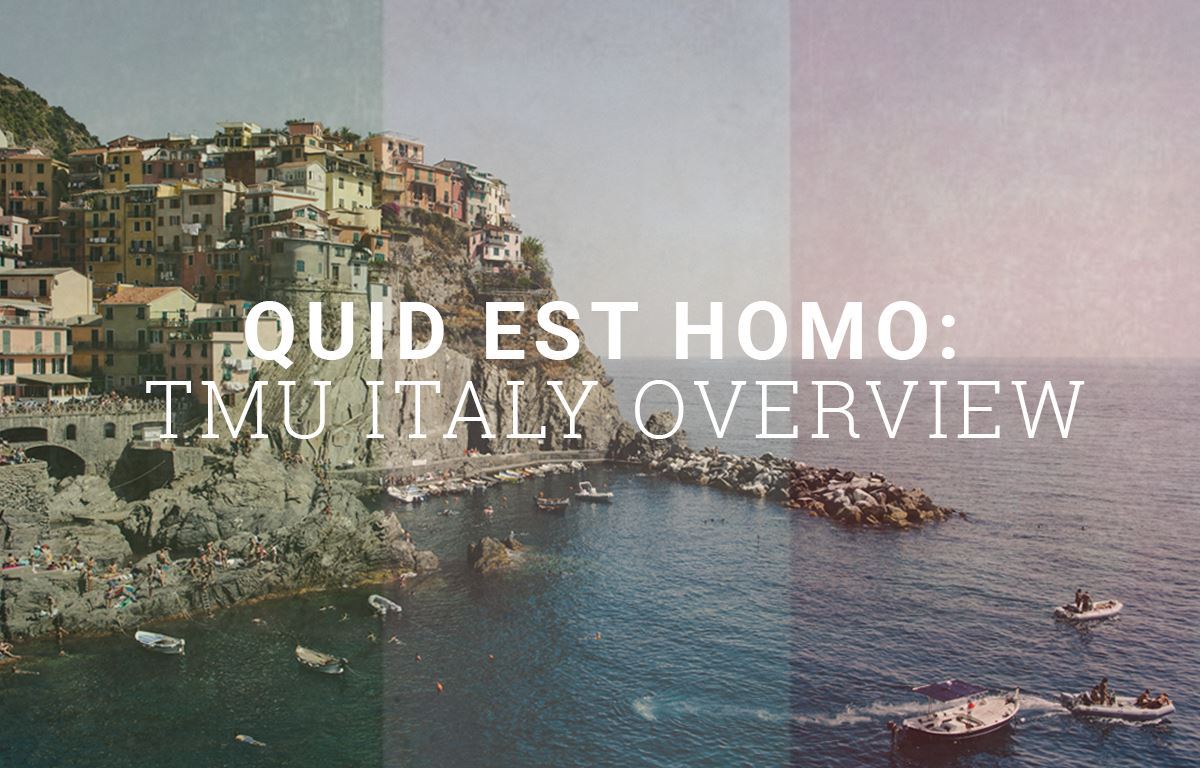 To walk through Florence, look forward at all times. Don’t look behind, or side to side. If you must look somewhere, look up, there is much to see. Look at the buildings, consider how they were built, six hundred years ago, without machines. What is man, “Quid est homo,” that he would undertake such works? “Quid est homo” today in light of these works? Ponder as you look up. If you are in the monstrous Duomo complex, pet the horses. But to walk through Florence, look forward. Keep your eyes focused slightly above the crowd. Don’t make eye contact. To do so would mean collision. Step high, the cobblestones are uneven. Step high; and wear good shoes. Pretty soon, with practice, you will be able to pass through the midst, upstream as a fish, or like Jesus in Luke 4:30.

For six weeks, I and ten other students lived in Italy through an extension program of The Master’s University. The first three weeks, we lived in the Mugello countryside an hour outside Florence in Villa Montazzi, a house built around a medieval look-out tower. A few days before we arrived, Dr. Horner, his wife Joanne, his daughter Rachel, and Professor Chua, arrived and prepared the Villa. We arrived, tired, to an energetic house, dinner ready.

The first night made no sense: the dark dining room, candle-lit for lack of modern lighting, all of us silent because we were stuffing our faces full of food, and we hardly knew each other. This became routine at Villa Montazzi, all of us sitting together, feasting on Joanne’s wonderful cooking. These ten other students, my Frater and my Sorores, would become everything to me in those days: family.

Life around the Villa consisted of hikes around the countryside, swimming in the pool during the heat of the day, congregating in the kitchen as Joanne talked our ears off, sitting in a side room or in the tower doing homework together till the sun went down, and then watching the stars, the stars that Abraham counted; more than Los Angeles can comprehend.

This was education though, not leisure. Every day at the Villa we had classes, mostly humanities. The question for the whole program was “Quid est homo?”: “What is man?” “Everything in this program, whether directly or indirectly, has asked that question,” Dr. Horner said one of the last days. The Calvin class asked it directly, and showed that man is noble, but “perished in the person of Adam.” The Virgil class asked it indirectly as we learned about the duty of man that C.S. Lewis, even before becoming a believer, said moved him to tears as he read about the piety of Aeneas.

Every few days we would go into Florence.

We tripped along the streets, bumping into people, lost except for the thread of Dr. Horner’s leadership that we clung too, afraid of losing our way, devoured by Minos’s bull. The bull was the Duomo; the center of Florence’s influence. Dr. Horner took us past it every day. We were left to ponder the size, the purpose—Quid est homo—of the Duomo. The building screamed “Quid est Homo!” Our hearts responded “Quid est homo!” Dr. Horner never took us in to the Duomo those first three weeks; he was content to see it from the outside.

In the middle of our third week, we left the Florence area and traveled to Rome and Venice.

We spent three days in Rome. One day we spent ten hours in the Vatican; we covered twenty percent of the museum. We saw the Laocoön — one of the most famous ancient statues of a man and his sons being devoured by snakes. One day we spent eight hours in the Roman forum. Goethe, a German Romantic writer, said Rome was overrated, I said Goethe was wrong. Both the forum and the Vatican made us ask “Quid est homo?”

Man has made beautiful things, like the sculptures in the Vatican. Man is also fallen, and death and time affect everything, as shown by the forum, once beautiful and grand, now ruined.

Next, we spent one week in Venice. The question on our minds, spurred by Dr. Horner’s history, was why would man look at the marshes sitting on the Adriatic in Northern Italy and think, “That looks like a good place to build a city.” What is man that he would build Venice, sinking still? What is Lord Byron, that he would jump out of his window into the Grand Canal, and swim up to Shelley’s apartment, because he couldn’t get ahold of him? When in Venice…

After Venice, we returned to Florence. We lived in the city, in four separate apartments. This was the start of the fifth week. “It feels like we’ve been here forever,” Emma said. “And by the time we leave, it will feel like it went so fast.” She said this on the third day.

By day twenty-nine the days dragged on. I missed America, I missed air-conditioning. Florence withstood the hottest heat wave since the eighties that first week we were back in town. Evan Rogers, the other guy on the trip with me, and I were on the top floor of an apartment complex. All day long the sun would shine on our apartment making it unbearable. We took refuge outside during the day, and slept blanket-less with a fan blowing on each of us, windows open. Often Evan and I would get dinner with Dr. and Mrs. Horner. We reminisced about the villa, now half-remembered. Moving from place to place made the program episodic. The villa episode over, the Rome episode too short, the Venice episode lofty — all distinct memories. We were all family now. We had grown together. We were different people. We looked at the villa days with fondness and shared that memory. Even then we longed for past days, away from the heat, when we were all together in the same house. We still feel this, but how much more back in the states?

I thought then “What makes Italy different than California, New York, the Midwest, Israel, Germany?”

I remembered stepping out of the plane the first day, seeing the Tuscan hills, and thinking how much they looked like the hills of Burbank. I watched the egrets, the same bird in every pond in America, fly over the Arno. I ate gelato, and though it is unquestionably better, it’s still ice-cream, it is nothing novel.

What then makes Italy different? “It’s the history.” I told Dr. Horner that last day of class. I can’t answer what man is, but I know what he does. Man builds cities, small ones like Florence, dense with history. Man establishes banks; the Medici rise to power. The duke stabs Lorenzo Medici in the neck. Lorenzo survives and throws the duke off the Palazzo Vecchio. Savonarola is burned alive in the Square. Art, Architecture, Sculpture, and Poetry is revived. David is carved out of rock. The largest building in the 1400s is built.

Men stand on top today and still ask the question, “Quid est homo?” All this happened in a little valley in the Tuscan countryside, in a city you can walk through in twenty minutes. The question remains unanswered. King David himself asked God the same question: “What is man that you are mindful of him?”

The beautiful part of an unanswered question is spending a lifetime answering it.

That is where all of us are because of this program. We are still asking questions, still growing like a tree, lifelong learners. On all of Dr. Horner’s emails is a quote by Alcuin: “O how sweet was life when we sat quietly among the shrines of wisdom, among the abundance of books, among the venerable wisdom of the Fathers.”

Emma was right however, the days went by too fast. We spent the last night walking around Florence. We went to an overlook and watched the sunset. We ate gelato one last time. We said our tearful goodbyes to our new family and like Odysseus set off- air-conditioning at last!—on our joyous returns.