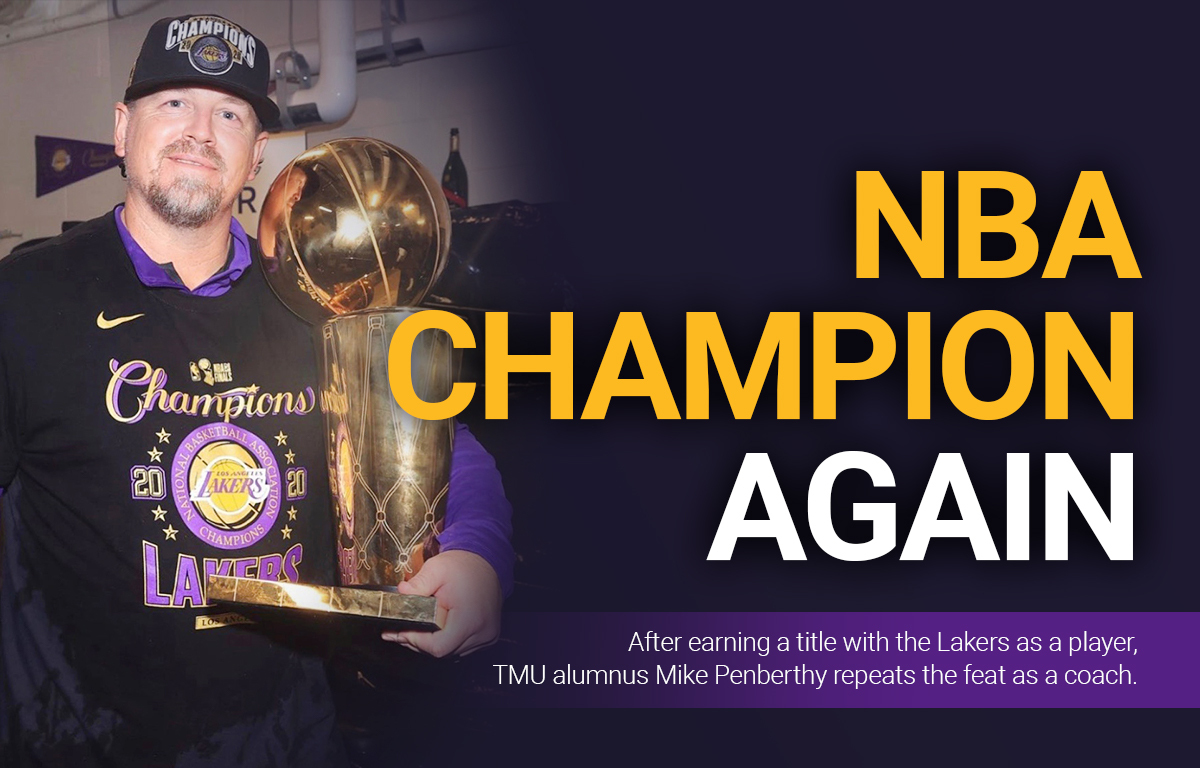 Back when he was a 21-year-old All-American at The Master’s College, Mike Penberthy never could have imagined winning two NBA championships with the Los Angeles Lakers — one as a player in 2001 and the other, earlier this month, as an assistant coach for a team headlined by LeBron James, one of the greatest players in basketball history.

Without a doubt, he couldn’t have envisioned the most recent title unfolding like this, sequestered inside the NBA’s “bubble” at the Walt Disney World Resort in Orlando, Fla., for more than 90 days as a precaution against the coronavirus.

Nevertheless, Penberthy was on the sideline as the Lakers navigated a restart of the NBA season after the March shutdown. Los Angeles advanced through three rounds of the Western Conference Playoffs in August and September before vanquishing the Miami Heat in Game 6 of the NBA Finals this month.

The irony of the situation was not lost on Penberthy. He had signed a multiyear contract with the Lakers before the season, in part, because it would allow him to remain close to his wife, Wendy, and their three teenage children in Santa Clarita, Calif.

Instead, he spent the last three months on the other side of the country, contributing to the Lakers’ offensive strategy and play calls, tracking the team’s offensive efficiency, and helping star forward Anthony Davis capitalize on otherworldly talent.

Penberthy didn’t enjoy being so far from home. But he and his family had learned how to manage extended time apart while Penberthy established himself as an in-demand NBA coach, first with the Minnesota Timberwolves and then with the New Orleans Pelicans.

The bigger challenge inside the bubble, Penberthy says, was maintaining energy and enthusiasm as one day blended into another. There was little to no variety in the schedule and practically no days off.

As seen on Backstage: Lakers on Spectrum SportsNet

Under normal circumstances, playoff series include travel days as teams shuttle back and forth between home arenas, creating two-day gaps between select games. This year, with everyone sheltering in Orlando, games took place every other day. If you weren’t playing, you were in full preparation mode.

On game days, Penberthy attended a coaches meeting at 9 a.m. He started practice two hours later and then sat down for lunch around noon. After a nap, he caught a bus to one of three arenas at the ESPN Wide World of Sports Complex for that night’s contest — played without fans in attendance.

On days without games, Penberthy woke early to play golf (“It was a lifesaver for so many coaches and players because you can only go to the pool so many times,” he says). Then he’d eat breakfast and watch film of the previous night’s game for the second time (he generally watched the video footage for the first time immediately after a game’s conclusion). Feeling prepared, he organized his notes and hustled to a coaches meeting in the early afternoon.

Players joined the coaches for film at 2, and by 3:30, they all assembled inside a gym for a walk-through practice.

Penberthy napped around 5. Dinner was at 8. Then the Lakers watched other teams compete until midnight, before going to bed.

It all became mentally taxing. “You’re going through the same, you know, routine, same room, same food, same, you know, hallway you’re walking down,” Penberthy says. “You’re seeing the same people, too. So you have to keep that camaraderie, unity, chemistry, culture, while being in a place that doesn’t change.”

The Lakers combatted malaise with a simple mantra: “Beat the Bubble.” This, Penberthy says, was an everyday battle conducted by enjoying simple pleasures like a round of golf, a joke or a cone of soft-serve ice cream. The point was to “make you laugh and talk,” Penberthy says.

Penberthy also leaned on his faith in Christ. He established Bible reading and prayer as regular parts of his routine. This allowed him to fight for joy when he wasn’t necessarily feeling joyful and to be at peace even after a loss (the Lakers lost five times in the playoffs) or when the team simply didn’t play well.

Those characteristics were essential to maintaining his witness for Christ in the bubble, where he was around his colleagues almost 24/7. “When you’re around your coaching staff that much and the players that much, who you really are comes out,” he says. “So I wanted my faith to just be part of who I was.”

Penberthy said he never felt nervous during the NBA Finals. He says the Lakers made 47 defensive mistakes against the Heat in a Game 3 loss and 62 defensive mistakes when Miami won again in Game 5. “We felt like we lost those games. We didn’t feel like Miami won,” he says.

That’s not to say there wasn’t pressure.

Sometimes during timeouts in crucial moments, Penberthy would pull a Lakers player aside and flash a smile. “Isn’t this fun?” Penberthy would say. Often the player laughed and smiled back.

The purpose of the gesture was to relieve tension, but it also served as a nod to legendary Master’s men’s basketball coach Bill Oates.

Penberthy, who played for Oates from 1993 to 1997, remembers the way Oates relished big games when the Mustangs’ season was on the line.

“If we lost, the season was over. And Bill would say, ‘Guys, isn’t this fun?’” Penberthy recalls. “And, you know, I used that. That’s what I took from Bill.”

Under Oates’ guidance, Penberthy became TMU’s all-time leading scorer and an NBA prospect. “Oates realized what he had and took the leash off and Mike thrived,” Don Gilmore, a longtime sports information staffer at Master’s, told The Signal newspaper in 2016.

Even so, after Oates passed away earlier this year, Penberthy found himself thinking more about the spiritual impact his college coach had.

“He prayed with me often,” Penberthy wrote on Instagram. “He always pushed me towards, as he would say, a ‘simple walk with God every day.’”

Oates certainly would have been proud of what Penberthy helped the Lakers accomplish in 2020.

The championship — the Lakers’ 17th, tying the Boston Celtics for the most ever — wasn’t anything new for the organization. But the celebration following Game 6 was — like most things during an unprecedented season — unique.

The team’s all-stars didn’t run off to outside events like they had in 2001 when Penberthy won a title with the Lakers as a player. This time, there was nowhere to go. Instead, Laker players and coaches lingered in the locker room for an hour; returned to the hotel to shower; had dinner together; then lounged outside talking until roughly 5 a.m.

“That made it more intimate in that regard,” Penberthy says.

But as the Lakers basked in the glory of the organization’s first championship in a decade, Penberthy says everyone was focused on one thing: going home.

“It was one of those moments, like, ‘Let’s get out of this place,’” Penberthy says, laughing.

The feeling was shared back in Santa Clarita, where his family began celebrating after the Lakers built a commanding lead in the first half of Game 6.

“We enjoyed watching the postgame celebrations and kept finding Mike as the camera moved around,” Wendy says of spotting her husband beside LeBron James during the trophy presentation. “We were mostly excited that he was coming home finally!”

After nearly 100 days in the bubble, the much-anticipated family reunion took place Oct. 12. Wendy and the kids had a bet going to see who could predict which restaurant, unattainable for months, Penberthy would want to visit first.

As for the future, Penberthy is set to return to the Lakers next season, which likely won’t begin until at least January. He believes the team can be even better than it was this year.

In other words, it’s far easier now than it was back when Penberthy was a 21-year-old at Master’s to envision himself winning a title with the Lakers.