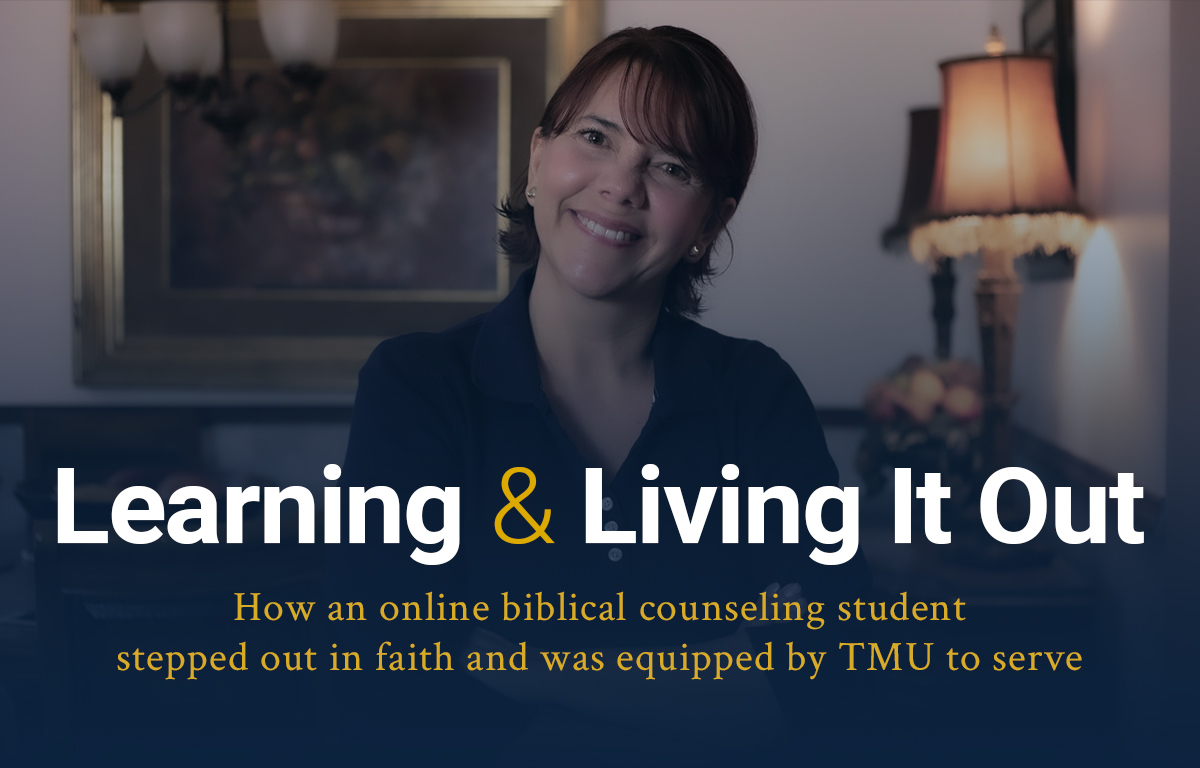 Yasmith Ordonez admits she had doubts about going back to school.

She wondered if the timing was right. It had been nine years since she moved from her native Colombia to Florida. And nearly 14 years had passed since she’d last enrolled in a formal bachelor’s program. She was approaching her 30th wedding anniversary.

Yasmith also questioned whether her health would allow it. She had conditions that caused frequent pain and made sleeping difficult. What if she couldn’t push through all the way to graduation?

Still, she felt a definite tug. After immigrating to the United States, Yasmith became more active in supporting her church. She wanted to help women grow in their relationships with Christ. But she wanted to know she was doing so responsibly, in accordance with Scripture.

She felt she needed training. But that’s when her most-pressing doubt surfaced. Would she be able to keep up with an online program like the bachelor’s degree in biblical counseling at The Master’s University? She says her English was “intermediate” at best.

Ultimately, she took a step of faith. “My desire to become a biblical counselor was bigger than my fears,” she says.

What followed was a picture of perseverance and God’s faithfulness. Yasmith enrolled at TMU where she studied conflict resolution, marriage counseling, and elementary Greek. She learned to trust the sufficiency of God’s Word to meet the needs of everyday life. And when she didn’t digest the information immediately, she went over the material again until it stuck. Professors and family members cheered her on.

After four years, Yasmith graduated from TMU in May 2020 with a bachelor’s in biblical counseling. The accomplishment has supercharged her ministry. She regularly meets with women for discipleship, and she partners with her husband, Jose, a pastor and comedian, to answer crucial questions for thousands of viewers on the couple’s YouTube channel.

“We recently announced to people who know us in Colombia that the ministry of Jose Ordonez, the comedian and pastor, will no longer be,” says Jose, who built a considerable following as a comic in Colombia. “Now, we are the ministry of ‘Los Ordonez.’ I’m happy to see how my wife is helping women and couples who need advice grounded in the Word of God.”

Biblical Counseling is one of five undergraduate degrees offered by TMU Online. The goal is to provide students like Yasmith with the same education – grounded in Scripture – that the institution supplies on-campus.

For Yasmith, learning in English instead of Spanish was a significant challenge – but hardly the stiffest roadblock she has faced in life.

Her father died when she was young, and money was scarce in a family with seven children. After she married Jose, the couple’s early years together were rocky. They had money problems, and they often disagreed on how to parent their four children. After seven years, they temporarily separated.

It wasn’t until Jose rededicated his life to the Lord that things finally began to change. He invited Yasmith to church, and in 1997 she gave her life to Christ.

As a new Christian and young mother, Yasmith focused on raising her children. It wasn’t until after the family moved to Miami – where Jose accepted a position at a radio station – that Yasmith took on ministry outside the home.

Yasmith began meeting with women and offering them advice based mostly on her own experiences. However, she remembers one incident that convinced her to pursue formal training as a biblical counselor.

She’d been traveling alone, and during a layover, she saw a woman screaming insults at her husband and shoving him because he’d momentarily lost sight of their child. Afterward, the woman appeared to be proud of her behavior.

“That situation moved me,” Yasmith says. “I went to the bathroom and started crying. I did not understand what was happening to me, but I felt a burden for women like her — women who are wrong, away from God and who destroy families with their actions. That day I asked God to give me the opportunity to do something for them, to use me as a tool so He could transform lives.” 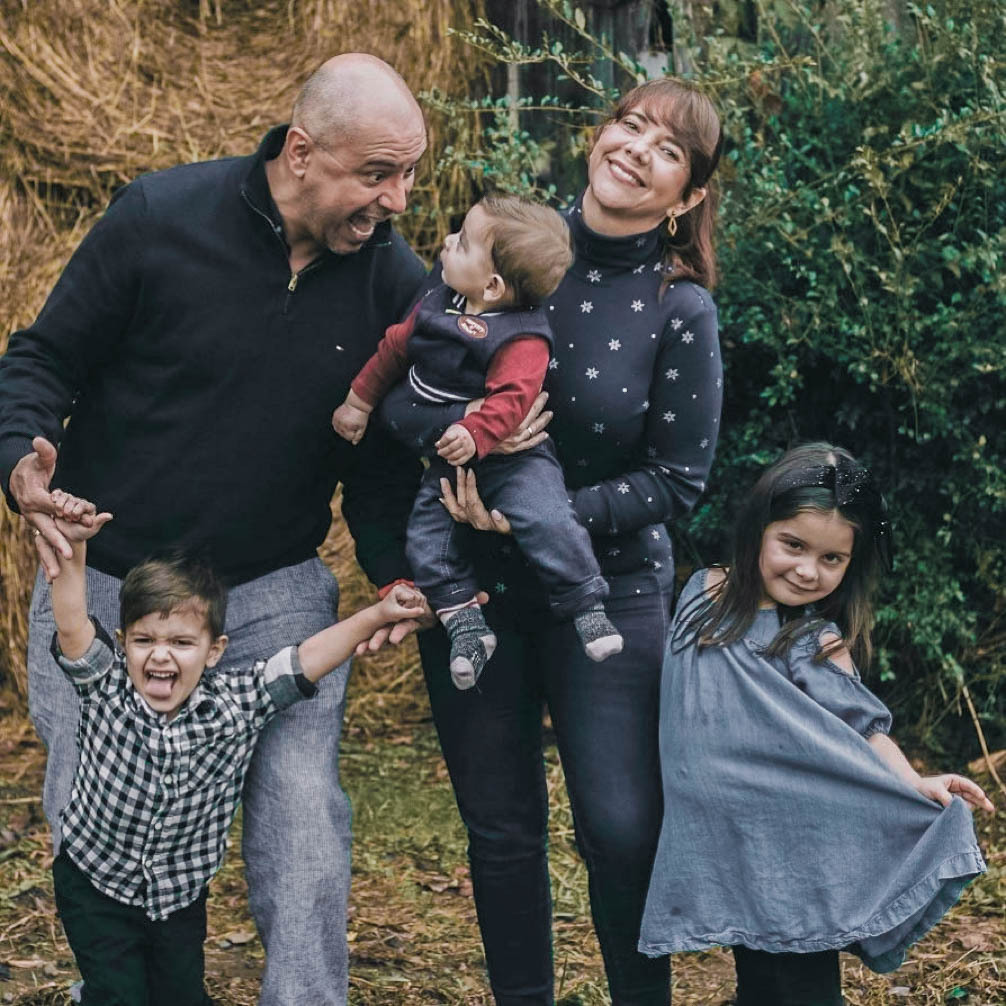 Yasmith and her husband, Jose, play with three of their four grandchildren.

Ultimately, Yasmith decided The Master’s University — which she had heard about in a video advertisement — would be an ideal place to train. But because she wasn’t fully confident in her English, and because TMU was in Southern California, she felt an online program was best.

She enrolled in TMU’s biblical counseling program in October 2016.

Yasmith’s initial doubts were not completely unfounded. In addition to health issues, she says navigating coursework in English was her biggest challenge. She sometimes had to listen to lectures more than once and repeat reading assignments.

At times, she felt exhausted. But there was always help.

“Even though my writing had grammatical errors, I always found support from professors and peers,” she says. “I never felt belittled for not managing the language well. On the contrary, the professors were patient and corrected me with love. I definitely improved my English in the process.”

She also received encouragement from her family. “They were key pieces who inspired me to move forward and filled me with confidence,” she says.

Along the way, Yasmith studied methods of biblical change; she analyzed and critiqued psychology; and she learned about the theological basis for counseling. She says her favorite class was Introduction to Biblical Counseling. She says the course helped her understand that biblical counseling needed to be exactly that — biblical.

“My philosophy now is that God must become our main refuge, strength and hope,” she says. “It does not matter how big the problem is because God is bigger. There are no secret formulas, no hidden ways. The Word of God is clear, and His grace opens our eyes.”

Through one of the course’s assignments — a personal improvement project — she also realized that her studies weren’t only about helping others.

“This task confronted me with my sin and allowed me to do a self-evaluation of my actions,” says Yasmith, who believes she grew more spiritually during four years of online learning than in her previous 20 as a Christian. “I learned that first, we need to put the gospel into practice in our own lives, and then we will be ready for God to use us with others.”

Yasmith graduated in May 2020, but she was just getting started.

These days, she meets with women weekly — in most cases virtually, due to the pandemic. She’s currently helping women from her church, a woman who lives in Australia, and a handful of married couples (Jose meets with the husband, and Yasmith the wife). Often, Jose and Yasmith receive requests from desperate people looking for comfort. The couple addresses the most relevant questions in Spanish on a YouTube livestream. 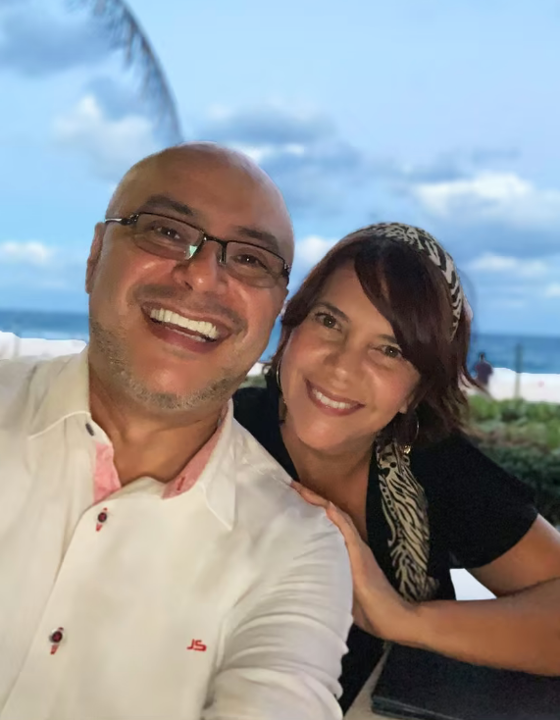 “We ask God that He be the one who reigns and that He fill us with wisdom to help restore many lives,” Yasmith says.

During a July 2020 broadcast, Jose cheered and clapped, encouraging Yasmith to show her TMU diploma on camera. Yasmith shyly obliged.

“Without a doubt, studying at The Master’s University has been one of my wife’s best decisions,” Jose says. “We live in a world where some counselors and preachers open their mouths and say any kind of atrocities. But my wife decided to prepare in a place where the Word of God was the basis, and this made the difference.”

Due to health complications, Yasmith was not able to attend TMU’s graduation ceremony in August. But she hopes to do so this year. She also wants to complete the Association of Certified Biblical Counselors program, a process she began during her time with TMU.

“I believe we should never stop preparing because if we want God to use us in His work, then we must be willing to prepare the ground, pay the price and trust fully that He will complete the work in us,” she says.