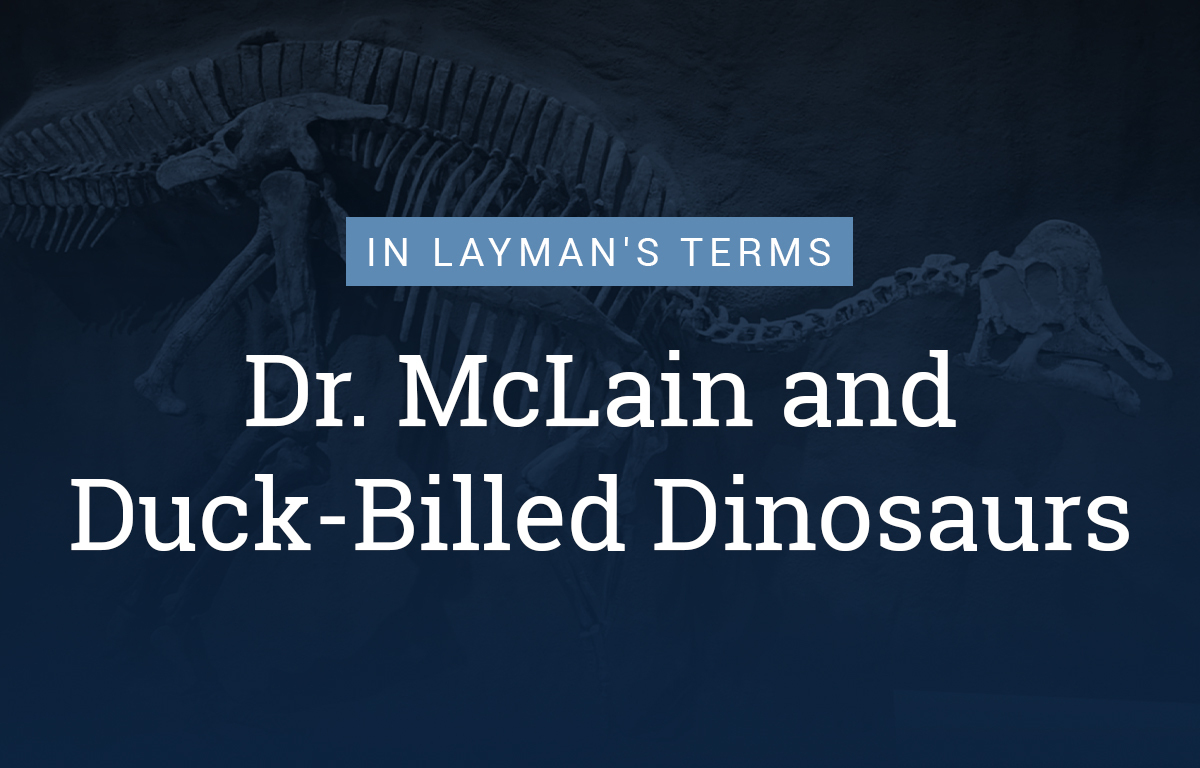 For most of us, the closest exposure we’ve had to so-called “duck-billed dinosaurs” came from Ducky in “The Land Before Time.” But for Dr. Matthew McLain, TMU’s Geoscience professor, and a group of other paleontologists, these dinosaurs have been at the center of a 20-year project.

In May, an open-access scientific journal called PLOS finally published the results of this project.

The article’s title itself is a mouthful: “Over 13,000 elements from a single bonebed help elucidate disarticulation and transport of an Edmontosaurus thanatocoenosis.” But McLain’s explanation of their research not only helps us understand the remarkable complexity of paleontology, but also allows us to better appreciate God’s creation and the unique calling given to Christian scientists.

Almost every June for the past several years, McLain has traveled to a cattle ranch in Wyoming, where he has helped dig up a wealth of bones — mostly the bones of Edmontosaurus, a species of duck-billed dinosaur.

“They’ve been digging out there for over 20 years, and that’s why they have over 13,000 bones of Edmontosaurus, along with bones from other animals. They’ve got tons and tons of bones,” McLain says. “And this is the paper they have been trying to get out for the past 20 years. So, I was really pleased to be part of it.”

Their goal with this paper was to describe the site’s taphonomy. McLain explains: “Taphonomy is the science of everything that happens to an animal or plant from the moment it dies to the moment you find it as a fossil. It’s essentially like paleontology forensics, or paleo-CSI.”

What they found particularly interesting, and what they ultimately focused on in their paper, is what they learned about how Edmontosaurus decays and settles in the context of a bonebed. To understand this, though, we have to understand something about Voorhies groups.

“In the ’60s, a man named Voorhies took sheep and coyote carcasses, threw them in a river, and watched what happened,” McLain says. “He learned that different bones were transported at different speeds. So, initially, the water might flow and carry away some finger bones and a scapula. But things like the skull, and the jaw, and the femur will stay behind.”

Using these observations, Voorhies sorted bones into “Voorhies groups” based on how easily they were swept away by the river, and he suggested that these groups would probably apply to animals in the fossil record. But other paleontologists, like McLain, have been skeptical.

“The groups work really well if you’re talking about sheep and coyotes, but when you’re talking about a dinosaur that’s 30 feet long, what do they look like? That’s what everyone’s been wondering. And one of the cool things in this paper is that we have so much data that we can start to answer those questions.”

As recently as a few decades ago, paleontologists wouldn’t have been asking these kinds of questions. Skulls and other impressive, intact bones were just about the only things collected from sites.

“The way people used to think about paleontology is, ‘Oh, a bone is broken in half — isn’t that a shame? We’ve lost information.’ But what other scientists started saying is, ‘That’s true, you have lost information. But you’ve also gained information.’ Because now you’re learning something about how this bone breaks,” McLain says. “You’re learning something about why it broke. You start asking questions like, ‘Is this a break that occurred during life? Was it after death and before fossilization? Or was it after fossilization?’ You’re gaining different kinds of information.”

Most people think of paleontology as insights into life in the past, but it is also an account of death in the past. This approach is what makes studies like McLain’s possible. Because of taphonomy, they can now start asking and answering questions about how fossilization works — not just in one specific bonebed, but across bonebeds in general.

“We were able to compare what we found to all these different bonebeds in North America and Asia, and we saw that there are actually a lot of similarities between these different bonebeds, and that’s telling us that similar processes were involved in making them,” McLain says. “It’s not like over in Canada they’ve got their own thing, and we’ve got our own thing; there are very similar signatures across big areas. And that is not necessarily something you might predict from a conventional interpretation.”

That said, observations like these — that might lend themselves to apologetics — weren’t what the group set out to make through this study. In fact, McLain doesn’t primarily see his work as a paleontologist through the lens of apologetics.

“In my realm, people always think, ‘Oh, it’s just about the creation-evolution debate. You’re just trying to prove evolution wrong.’ But we’re doing so much more than that,” McLain says. “We’d still be doing these things regardless of what the culture thought about them because it shows us how God designed. As Kepler said, we get to think God’s thoughts after Him. That’s really what you’re doing; you’re getting that deep appreciation for who He is.”

Science, first and foremost, is an opportunity to worship as we see God’s glory in creation. And McLain is privileged to help train the next generation of scientists who will continue the work.

“We’re not anti-science here (at TMU). We’re also not anti-dinosaur,” McLain says. “You hear some weird stuff from people outside Master’s, like, ‘Oh, they don’t believe in dinosaurs.’ And Christians sometimes get confused about these topics.”

“That’s part of what we want to do here: educate people to think rightly about these things, and to see that not only is science not a threat to their faith, but it’s actually an endeavor Christians should be involved in.”

Because of this, McLain and the other faculty in TMU’s Biological and Physical Sciences Department are committed to furthering research in their fields — not only to defend their faith, but also to enjoy the God they have faith in by examining what He has made. And sometimes, that means answering questions about how duck-billed dinosaurs decompose.

Dr. Matthew McLain is a member of the Geological Society of America and the Society of Vertebrate Paleontology.