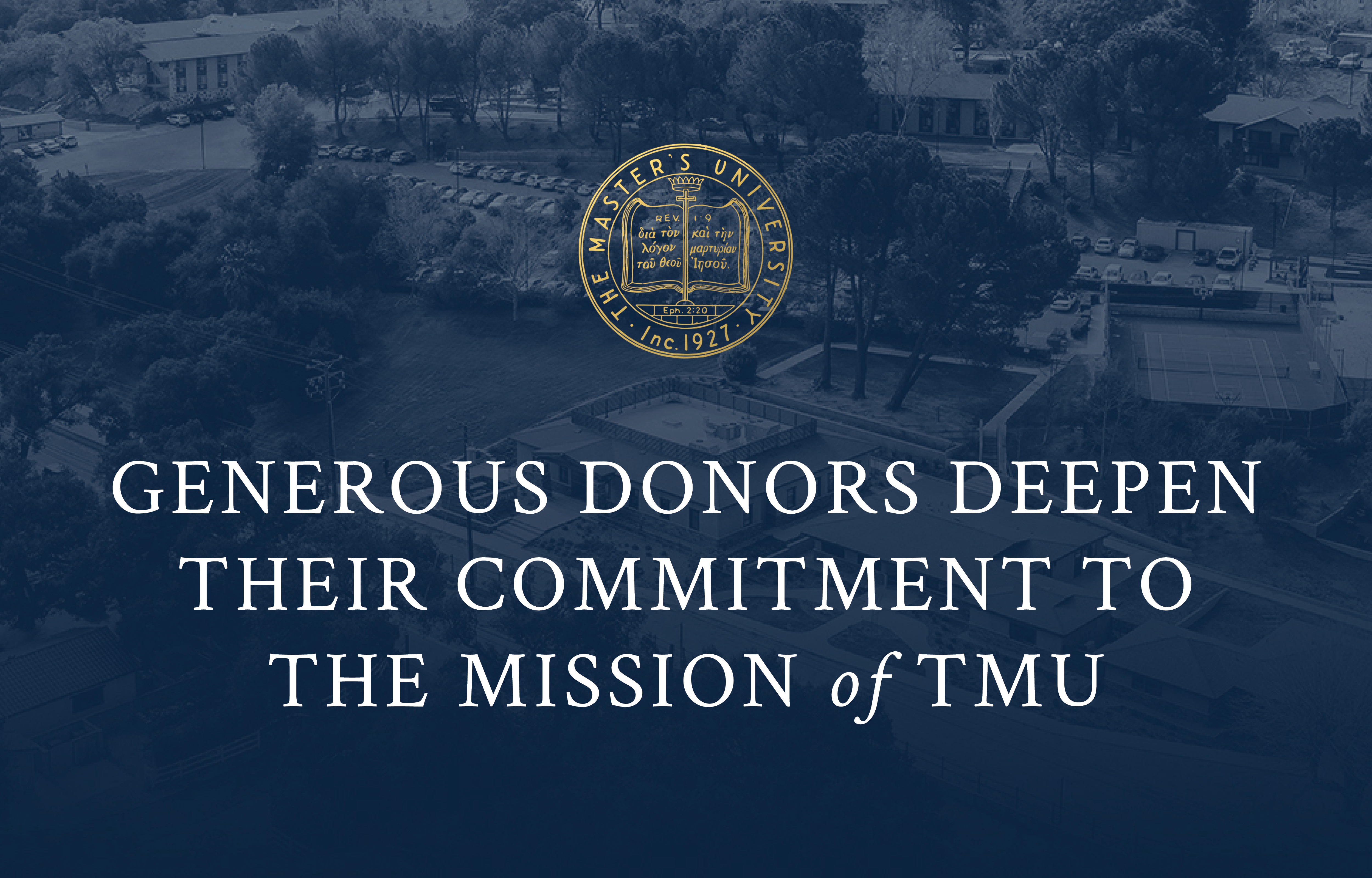 At The Master’s University’s 94th commencement ceremony in May, Dr. John MacArthur stepped to the podium and delivered a promising forecast.

“We’re about to launch into the greatest days that this university has ever known,” TMU’s chancellor said.

MacArthur could speak with such confidence — despite largely uncertain and turbulent times across the country and the world — for two reasons. For one thing, he has seen the Lord provide for TMU many times during 36 years at the University. He believes God’s blessing has rested on Master’s because of its faithfulness to Scripture.

The other reason for MacArthur’s unshakeable optimism was the commitment and zeal that donors have shown for TMU’s mission.

At record levels, generous men and women have partnered with TMU to equip the next generation of students for lives of faithfulness to Christ and Scripture. These people have given sacrificially, believing God will use their gifts to further His Kingdom.

These funds, part of an uptick in giving over the last five years, a span in which the school’s endowment has grown by 178%, have paved the way for student scholarships, campus enhancements and academic expansion. In other words, more students who are a great fit for TMU have been — and will be — able to receive an education that, in every area, is subject to the Word of God. The end goal is that graduates will go into the world as faithful parents, church-members, pastors, teachers, doctors, businesspeople, journalists and musicians, impacting those around them for Christ.

It goes without saying that TMU is incredibly grateful to the Lord and to the donors He has supplied.

“The Lord has used His people over and over again to provide,” says Luke Cherry, TMU’s vice president of development. “The last five years have been an incredible testimony to His provision through faithful individuals who want to steward their gifts in a way that honors the Lord.”

In recent years, TMU has experienced generosity that is largely unrivaled by peer institutions.

Cherry believes the upward trend can be attributed, in part, to the fact that donors recognize how uncommon it is these days for a school to hold firmly to the authority and sufficiency of Scripture in all things.

“There’s an urgency,” he says. “TMU’s donors realize this is an extremely unique institution, and they’re willing to sacrifice to protect what goes on here.”

The donations have made a significant impact.

During the 2020-21 school year, TMU’s donors contributed to $9.3 million in overall student aid offered by the school. Since fall 2018, Master’s has provided $23.6 million in total aid.

For students like Ellison Roberts, a junior liberal studies major, that money can be the difference between whether or not they receive an education based on a biblical worldview.

In high school, Roberts wanted to attend TMU but didn’t believe she could make it work financially. So, she enrolled in a secular college before donor funds opened the door for her to transfer to TMU.

She says her time at Master’s has softened her heart toward the Lord and His people.

“I just want to thank the donors who helped me come to TMU,” Roberts says. “Thank you for your generosity and thoughtfulness. It has impacted my life and my walk with the Lord in so many ways. I’m really thankful for that.”

Another area in which TMU’s donors have made a considerable impact is in campus enhancements. Alumni who graduated as recently as five years ago often find it hard to believe the transformation the school has undergone. In recent years, Master’s has invested significantly in its campus, aiming to enhance the student experience through extensive dorm renovations, the remodeling of the Department of Engineering and Computer Science and upgrades to more than a dozen classrooms. TMU’s library is also currently undergoing a significant remodel.

Harry Walls, TMU’s campus pastor, has been associated with the school in various capacities for more than 30 years. When he surveys the campus now, he’s awestruck. He believes Trophy Coffee and other student spaces, like the revamped Under the Oaks, supply the context for quality life-on-life discipleship.

“The lights in the trees, the beautiful staircase going up to the dorms, the barbecues and the fountains, these are all expressions of resources invested not only to beautify our campus, but to maximize the community experience that is essential for discipleship,” Walls says.

The idea, Cherry says, is that donors don’t want Master’s to miss out on students who are clearly a mission match, simply because the school doesn’t offer their major.

And that, really, returns to the heart of the matter. Supporters of TMU want to remove barriers that would keep Christ-followers from receiving an education that will prepare them to excel in the workplace, the church and the home — all for God’s glory.

This commitment by donors has contributed to a record-breaking fall. This month, TMU welcomed more than 400 new students to campus, the biggest incoming class ever.

“It’s very humbling and staggering to see how the Lord has used the generosity of TMU’s donors to impact the University,” Cherry says. “We know God is going to provide for the institution, and it’s amazing to see how He’s provided donor support to strengthen us moving forward.”

To learn more about how you can partner with The Master’s University to equip men and women for Kingdom influence, click here.