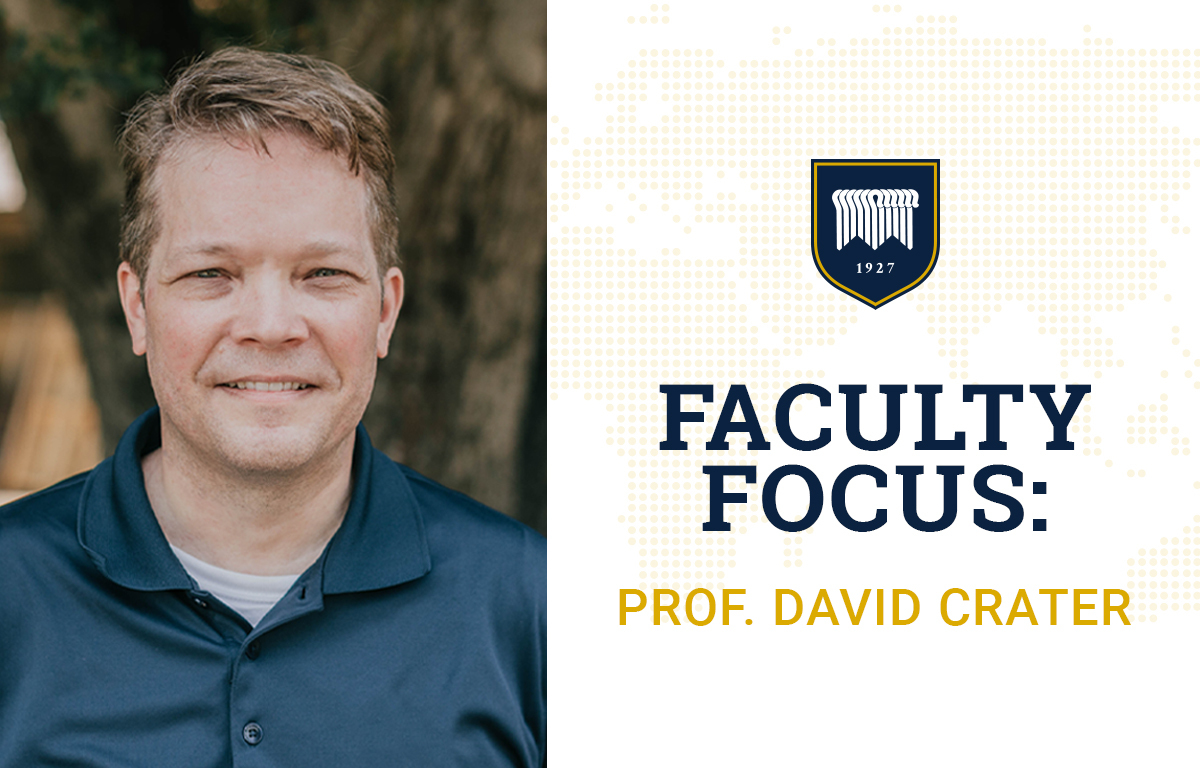 David Crater is no stranger to academia. But as someone who has worked for the Air Force, the Navy and the state legislature of Colorado, a professional career in higher education was not something he planned on.

However, as Crater now joins The Master’s University as chairperson and associate professor in the Computer and Information Sciences department, he is excited for the opportunity to use his diverse experience to help serve TMU’s students.

“I was always a math and science type guy,” Crater says. “And I was interested in the military.” When it came time for college, that combination made pursuing an electrical engineering program on an ROTC scholarship seem like a natural choice.

During his undergraduate program, his interest in engineering and computers intensified. So after he earned his bachelor’s degree, he decided to continue on and earn a master’s in electrical engineering, with an emphasis in computer architecture and a minor in computer science.

Crater then began a professional career that has included a host of high-profile employers. Over the years, he has worked with the Air Force (as an officer and later a contractor), the Navy, the state legislature of Colorado, and briefly, the U.S. House of Representatives. His duties have included work on satellite and electronic warfare systems. He’s been a software engineer in defense and intelligence satellite systems.

All the while, Crater’s passion for learning drove him to continue earning master’s degrees — specifically in the areas of business administration, divinity and theology.

“I’ve always had an interest in doing something other than military contract work,” he says. “I didn’t know quite what, but I knew I wanted it to be related to the church and to ministry somehow. That’s kind of why I did the theology education, building out my own faith and my own knowledge of the Bible.”

After moving to Los Angeles and beginning to attend Grace Community Church, Crater learned about the opening in TMU’s Computer and Information Sciences department. Mildly curious, he sent in an application. During the conversations that ensued, his curiosity morphed into genuine excitement — in part, because of the people he met at TMU.

“The faculty are not just academically sound; they have active faith lives, and they have personal devotions, and they speak intelligently and warmly about their relationships with the Lord,” he says. “Being in a Christian ecosystem again and being able to talk about issues of faith, and learn from other Christians, and worship with other Christians, and do that as part of a vocation is a super attractive thing for me.”

In the end, Crater decided Master’s was the place he wanted to be. He is especially excited about sharing his expertise in artificial intelligence, which he considers “the hottest area of computer science right now.” TMU’s AI program is pending WSCUC approval.

“What we’re basically doing in artificial intelligence is trying to recreate the brain, and that is no small task,” says Crater, who is in the process of earning a master’s degree in software engineering that dealt extensively with AI. “And it leads a person of faith like myself to marvel at the complexity and genius of the brain, as demonstrated by the difficulty of even mimicking a small part of it. It takes armies of Ph.D.s to do it well.”

Crater believes an understanding of AI should deepen a believer’s convictions, faith and understanding of Genesis and “what happened at the creation event.” He hopes to help his students view their studies in computer science as an opportunity for wonder and worship. He is also excited to learn from and serve alongside Dr. John Eickemeyer.

“Dr. Eickemeyer is a great man who has chaired the department singlehandedly over basically the last decade, so I’m excited to help him, and he’s excited to have the help — to have a teammate,” Crater says. “From our interactions, I think he’s going to be a perfect teammate, and just a delightful person to work with.”