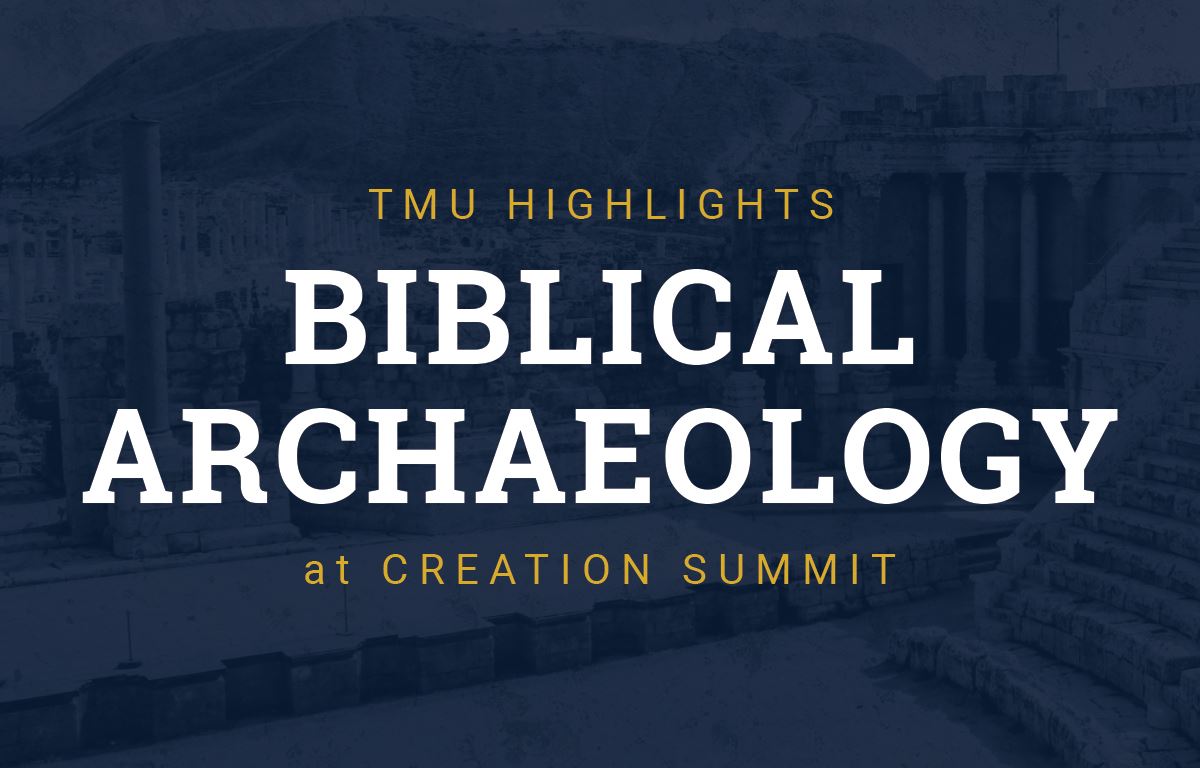 On February 29th , TMU hosted the 27th annual Creation Summit. Every year, speakers from various scientific disciplines have spoken on issues relating to creation research, exploring the various implications of a biblical understanding of Earth’s origins. However, this year’s lectures didn’t focus on geology, paleontology, or any of the other usual suspects. Instead, it highlighted something quite different: archaeology.

“So, I was put in charge of the Creation Summit a couple years ago,” says Dr. Matthew McLain, Associate Professor of Biology and Geology, “and I wanted to try and do things that we hadn’t done before . . . And we’ve never done archaeology—which is funny, because, when you think about research that works alongside what we believe from the Bible, archaeology is number one.”

The hiccup, of course, was that no one in the Biological and Physical Sciences Department had ties to the field of archaeology. For help, they turned to their colleagues across campus in the Biblical Studies Department—and specifically to resident archaeology expert, Dr. Todd Bolen.

Dr. Bolen taught for over 11 years in TMU’s IBEX program. During this time, he gained a deep familiarity with archaeology, and he helped introduce numerous Master’s students to the field. Some of these same students went on to study archaeology further after graduating from Master’s.

So, when Dr. McLain asked him about Christian archaeologists who might like to speak, Dr. Bolen reached out to two IBEX alumni: Drs. Chris McKinny and Seth Rodriquez. Since he’d first met them in IBEX, they had both gone on to earn their PhDs in archaeology and begun teaching the field to a new generation of students.

They, of course, were happy for the opportunity to speak at their alma mater. Together with Dr.Bolen, they decided to teach on the period of Israel’s monarchy. Looking as early as David to as late as Hezekiah, Dr. McKinny and Dr. Rodriquez discussed many of the key discoveries in biblical archaeology, as well as recent insights from the past couple years. Dr. Bolen also spoke, taking a break from Israel’s monarchy to bring people on a photo tour of Susa, the setting of the Book of Esther.

For the other IBEX alumni in the room (and there were several), many of the photos and the names were delightfully familiar. But for almost everyone in the room, the amount of new information was staggering.

“That’s one thing, I think, with all the talks: they were loaded with data,” observes Dr. Bolen. “There’s just all this information. You know, some of the slides are just jam-packed with all these points.” He hopes this left an impression on those who attended.

“I would hope our students would come away with a greater appreciation of how much has been found . . . So you just think, ‘Wow, there’s a lot out there that I don’t know. There’s a lot that I didn’t hear about in OT Survey,’ you know, because you may not realize that OT Survey is super short. And so the professor just has to skip over lots of these things. But it’s there.”

Dr. Bolen explains the unique value of studying biblical archaeology: “The Bible is very selective in what it includes. It’s not trying to give us a description of the houses people lived in and the clothes that they wore and the tombs they were buried in. But we want to know that. It’s not necessary for salvation, but it gives us a fuller picture. It reveals things that they didn’t need explained, because that was their world. So for us, it explains a lot of things that have been lost because of time and distance.”

Bringing our understanding of the biblical world into full color resolution is the unique gift that archaeology offers. This use of archaeology is in contrast to how some have viewed it: as simply a tool for “proving” the Bible.

“This is a mistake,” says Dr. Bolen, “and so the speakers addressed it. We can’t say archaeology proves that the Bible is true, because archaeology can never prove theological truths. It cannot prove relationships between people, or between God and people.”

As with prior Creation Summits, one of the most valuable lessons was a correction against what Dr. McLain describes as “belligerent apologetics”: an approach to science that only sees it as useful wherever it can be used to prove the secular perspective wrong, or the biblical perspective correct. Treating any science this way demeans its true value.

As Dr. McLain says, “What we want to show people is that there’s value in this stuff, besides just the apologetic side of it . . . I was really thankful for the speakers we had this time, because they really did emphasize one of our big things we try to emphasize every year with people: it’s not our job to prove the Bible. And [science] can’t prove the Bible right, anyway. It’s not possible, because that’s not what this does.

“It doesn’t matter how many experiments I do; I can’t prove whether Jesus walked on water or not, because that’s not a possible thing to study in science. So I was very thankful for the speakers stressing that.”

Instead, like any human science, archaeology is best used as a means of enjoying God’s creation and glorifying his name by doing excellent work.

Next year, Dr. McLain says that they’re going to explore a more “creepy-crawly” side of creation by talking about parasites. He’s excited for the opportunity to discuss the problem of evil, and to explore why creatures like fleas and tapeworms even exist.

“What does it mean, for God to make things like that? Because we read in Genesis that the creation is good. And this is something people have struggled with for hundreds of years.”

To learn more about past Creation Summit topics, read this Q&A connected to 2017’s conference.