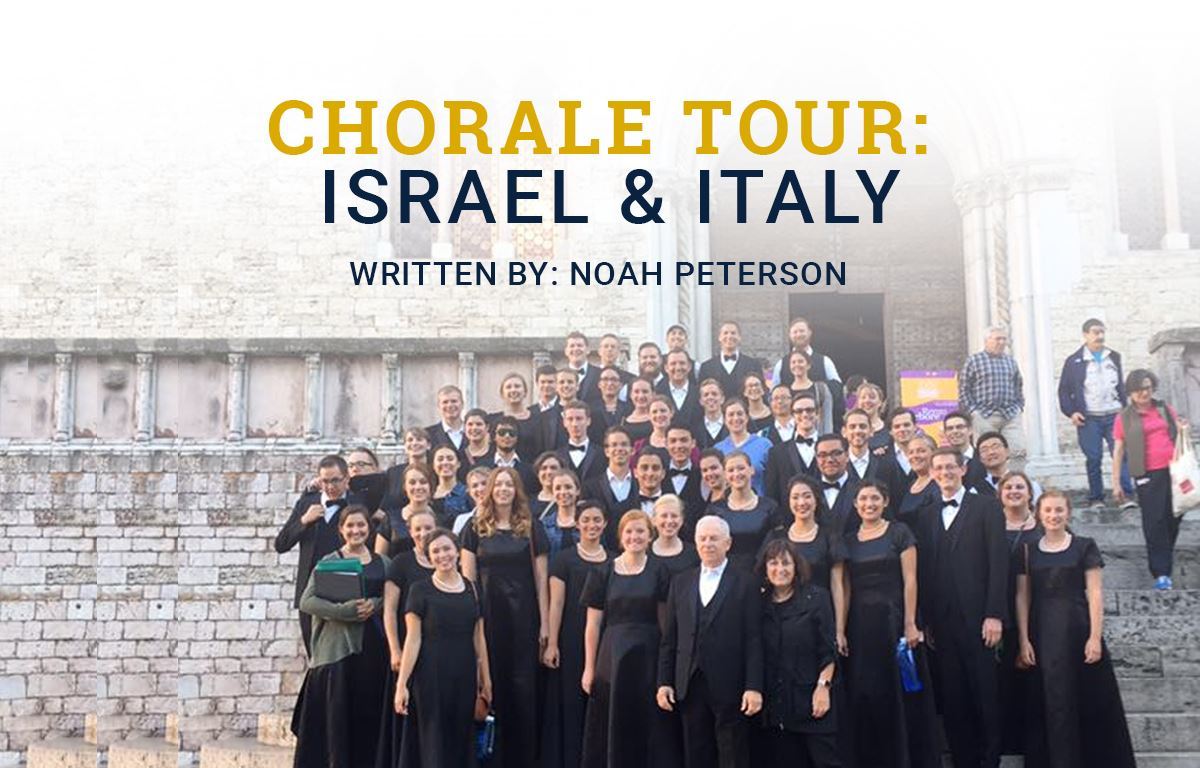 The Master’s University Chorale used these gifts to encourage local churches and witness to unbelievers on their three-week-long concert tour through Israel and Italy this summer. They traveled 21,818 miles through two countries, singing in locations from an LAX airport terminal and an Israeli McDonald’s, to Christ Church and the Pantheon.

The first part of the trip brought Chorale to the land of God’s chosen people: Israel— a place where Chorale’s reputation made for a highly anticipated return. One Jewish mother told IBEX Professor Bill Schlegel that she wanted her children to go to the concert at Yad Hashmona “just to see the obedience and discipline of the Chorale members to the director.”

And this year’s group did not disappoint. Chorale’s first two stops were Christ Church and Yad Hashmona’s Events Hall, where Christians and Jewish believers filled these venues to hear our students sing. According to Chorale conductor, Dr. Paul Plew, those in attendance lauded Chorale’s concerts as “inspiring,” “amazing,” and “a spiritual experience.”

The trip was filled with memorable moments, including the one that occurred in the coastal city of Ashkelon in Israel. Late last year, Chorale’s Angelina Korotki was in a horrific car accident that almost took her life and left her with the real possibility that she’d never walk again. Chorale member, Brian Gibson, recalls that the group visited Angelina in the hospital and sang “I Need Thee Every Hour” to her. Now, just months later, she was standing in her home church in Ashkelon, singing “I Need Thee Every Hour” with her classmates. As Dr. Plew put it, the experience was “a little bit of heaven on earth.”

The second portion of the trip took our Mustangs to the headquarters of Catholicism where they sang an impromptu concert at the Pantheon in Rome before visiting The Church of the Holy Stairs. Catholic tradition holds that if you ascend the Scala Sancta on your knees, it serves as a plenary indulgence. While inside the church, Dr. Plew quietly gathered the group together and they began to sing “A Mighty Fortress is Our God,” a nod to the hymn’s composer, Martin Luther, who attacked the doctrine of indulgences in his 95 Theses.

Chorale’s ministry on this trip contrasted markedly with what students were accustomed to. Hannah Gibson, a recent TMU graduate and member of Chorale for four years, was “struck by the fact that our job was a different kind of ministry. I wasn’t going to be able to talk to every audience member, or spend weeks with one church encouraging and ministering, but that was not our mission. Instead, we were pushing forward the ministry of those we were representing…” Similarly, Brian Gibson added, “We were ministering to believers who live across the world from us, in a culture that is completely foreign to most Americans…Even when we didn’t speak the same language, we knew we worshipped the same God and had the same beliefs. Those are brothers and sisters that we will rejoice with for eternity.”

Members of Chorale discovered that singing bridged communication barriers, and song effectively proclaimed the Word of God to different cultures. Anna Martin, a junior entering her third year in Chorale, was surprised by “how much of an impact music can [have] when it comes to spreading the gospel and opening doors. It’s true that music is a universal language and I saw that play out during our three weeks overseas.”

Our students’ dedication to a successful trip was reflected in their tireless preparation, which included hundreds of rehearsal hours and countless prayer group meetings.

Chorale Secretary, Erin Greene, told them a story about the fruit those efforts can produce: “After one of our concerts in Israel, I met a young man who was originally from Sweden. He told me that he had heard The Master’s Chorale sing 12 years ago while he was visiting Israel. He had just become a believer that year and the Chorale concert had a huge impact on him. He received one of our CD’s and took it back with him to Sweden. That year was one of the hardest years of his life. He experienced many trials and struggled with depression. He told me that he listened to that CD every day and that it provided him with encouragement to keep strong in his faith. Twelve years ago I doubt the Chorale that year could have guessed the impact God would use them to make on this man’s life. And now, twelve years later, he is still walking with the Lord and being encouraged by the Chorale’s message of the gospel.”

Sadly, with the close of the summer trip came the last traditional “You are the Light” performance for this Chorale group. Akaylah Kothman, a senior in her second year of Chorale, described the feeling this way:

You realize that the experience is over. This particular Chorale will never sing together again. Some of the seniors will move back home and never see the rest of the group. Everyone cries, because you really realize what a precious family you have in the Chorale.