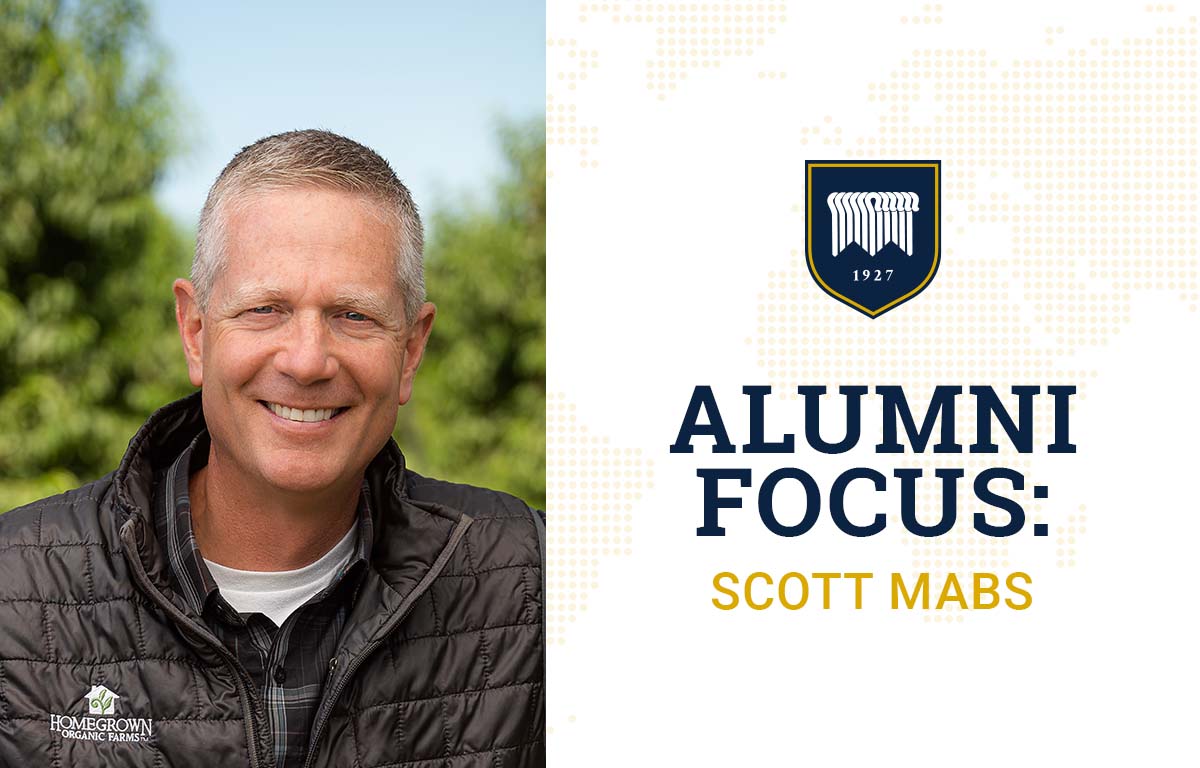 Editor’s Note: This story originally appeared in the July edition of The Mustang Connection, the official magazine of TMU.

Scott Mabs never set out to be the CEO of an organic fruit company that’s based in one of the most productive agricultural regions in the world.

In fact, when Mabs graduated from The Master’s University in 1995, he says he still didn’t know precisely what he wanted to do.

What he did know was that he wanted a challenge. He wanted to learn. He wanted to apply the skills and abilities God had blessed him with in a way that would allow him to provide for his family. And to do it all while prioritizing Christ, the church and relationships.

By all accounts, Mabs has checked each of those boxes during a career that’s taken him first to Indiana — where he received a crash course in business — and then back to his hometown in California’s San Joaquin Valley, where he now leads Homegrown Organic Farms.

The company harvests and packages thousands of acres of citrus, blueberries and tree fruit on behalf of more than 100 farmers, selling the produce to retailers like Costco and Trader Joe’s. The business has continued to grow, and it falls to Mabs, as CEO, to set a vision for the future.

Still, he says he never saw this coming. His goal was only to be faithful.

“I really just took one small step after another,” he says. “I kept following the Lord, and I ended up here. But I didn’t write my story.”

The San Joaquin Valley stretches north from Bakersfield up toward Sacramento. But the area’s agricultural shadow extends much further. According to a state report, the valley produced $36.5 billion in agriculture in 2019. “It’s the number one ag center, literally in the world,” Mabs says.

It was here — in tiny Ducor, California — that Mabs grew up on a citrus ranch. He spent many days spraying weeds and checking irrigation, with temperatures often reaching 100 degrees. In the process, Mabs learned two things: the value of hard work, and that farming wasn’t something he wanted to do forever.

It was also around this time that God revealed something else to Mabs.

For years, he’d wavered between following Christ and running after the world’s temptations. But after his junior year of high school, Mabs committed to wholeheartedly following Christ.

As a result, he decided to attend The Master’s University to receive a firm grounding in biblical truth. The plan was to stay for a year or so. But because of the godly friendships he formed and the teaching he received, Mabs found it impossible to leave. He enjoyed learning about God’s creation from biology professors who were in lockstep about the age of the Earth and the way the world came to be. He began to submit to the Bible as the authority over every area of his life.

“I had ideas of going to a (state school) to get a diploma with a name on it that might be recognized in the world system,” Mabs says. “But really it came down to understanding that I just need to trust the Lord, and He’s going to provide what I need.”

Something else kept Mabs at TMU, too.

During his sophomore year, he met his future wife, Christy. “After that, I wasn’t going anywhere,” he says.

Scott and Christy met as students at TMU.

Scott and Christy married shortly after graduation and moved to Indiana, where Christy’s parents lived. There, Scott landed a position at Endress+Hauser, a global instrumentation company. The job didn’t directly correlate to his degree at Master’s, but Scott found that he’d been equipped with a bevy of relevant skills. At Master’s, he learned to think critically and to problem-solve, and he’d navigated some of the school’s most rigorous classes as a biology student.

Endress+Hauser was more than happy to supply knowledge specific to its industry; Scott was ready to soak it up.

Over the next five years, Mabs worked in customer service, product management and business development. He earned promotions and positioned himself for further growth.

There was just one problem: the company wanted him to travel 40% of the year. With a wife and two young children, Mabs said that was untenable. He decided to trust the Lord and look for a new job — even if, by the world’s standards, that meant taking a step backward.

“Every time there’s a decision to be made,” Christy says, “it’s always been weighed in light of, does it line up with our priorities?”

In July, Mabs appeared on the cover of The Mustang Connection, TMU’s official magazine.

As it turned out, the best opportunity for Mabs was in California. And by the time he returned home to the San Joaquin Valley, his perspective on farming had changed. He saw that there was a place within the industry for his business acumen.

After working for two companies that helped him understand the lay of the land, he came to Homegrown Organic Farms in 2008. He was thrilled to work for owners who ran things based on Christian values.

After five years as the director of sales and marketing, Mabs became CEO. Since then, the company’s yearly sales have grown considerably, and it now sells and markets organic fruit on behalf of 120 growers, representing roughly 7,000 acres of farmland.

The success hasn’t changed Mabs’ focus. After his promotion, he helped the company codify and communicate its mission statement. “Our mission is to exceed our customers’ expectations, to return the best money back to the grower, and to display the love and grace of Jesus to all,” he says.

Relationships are crucial to any business. But at Homegrown, they’re also a vehicle for the gospel.

“We have a job to do, you bet. We have expectations that we want our team members to meet,” Mabs says. “But these are people who need to understand who Christ is. Whether or not they believe in Christ as the Son of God, they have to make that decision. But I want them to at least understand who He is and what the gospel is about. Living out the gospel in our actions and helping people be thoughtful about that, that’s our task every day.”

Scott and Christy, far right, returned to TMU in May for the graduation of their son, Trent.

Mabs has also maintained his commitment to his family and the church. He serves as an elder, and he continues to prioritize time with Christy and their four children, two of whom have graduated from TMU, with another enrolling as a freshman in the fall.

Mabs encourages his employees to keep a similar life-work balance.

Mason Brady, Homegrown’s chief financial officer, remembers his first week on the job in 2014. At around 4:30 p.m., Mabs encouraged everyone to go home to their families.

“In the agriculture business, I’d never heard of that,” Brady says. “Scott really wants us to have healthy lives at home.”

What Mabs wants more than anything is to continue to faithfully pursue Christ.

“The only reputation worth having is for God to say, ‘Well done, good and faithful servant,’” he says.

If you or someone you know would like to be equipped for a life of eternal influence For Christ & Scripture, we’d love to tell you more about TMU.