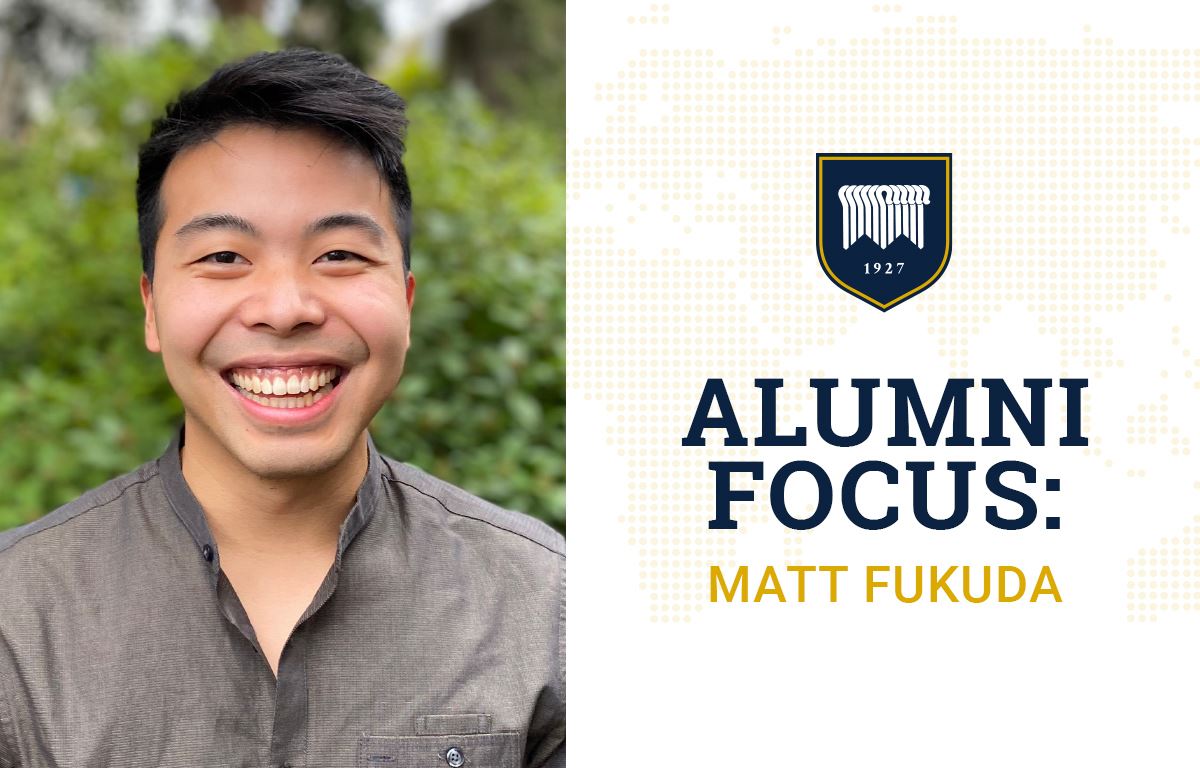 When Matt Fukuda was in high school, he came down from his home in Seattle to visit a few Christian colleges in Southern California. He had an interest in medicine, and he liked the idea of sunny Los Angeles weather, but he had no specific ideas about where he wanted to go and what he wanted to do during (and after) his college years.

One of the schools Matt visited was Master’s. “I heard about Master’s through the pastor at my home church,” he says. When he saw the school for himself, he was struck by how genuine the people were.

During the visit, Matt’s campus guide was Josh Tejada. Matt remembers getting to know Josh over the course of his visit, seeing how sincere he was about his faith and his relationships. “That was really what sold me . . . I don’t even know if he knows this, but he played a big part in me coming to Master’s.”

Matt came to Master’s as a Pre-Med major. For a long time, he’d thought he might want to work in the medical field. But he says it wasn’t until he went on a GO Trip to Togo, Africa that his passion really sparked.

“I got to see how much good someone can do as a Christian physician—especially in a place like Africa, where there’s such a great physical and spiritual need. I was able to see how a couple of American doctors were able to go in there and use their skills to not only treat people’s physical needs, but also care for them spiritually. I thought that was such a cool avenue for the gospel.”

Matt saw how their patients were often more open to spiritual conversations when they were facing deep distress and the reality of death. It made a tremendous impression on him, and when he got back to the States, he was determined to make a career of medicine.

Now, as Matt continues his medical education at Loma Linda University, he’s preparing to step into one of the toughest corners of the healthcare system. “I’m going to be working in the emergency room. It’s going to be pretty intense!”

For Matt, the ER isn’t an arbitrary choice. “Jesus said in Mark 2 that it’s not the healthy who need a physician, but the sick. And in the ER you definitely get the sickest patients, and the patients who are the hardest to treat. Oftentimes they’re the homeless—people that society has cast aside . . . You’re able to show Christ’s love to these really sick and poor people from corners of society that you otherwise would never get to talk to.”

Matt is getting to the point in his medical training where he’s working shifts in the ER, and despite the occasional chaos of the environment, he feels entirely at peace with where the Lord had brought him. He appreciates how every day forces him to stretch his creativity and his empathy in order to give patients the best possible care. Looking back, he also appreciates how Master’s has served as an indispensable foundation for his current ministry.

“In addition to that, I feel like my time at Master’s really solidified my faith and deepened my love for God on a really personal level. I think that’s what makes Master’s unique; even though you get the best education and the best training, you also grow so much personally . . . I’m super grateful that God brought me there. Thinking through what I want my life to look like in the future, Master’s was instrumental in shaping that.”

The Value of Learning