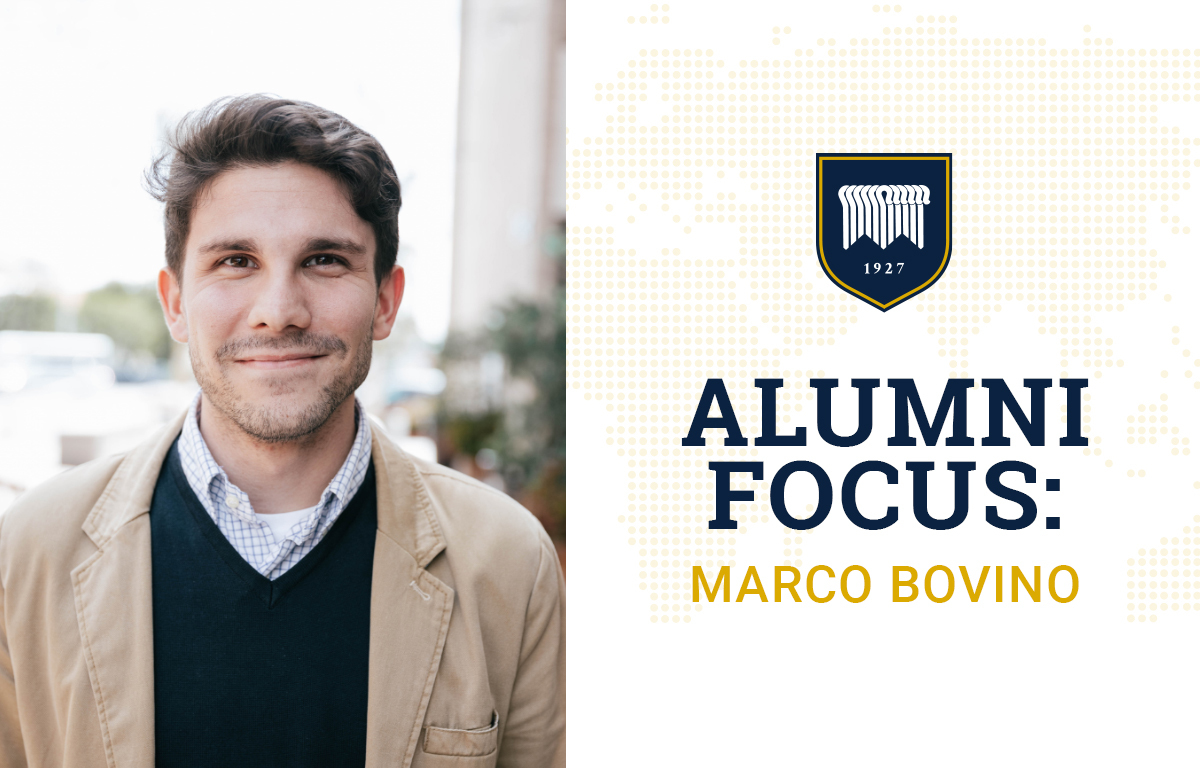 Marco Bovino was born in Milan, Italy. And like many Italians, he was raised Catholic. Really though, Bovino says he was an atheist for much of his childhood.

That he would go on to graduate from The Master’s University—a school that stands for Christ and Scripture—before attending The Master’s Seminary was most unlikely.

“I wasn’t buying into any sort of religion,” Bovino says. “Neither were my parents. … It was rare that the whole family would go to church. I have no memories of us doing that.”

Growing up, Bovino went through all the motions of Catholic faith; he was baptized, he went to Mass, and he participated in communion. But seeing how his parents and his school treated religion, he had little reason to believe there was much truth to it.

However, there was an international missions agency that ran Christian camps in Italy. Through these, Bovino got his first glimpse of genuine Christianity. He was intrigued by what he saw, but his heart was slow to truly believe it.

“I made a profession of faith when I was 15 or 16. And then for a few years I lived thinking I was a Christian, but actually being deceived,” he says. It wasn’t until Bovino was 19 that his eyes were finally opened to the gospel he had claimed to accept. And when that realization did come, it came with the power of transformation.

“I repented and believed, and the Lord gave me such a strong desire to know what the Bible actually says. … And so, because I wanted to know Scripture so much, and I had this desire to study the truth, it then brought to my heart the desire to teach it to people and make sure that people were not falling into the same deception that I was,” Bovino says.

At first, Bovino wanted to be a missionary. He began traveling to places like Argentina and Hungary, studying the Bible and preparing for international missions work. While he was studying, though, he was struck by the importance and preciousness of the local church as described in Scripture. His original dream of bouncing from place to place preaching the gospel began to shift into a different dream: to find somewhere he could teach and shepherd people, and then be faithful to that place.

Around the same time, Bovino began to teach himself English. As a Bible student, he wanted to have as many study resources available to him as possible—and a great many of those resources were only available in English. He turned to the best English textbook on the market: YouTube. Specifically, Bovino learned English by listening to hours upon hours of sermons by Dr. John MacArthur.

“As I was learning English, I realized that he was teaching the Bible in a way that I hadn’t heard before. And so that gave me the desire to come,” he says.

After hearing that MacArthur was connected to The Master’s Seminary, Bovino reached out about the prospect of applying. But he didn’t yet have a bachelor’s degree, so he was referred to The Master’s University. He loved the idea of earning a bachelor’s in Biblical Studies, and he doubled down on his enthusiasm to come.

However, there was a problem. Bovino didn’t have the resources to make his new dream a reality. And even if he did, his English wasn’t strong enough yet. As much as he wanted to come, it simply wasn’t an option. So, he instead went to a Bible school in Budapest on a scholarship—his hope of studying at Master’s seemingly out of reach.

But by providential coincidence, Benj Foreman (a professor at TMU’s Israel-Bible Extension program) was teaching a class at Bovino’s school in Budapest. The men spent time together, and Foreman encouraged Bovino not to give up on Master’s.

So Bovino applied again. This time, Master’s—with the help of donors—was able to offer a significant scholarship. And that summer, Bovino jumped on a plane to California. When he landed, it was with an immediate feeling of belonging.

“The adjustment was not that hard,” Bovino says. “I’d been praying for three years to come here. Now I was here. So for me, it was a dream to be here—not because of America, because it didn’t matter where I was. I was in a place where I knew I was going to be trained well in knowledge of Scripture and in ministry. I was where I was supposed to be. So that made everything easier.”

Bovino’s experience at TMU didn’t disappoint, either. When he talks about his time here, he does nothing to hide his affection for the school.

“I love Master’s. I mean, I wish I would have been able to come earlier,” he says. “… My time at Master’s was priceless. There’s no value I can put on that. I met the most wonderful people that I’ve ever met in my life. I was poured into. I was able to serve in many different ways. I learned from my professors what it means to think critically about Scripture. I learned true fellowship.”

Bovino did everything he could to maximize his time at the school, serving as a resident assistant and having lunch with his professors every week. And now that he has graduated from TMU and gone on to The Master’s Seminary, he’s trying to do the same there.

He cherishes the opportunity to learn the art of preaching alongside men who share his passion. As for what comes next, Bovino is leaving it in the Lord’s hands.

“My life in the past five years changed so much,” he says. “I’ve been here and there. I wanted to do this and ended up doing that. … My desire is to go back to Italy and be in ministry. But what drives this desire is a profound love for the church. Therefore, I am not called to Italy; I’m called to serve the church. That’s how I see it. I would love to go to Italy because I think there is a need and I think, being Italian and speaking Italian, I can be helpful. But what I want to do is just be in the church and serve the church.”

Bovino does know one thing for sure, though: “My kids are going to come to Master’s!”