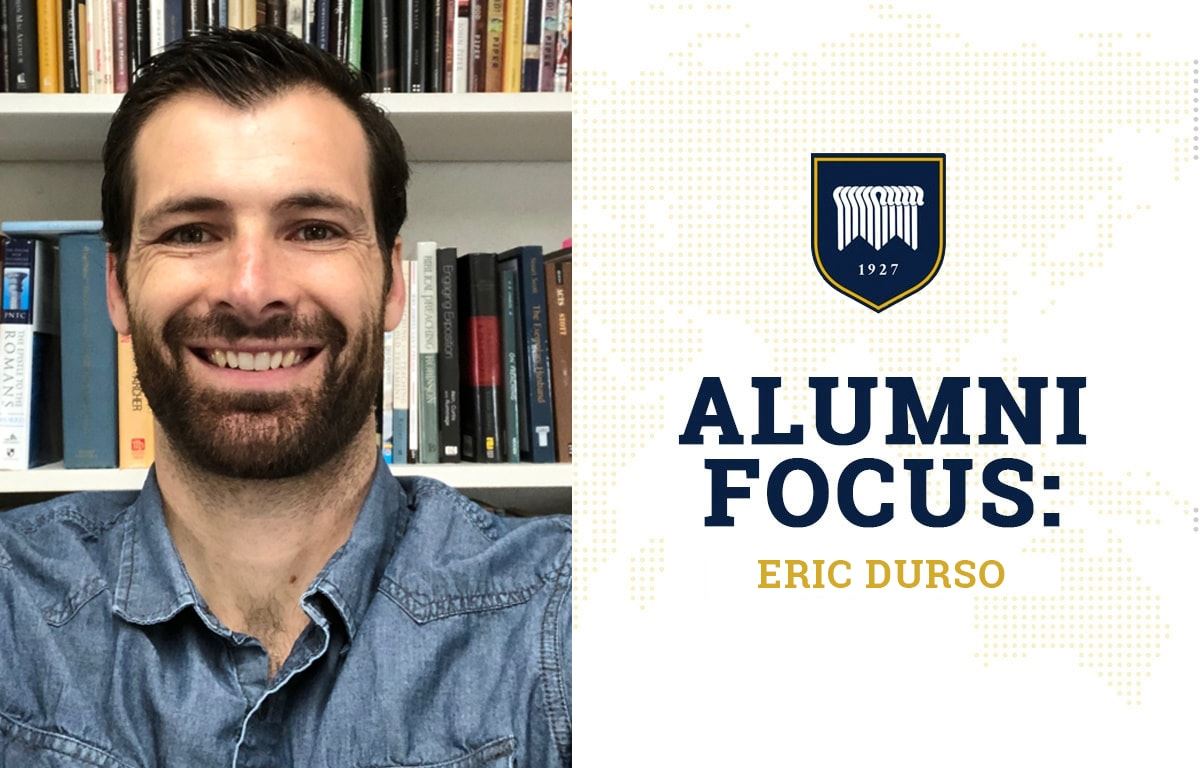 Eric Durso was raised in a Christian home and accepted Christ at a young age but didn’t always take his faith to heart.

It was during his experience at The Master’s University studying and playing basketball that God worked to strengthen his faith.

“God used several people, events, and books to humble me and deepen my understanding of the gospel and awaken my desire to serve Him,” Durso said. “Playing a collegiate sport can consume your life, but it’s a great way to learn perseverance, grit, and hard work under pressure, which are valuable lessons for ministry. It’s not the only place to learn those things, but God used my time (At Master’s) to imprint those values on my character.”

Durso graduated from Master’s in 2008, went on to graduate from The Master’s Seminary, and is now pastoring a newly planted church in Rancho Cucamonga called Grace Rancho.

In October 2017, the lead pastor of Grace Fellowship of Alta Loma retired from his position. The church had an older congregation, was down to around 20 people, and was considering closing its doors and selling its beautiful five-acre property in the hills of Rancho Cucamonga.

“At that point I was the Pastor of Student Ministries at Grace Church of Simi Valley,” Durso said. “We had been praying about planting a church in the Ventura area when we heard about the struggling church. After a lot of prayer and meeting with some of the people, we saw the opportunity to participate in a church revitalization as an answer to prayer. We began praying that God would stir in the hearts of some people to move their lives over 70 miles east — from Simi Valley to Rancho Cucamonga — for the church revitalization. We knew for many it meant changing jobs, selling and buying houses, pulling kids out of schools and finding new ones, and changing life altogether. The Lord stirred in the hearts of seven families to come for the work.”

Jordan Bakker, Lead pastor of Grace Church of Simi Valley said, “We could not be happier with what God has done in Rancho and how he has used His choice servant. Eric has demonstrated not only an aptitude to preach God’s Word with clarity, passion, and precision, but also a determined faithfulness to the church, his family, and the gospel.

“He was willing to risk leaving what was comfortable for something that was unknown, yet did so with confidence that God’s good hand was on him,” Bakker said. “It began with a willingness to go, a commitment to pray, seeking God’s will, and courage to step out and go to a place that needed a shepherd.”

Durso describes Grace Rancho as simple, biblical, faithful, and hospitable. Currently, the church has a membership class, children’s Sunday school, and some small groups that meet outside of Sunday meetings.

“We have a growing culture of discipleship, where we’re regularly getting together to help one another follow Jesus,” Durso said. “In the future we’ll have something more geared toward Junior High and High School students. We have a growing number of them now and we’re starting to think about how we want to start discipling them more intentionally.”

Durso hopes to serve Grace Rancho for as long as he can, building a foundation and relationships and waiting to see what God does with them. He believes the church is called to make disciples, which starts with evangelism and actively incorporates all the members of the church in this shared mission.

On reflecting on his time at TMU, Durso credits the steady flow of chapels for impacting him greatly and helping him build an understanding of the implications of the authority and sufficiency of Scripture for the church.

It was at TMU, where Durso met his wife Ashley. “Ashley is an amazing woman. I admire her in so many ways, and it’s because of her love for the Lord, the church, and me that I’m able to serve the church the way I can,” says Durso. “We have four children, Emma, 8, Ella, 7, Nora, 5, and Jack, 1. They’re my favorite people to be with.”

Durso tries to keep his approach to ministry simple. “I had been in student ministries for about a decade prior to Grace Rancho, and my basic understanding of ministry is that it’s the same for whatever age demographic you serve,” Durso said. “People need the Word, they need prayer, they need to be known and loved, and they need someone to be committed to them through life. In this sense, ministry is not complex, nor is it easy. Wherever I’ve served, I’ve tried to make those things the priority.”

“We try to encourage people to be aware of the various places God has put them and seek to demonstrate sacrificial, Christ-like love to friends, neighbors, coworkers, or family members, as God gives opportunity,” Durso said. “There is no formal, programmatic way to do this, but it happens when Christians act like Christians in their everyday lives.”