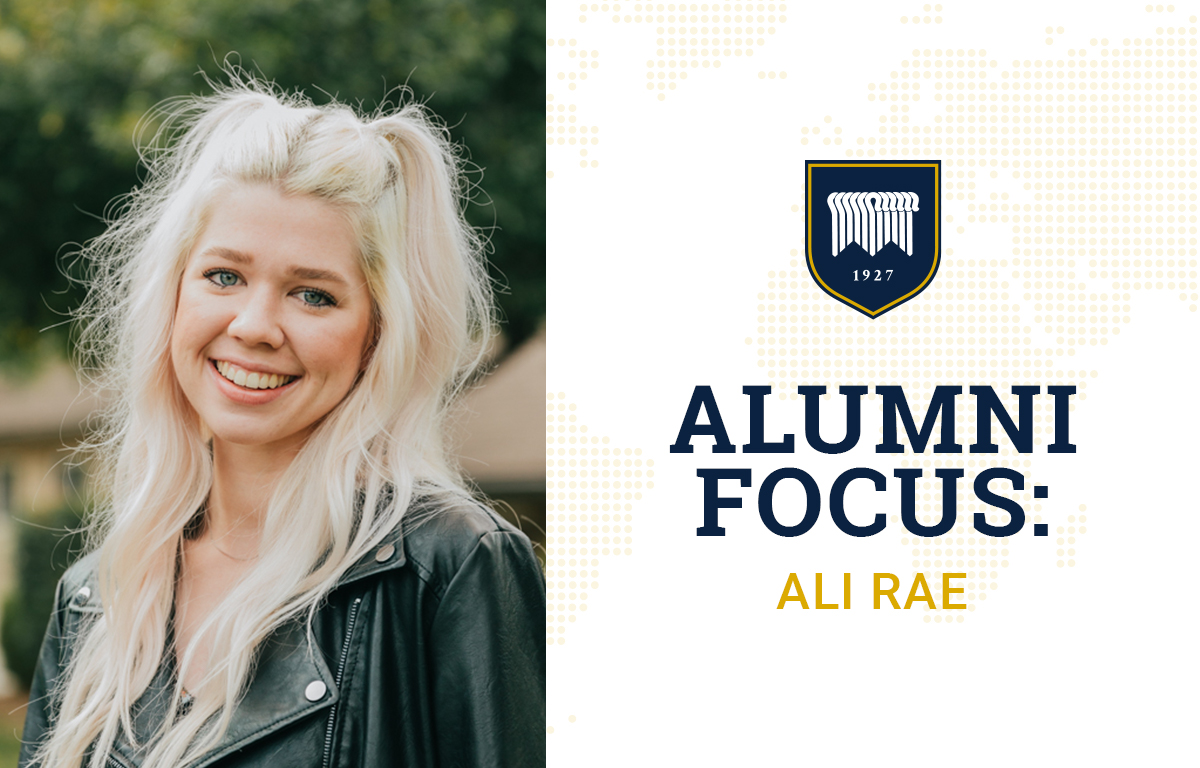 As the story goes, the name “California” may have come from a novel written by the Spaniard Garci Rodríguez de Montalvo. So, it is all too appropriate that Ali Rae (TMU, ’18) has returned California to its literary roots with her novel, “The Past is a Place in California.”

Rae has a deep history of her own with her story’s setting. Her parents attended The Master’s University (then TMC) and met while they were students, and her maternal grandparents attended the school when it was called Los Angeles Baptist College. Rae herself was born and raised in Santa Clarita, and she grew up wanting to follow in her parents’ footsteps by coming to TMU.

Ever since she entered her teen years, she also knew she wanted to write.

“I was a big reader when I was a young teenager,” Rae says. “I grew up reading ‘The Chronicles of Narnia’ and that kind of writing. And then I started reading middle-grade fiction — especially fantasy — and I really loved that. I think that’s when I fell in love with reading stories and wanting to write them for myself.”

When the time came for college, Rae entered TMU as a communication major in the creative writing & publishing program.

“My time there was really, really fruitful,” says Rae. “The Lord led me there, and I wouldn’t have wanted to go to any other school.”

Though she came knowing she wanted to write, she didn’t know precisely what sort of writing she wanted to do. But when she took Journal and Autobiographical Writing with Dr. Bob Dickson, that began to change.

“I had never read anything from that genre before,” she says. “But when we started reading through different works, I really fell in love with Joan Didion, and she’s become one of my favorite authors.”

Rae’s experience in that class inspired her to be more teachable and experimental when it came to her craft. It also inspired her to incorporate elements of Didion’s style into her own writing — namely an emphasis on setting. Didion’s masterful descriptions of California struck powerfully at Rae’s own experiences.

“It felt like I was reading about home,” Rae says. “And the fact that she can express the feeling of being in a certain place and have people say, ‘Oh yeah, that’s what California feels like,’ is what I really love about her.”

Though Didion’s style and themes continued to influence Rae’s thinking, it wasn’t until she was halfway across the world, taking part in the TMU Italy program, that the idea for “The Past is a Place in California” finally sparked.

“When we were in Florence, I had the idea for the first line. And then a week later, when we were in Venice, the picture of what was going to happen in the story just came to my mind — which is funny because I was the farthest I’d ever been from home, but the story was about places close to home.”

During her last semester at TMU, Rae began writing chapters of the novel for her Novel Writing class. Then in 2019, the year after she graduated, she self-published the book through Amazon. Dickson and Dr. Grant Horner, a professor of Renaissance and Reformation studies at TMU, both provided reviews.

Said Dickson, “Ali Rae writes with a depth and sensitivity that are rare in young authors. The characters she introduces are nuanced and genuine, lingering in the mind between chapters and calling us back to read more. This is a wonderful debut for a promising new writer.”

Horner’s feedback was also complimentary: “Ali Rae’s prose is slyly hypnotic, drawing you in slowly to a rich interior landscape of feeling and longing.”

Rae’s story, in echo of Joan Didion’s style, centers on place. Her protagonist struggles with a complicated homecoming as she returns to California from Arizona and faces memories from childhood and college.

“A big thing that I wanted to express in my book was that you’re never too young to experience grief and know what that feels like,” Rae says, “because kids and teenagers and young adults go through really tough things, too. It’s not just reserved for mature people.”

In part because of this emphasis on grief, Rae says that writing has been an exercise in empathy as she writes characters with personalities and experiences quite different from her own.

“It has helped me understand people around me better, which helps me form friendships — especially with unbelievers,” she says. “It helps me understand them at a deeper level so that I can witness to them and bring the gospel to them in a way that’s more appropriate for who they are and their personal experiences.”

Rae is currently working on a new trilogy of books. She is keeping the premise of this new series a secret, but she says that the story will be “very different” from her first.

For high school and college students who are hoping to write in the future, Rae has this piece of advice: “Be open to trying new things. It’s easy to pigeonhole yourself into different fields and different genres, but I think that can be really limiting. You never know what genre you’ll be good at until you try it. So, try everything you can and take classes that you probably wouldn’t take as your first choice. You never know — you might hate it. It might teach you that you shouldn’t pursue a specific thing. Or you might love it.”

You can find Rae’s book on Amazon, here. And to learn more about TMU’s creative writing & publishing program, click here.

How To Learn Anything