The Transformation of TMU's Campus Continued in 2021 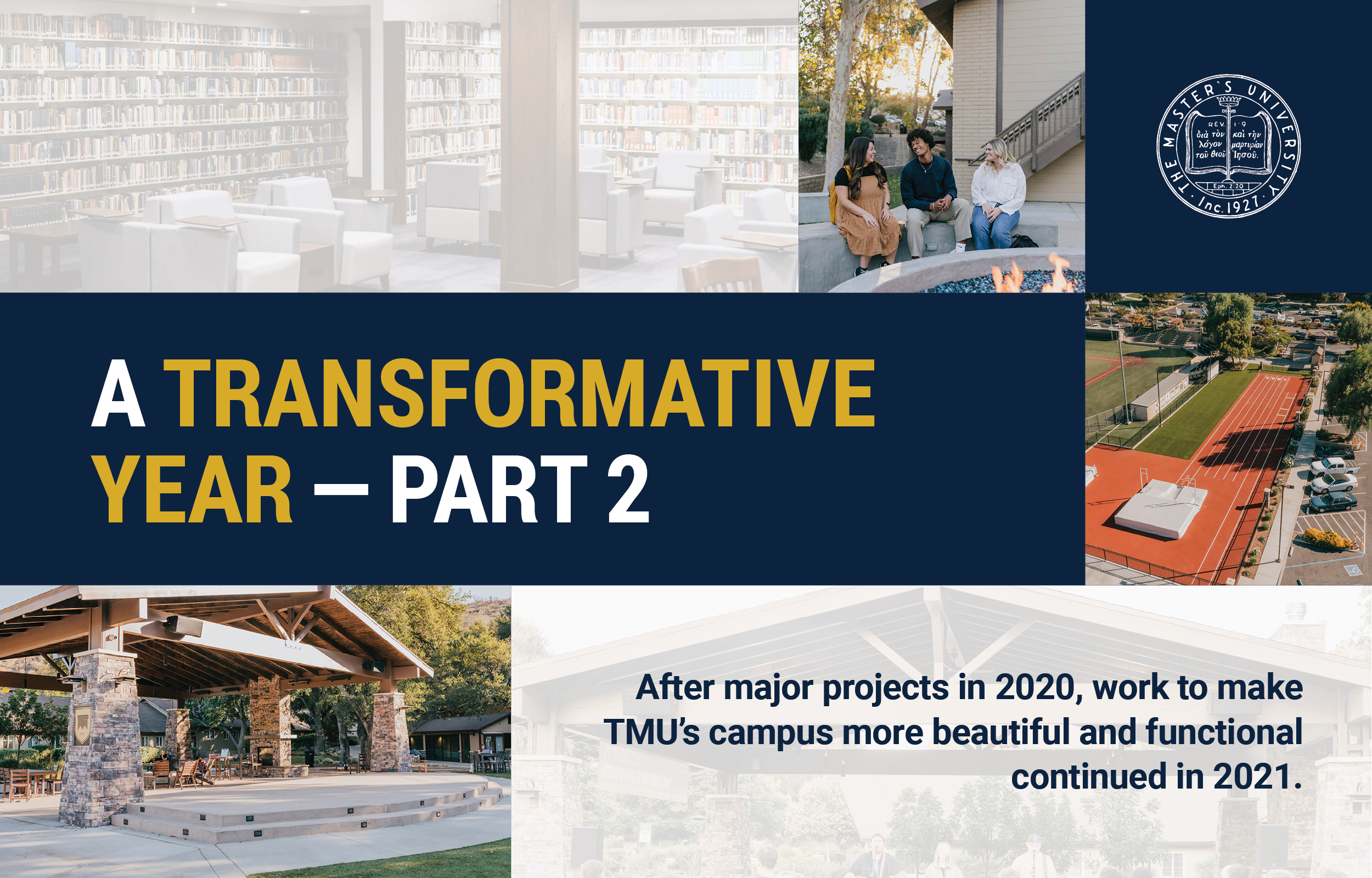 When Dr. John Stead joined the faculty of Los Angeles Baptist College in 1970, the school’s Placerita Canyon campus consisted of just nine structures: a library, a dorm, a gym, the president’s home, four academic buildings and an administration/dining center.

Since then, Stead has seen the construction of five dormitories, the purchase of Grace Baptist Church’s property, which now constitutes North Campus, and a long series of building projects, renovations and remodels.

Still, Stead — who now serves as executive vice president of what’s become The Master’s University — says he has never seen a more dramatic transformation of campus than what’s taken place over the past few years.

“This has been an absolutely amazing time for the University,” he says.

Stead’s comments came near the end of 2021, a year in which Master’s continued to beautify its home and increase its functionality — completing a bevy of projects highlighted by major renovations of the library and Under the Oaks. The school also constructed an on-campus track and field training center.

TMU’s overarching goal was to honor the Lord by stewarding the resources He has provided. Practically speaking, that meant using donor and University capital funds to update the campus so that it better supports TMU’s mission: preparing students for lives of faithfulness to Christ and Scripture.

“TMU is extremely grateful to the donors who have sacrificially committed their personal resources to make so many of these campus upgrades possible,” says Todd Kostjuk, TMU’s chief financial officer and vice president of administration. “Most of all, we are grateful to the Lord who has made all of this possible by moving in donors’ hearts and continuing to bless TMU financially.”

In 2021, TMU moved toward an open-space study concept in its library. The space nearest the front entrance is pictured here.

In November, TMU completed a major renovation of the Robert L. Powell Library, updating the space to align with modern learning.

“What we wanted to do, in partnership with the library staff, the provost and academic staff, was to see how we can better utilize the library for how students would use it today,” Kostjuk says.

That meant rethinking the building’s layout. TMU retired its two-story “ark” of study carrels and moved toward an open-space study concept, providing students with a variety of seating options and allowing a reasonable level of talking on the first floor (upstairs remains strictly a quiet zone). TMU installed seating equipped with USB and electrical outlets — for charging laptops and cell phones — and made more computers available for online research. One centerpiece of the renovation was the construction of three interactive huddle rooms.

That’s what four TMU students did one morning earlier this month. The group was working on a final project for a social media class.

All semester, they’d been curating Facebook and Instagram accounts that highlighted events across campus. In one of the library’s huddle rooms, they gathered to reflect on what they’d learned and to write an executive summary. One takeaway was that posting social media content consistently, writing good captions, using hashtags properly, and effectively wielding features like Instagram Reels took diligence.

“Now we understand that it’s not that easy,” said Steven Barrera, a junior communication major.

Around 11 a.m., the group realized its reservation of the huddle room would soon expire. “Should we extend it?” asked Jeremiah Yonemura, a freshman marketing media major, moving to the digital panel on the door to update the team’s booking.

Barrera was glad to stay a little longer.

“I’m an off-campus student, so to have this area is nice for meeting up,” he said. “Sometimes in the lower cafeteria, it’s too noisy. It’s nice to have a quiet space to all work together.”

Said Cam Specht, another member of the group: “With the old library setup, I preferred to study in my room. But now there’s variation in the library of where you can study: at a table, in a comfy chair, in a conference room, in the (Brody Study Pods) upstairs. And the library is big enough where you can squirrel yourself away.”

What stood out to interim President Abner Chou was the atmosphere created by the reimagined library, a space in which TMU exposed already-existent vaulted ceilings and installed new, consistent lighting.

“What I’m looking for in a library is a place that inspires people to deeply study and think about the things of God,” Chou says. “You’re looking for a space where, yeah, it’s serious, but it’s also joyful and collaborative. And that’s what you see when you walk into the library. You see plenty of places for students to sit and talk without interrupting other students. You see space where they can think and contemplate. And with the lofty, raised ceilings, it’s a very open and inspiring space.”

TMU made two other key additions to the library. Outside the entrance, the University built an open-air study area, with tables and a fountain. And inside, it created an office for TMU’s director of interdisciplinary studies, Dr. Whitney Gamble-Smith. Interdisciplinary studies is currently one of the most popular majors in the country, in part, because it allows students to, in a sense, design their own major. The library renovation provides the program with a settled home base.

Under the Oaks student space has always been, geographically speaking, a center point of campus. But after TMU completed a major renovation in August, the space is now equipped to function that way.

TMU leveled the outdoor space between Vider and King halls and went to work — building a large outdoor shade structure and installing a turf area for lounging, eating and recreation. TMU also equipped Under the Oaks with an advanced lighting system, Wi-Fi and a network-based sound system. This state-of-the-art equipment allows the space to accommodate events like View the U, TMU’s Week of Welcome, and Campus Life activities. Under the Oaks has also hosted occasional academic classes and chapel services.

“What we want to do is make it as multipurpose and functional as possible,” Kostjuk says.

Oaks Pavilion is the centerpiece of the renovated Under the Oaks student space.

A key function of the space is fellowship.

Says Chou, “Under the Oaks is a space students can go in a small group to hang out and have some of the richest conversations they’ll ever have, conversations that we pray will be used to shape their lives forever for Christ and Scripture.”

These are the same kinds of conversations Chou hopes students will have inside the soon-to-be-completed Oaks Lounge, a hangout space for TMU’s off-campus students — located just south of the shade structure, Oaks Pavilion.

TMU track and field coach Zach Schroeder believes his men’s and women’s programs are entering a new and promising era. Part of that prediction comes from the teams’ new digs. Last summer, TMU constructed a track and field training center located between the gym parking lot and the third-base side of TMU’s baseball stadium.

The facility consists of pole vault and high jump pits, along with four track lanes that can be used for pole runs, block training for sprints, and a portion of the 100- and 110-meter hurdle events.

The space’s long- and triple-jump runway terminates into a pit filled with premium sand. “It’s a jumper’s dream,” Schroeder says. “It will foster development of a stronger, more explosive athlete.”

As for the bigger picture, Schroeder believes the facility will help with recruiting.

“My dream has been that any track and field athlete who desires a world-class biblical education could find a home here at TMU,” Schroeder says. “Our new training center provides for exactly that.”

TMU also completed numerous other projects this year, including renovations of Vider Hall (which houses the school’s human resources, accounting and registrar offices) and of offices inside the Biblical Studies Center and the English and History Center. The school constructed student hangout spaces with firepits next to Dixon and Slight dorms. And it finished renovating the Engineering and Computer Science Center and all eight bathrooms inside Hotchkiss Hall. Waldock Hall’s lobbies and dorm rooms were also updated. Work on the Hotchkiss pool is expected to be completed early in 2022.

Kostjuk says many of TMU’s campus updates were aided by suggestions from across campus.

“We really had a lot of teammates and collaboration with people on campus who had great suggestions and ideas,” he says. “We incorporated a lot of their suggestions on how we can best utilize spaces around campus.”